A closer look at the magnificent tomb of Ong Sam Leong

What makes a cemetery so interesting such that it has enticed me to make multiple visits over a span of two months?

Aside from the fresh air and the tranquil environment, Bukit Brown is simply like a land with rich heritage simply waiting to be appreciated. Like Belinda Tan has pointed out during one of our visits, Singapore has its own rich heritage and significant artifacts right in own own backyard, and Bukit Brown is one place to find these.


One of the most magnificent tomb-sites simply awed me in terms of its size. The double tomb of Ong Sam Leong and his wife was said to be the size of 10 three-room HDB flat units. Ong Sam Leong (1857 - 1918) was an entrepreneur who was known to have supplied the labourers for mining work that was being carried out by the Christmas Islands Phosphate Co. Ltd.


If one were to take a closer look at the tombstone, we would noticed interesting carvings. These carvings have symbolic meanings. They often either refer to an auspicious symbol or they remind the descendants of values such as filial piety.

In this post, I shall attempt to identify and highlight some of the stories of filial piety that have been carved on the tombstones at Ong Sam Leong's tomb-site. Admittedly, I was not able to identify the stories behind each and every carvings as yet. It is hoped that through the sharing on this post, I could enhance people's awareness of and interests in Bukit Brown Cemetery. Happy discovering!

In the days when air-conditioners and heaters were not invented, filial children like Huang Xiang creatively thought of ways to help their parents to feel warm during the winter and to enjoy relief from the heat during the summer. I wonder if air-conditioners and heaters were invented by filial children who were inspired by Huang Xiang's filial piety?

**
Thanks to Elizabeth McKenzie's chapter on Bukit Brown Cemetery in the book titled Spaces of the Dead: A Case from the Living, I had an easy time to figure out what this section of the tombstone is intended to depict.


**
**
**
**
**
**
The protective instinct of this son, Wang Pu, amazes me. His mother dreaded the sound of thunder-claps. Even when his mother was no longer alive, he would run to her grave and try to protect his mother's spirits whenever there is a storm. Sometimes I wonder if the stories were exaggerated so as to aptly put across the value of filial piety?

**
**
The next time if you were to visit the tomb of Ong Sam Leong at Bukit Brown Cemetery, please take your time to appreciate the values that the tombstones were intended to depict. It seems that tombstones serve both decorative and functional (educational) purposes. 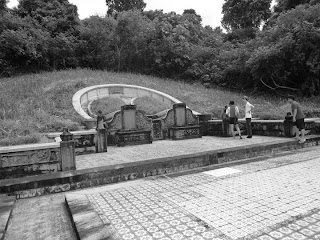 My simple wish is that the tomb of Ong Sam Leong and the Bukit Brown Cemetery could remain preserved for future generations to appreciate.

**
I came across the following related sites in my attempts to identify the stories of filial piety. Please make time to visit these sites:

Free Map for DIY Tours to Bukit Brown by Asia Paranormal Investigators
Bukit Brown: a place with a rich heritage and biodiversity
Notable People who are buried in Bukit Brown

The unkempt beauty of Coffee Hill by Jerome Lim
Bukit Brown Cemetery by Jeffrey and Flora
The Walk to Bukit Brown by Leone
Walking within the grounds of Bukit Brown! by Leone
Sculpture is an important form of public art! by Leone

Raymond Goh has put up a series of posts on the full set of 24 stories of filial piety found on the wall panels of Ong Sam Leong's tomb: