Bukit Brown: a place with a rich heritage and biodiversity 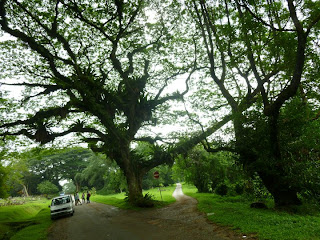 Life, has a mysterious way to show us what to pay attention to. If you have stumbled upon this blog-post, it may not be sheer coincidence. It could be life pointing you to pay attention to this place in Singapore that is called Bukit Brown.


I do not have a keen interest in cemeteries. However, life somehow paved the way for me to take a good notice at Bukit Brown, a unfamiliar place that strangely felt familiar to me. Bukit Brown is bordered by Thomson Road, the Pan Island Expressway, Mount Pleasant Road and Lornie Road. Lornie Road is a road that I used to travel frequently on and yet before 18 Jun 2011, I have never stepped into the Bukit Brown cemetery that Lornie Road borders. When I received my first invitation to visit Bukit Brown, my natural response was to accept it.


When I visit Bukit Brown on 18 Jun 2011 with a group of friends, I was pleasantly rejuvenated by the peaceful atmosphere and the lovely scenaries of Nature at Bukit Brown. What intrigued me further were the intricate stone carvings erected within the many grave-sites at Bukit Brown. As best as I have understood, according to feng shui, also known as Chinese Geomancy, these carved images enhance the auspicious aura of the site and protect the tombs.

Lions as protectors
Sculptures of lions can be seen at many of the grave-sites. They serve as protectors of the respective grave-site. Usually, the guardian lion sculptures come in pairs. The male lion (sculpture) will usually have a ball, representing the sun, under its paw. On the other hand, the female lion (sculpture) will be seen with a cub under her paw. The next time when you see lion sculptures, you may wish to take a closer look.


Indian guards representing security
Interestingly, we noticed that sculptures of uniformed Indian guards at a number of the grave-sites in Bukit Brown cemetery. Due to a number of historical and social reasons, Sikhs and Indian men from Northern India, were commonly recruited as law-enforcers and watchmen in early Singapore. A number of these Indian men were employed by wealthy individual as watchmen and bodyguards. 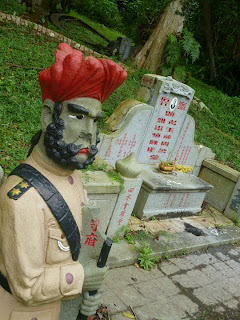 The magnificent tomb of Ong Sam Leong
The highlight of our visit to Bukit Brown was the double-tomb of Ong Sam Leong and his wife. Ong Sam Leong (1857 - 1918) was born in Singapore. In 1898, he made his fortune when he secured the contract to supply all the labour for mining work that was being carried out by the Christmas Islands Phosphate Co. Ltd.


The grave is said to be about the size of 10 three-room HDB flats and is the largest grave in Bukit Brown. Aside from being the largest grave, it is also one of the most elaborate graves around. The tombstones are beautifully decorated with intricately carved scenes depicting the Eight Immortals, stories of filial piety and more. The craftsmanship was excellent and could not be easily paralleled by today's craftsmen. Oddly, I felt I have learnt more about the Chinese culture by visiting a cemetery than by reading volumes of book.


What will be the fate of Bukit Brown?
The alarming news is that all the beautiful gifts bestowed by Nature and the refined works of art that I had seen during my visit to Bukit Brown may soon be gone. The Urban Redevelopment Authority (URA) has gazetted Bukit Brown Cemetery as a site for development ('Bukit Brown to make way for housing', Straits Times, 30 May 2011). 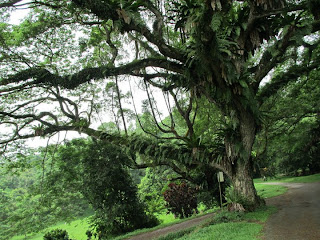 Thoughts and reflections
I would cringe to see beautiful works of art and of heritage significance being destroyed by bulldozers and machines. The craftsmen and artists who have created the graves with loving care had probably envisioned the graves to be built to last, for posterity to maintain vital links with their ancestors.


According to the Straits Times article "Tycoon's tomb uncovered" dated 4 Jun 2006, the then Public Monuments Board was said to be keeping watch on the Bukit Brown cemetery and will act if and when it is threatened by redevelopment.

One of my friends, Ms Belinda Tan, suggested that tombs with significance (e.g. the tomb of Ong Sam Leong and his wife) could either be preserved in situ, or at the very least, have their tombstones carefully preserved in the museums.

I would personally prefer the significant tombs to be preserved in situ as a living outdoor museum similar to Pompeii. In addition, I wonder if the rich biodiversity at Bukit Brown will make it a worthy location to be considered as a Nature Reserve? Are there possibilities for the National Parks, the National Heritage Board and the Urban Redevelopment Board to work hand-in-hand to redevelop Bukit Brown into a living outdoor museum located in a Nature Reserve? However, if this could not be done, the next option would be to work closely with the descendants of selected tombs so as to carefully preserve the tombstones in the museums (preferably under the National Heritage Board) for all to see.

Belinda has also made a good point when she commented that Singapore has our own rich heritage and artifacts in our own backyards. I would be most delighted to learn more about my own hometown not by viewing expensive exhibits from other parts of the world, but by having the open eyes to appreciate the rich value of existing artifacts and places of significance that are already available in my own country. What about you?


Whatever your opinions may be, here is an invitation for you to consider making a visit to Bukit Brown to experience this place that has a rich heritage and biodiversity. Of course, please be respectful of the living beings (e.g. the visitors, wildlife and birds) and the Dead throughout your visit. In addition, you may wish to bring mosquito repellent, wear light-coloured long pants and long sleeves clothes and wear covered shoes with soles the grip the ground well.

Acknowledgments
Lots of thanks to Ms Belinda Tan for organising a private walk about Bukit Brown. She has diligently compiled a list of links and resources related to Bukit Brown which had gotten me on a good footing when I did my readings on this subject matter.

Special thanks and appreciation to the most thoughtful Soap Drinker for leading our group to Ong Sam Leong's tomb. Many thanks to my group-mates for their company and great fellowship. One of them, a fine gentleman, provided the much needed shelter from the hot and humid climate with his air-conditioned vehicle. I think the children in our group appreciated having him around.

I recommend interested parties to read this book titled "Spaces of the Dead: A Case from the Living" edited by Kevin YL Tan. There are two chapters in this book that lend a good overview of Bukit Brown. It was thanks to these two chapters (written by Elizabeth McKenzie and Ho Hua Chew respectively) that I could have a better appreciation of the Chinese art, architecture and cultural symbols that I saw at Bukit Brown.


****
Related posts by other writers:
- The unkempt beauty of Coffee Hill by Jerome Lim.
- Bukit Brown Cemetery by Jeffrey and Flora: Living in Singapore

****
For your convenience, please find below a brief history of Bukit Brown and references used.

History of Bukit Brown
Bukit Brown was named after George Henry Brown. He was a shipowner, trader and broker who arrived in Singapore in the 1840s. Brown's place of residence was located at present-day Mount Pleasant Road, which was close to the present Bukit Brown site.


The area was later brought over by three wealthy Hokkien entrepreneurs, Ong Kew Ho, Ong Ewe Hai and Ong Chong Chew. They came from the same village of Bai Qiao in Xiamen, China. When the trio brought the site known as Bukit Brown in 1870s, they had intended to set up a self-sufficient village for the less well-to-do members of the Ong clan. However, the site was eventually used solely as a burial ground and its ownership was passed on to the Seh Ong Kongsi. In 1918-1919, the Municipal government acquired a section of the Seh Ong Cemetery to serve the need of the wider Chinese community for more public Chinese burial grounds.


The Bukit Brown Cemetery was closed for burial in 1973.

Great piece and observation. Keep on writing! Our children's children might not be able to see them for themselves. :(

I'm not one who like to visit cemeteries, so your sharing really helps :) Thank you!

Chinatown boy: Thank you for your encouraging words. I hope our children's children could get to enjoy the gifts of the untouched beauty of Bukit Brown.

Pinkie: Thank you for visiting, and I hope it gets you to see another side of precious Singapore.

There is a petition urging the Singapore government to rethink bulldozing Bukit Brown Cemetery. There's 300 signatures so far, so please help if you think the place is worth saving.
Thanks!
http://www.ipetitions.com/petition/bukitbrowncemetery/signatures

Hi Anonymous, thank you for sharing the link to the petition. I've supported the cause a week ago.

Hi, thanks for sharing the photos and for the write-up... any idea if there will be any more guided walks coming up? :)

Hi cKH, thank you for your interest in Bukit Brown. You may please check with API to find out if it will organise similar unguided tour about Bukit Brown. Email: events@api.sg

Great post, and thanks for linking to my blog too.

Hi it great works, many thanks to all of you.

I remembered at the old outram road
IOH and much earlier in the 1970 the place where on renewed the Retricted Malaysia and Singapore passports.

Don't know anyone has the information of these two graves.

Thank you to everyone that worked hard to keep the history of Bukit Brown.

I recalled that there two old graves
above a small high land above the old IOH and earlier where one renewed the Malaysia and Singapore passport at Outram Road. The site be seen from Chung Khew Bank Building near by.

Mactome: I don't have the answers to your question. Hopefully someone else can enlighten you on that.

Thanks for sharing the info! But would like to ask if U noe anyone conducting private tour for Bt. Brown? Myself n some frenz r interested to visit n learn more. Can help advice? Thanks.

Hi Chan Chen, you may wish to join the Heritage Singapore - Bukit Brown Cemetery facebook page, and post your query there: https://www.facebook.com/groups/bukitbrown/