A tour of Soon Thian Keing 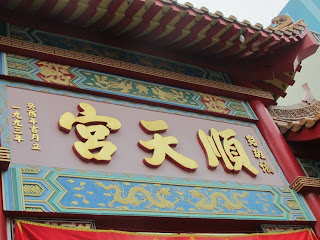 
Furthermore, I learnt that the founding of this temple can be traced to 1812 slightly earlier than the British founding of Singapore. This is a part of the history of Singapore that I have yet to come across in the history text and I was eager to find out more even though I know very limited about Chinese temples in Singapore, Chinese religions and about Soon Thian Keing itself 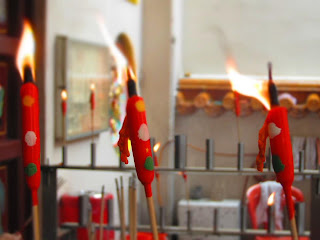 The tour was organised by Chinatownology. One of the personnel from the temple's management gave us visitors an overview of the history of the temple. I learnt that the name of the Chinese Hokkien temple, Soon Thian Keing, can be literally translated into "Obedience to Heaven". The temple currently sits at 19 Lorong 29 Geylang, Singapore 388070.

Since my ears did not seem to be very attentive that day, I shall not attempt to recall what I have learnt about  Soon Thian Keing in this post. Instead, I shall point interested readers to this webpage,
Chinatownology: Soon Thian Keing: http://www.chinatownology.com/Soon_Thian_Keing.html

In a nutshell, the inscriptions on the pair of stone tablets that was discovered in Soon Thian Keing in 1981 suggested that the temple was founded as early as 1812, even before Sir Stamford Raffles founded Singapore! Thankfully the temple's management has managed to preserve the tablets.


During the tour, I was intrigued by how the seemingly simple tablets could tell a whole lot of history and allow the visitors to trace the history of the temple. The tablets reminded me to appreciate and treasure the material culture around me.

The tour has also piqued my curiosity on the exact location of Malabar Street. I was then reminded of the tour, Hainan Kopi Tales, that I had went for a few years ago. During that tour, it was the first time that I was made aware of a street named Malabar Street. According to Singapore Infopedia, Malabar Street connects Middle Road and Malay Street. I think I would need to search for a map of Singapore perhaps as early as the 1880s.


Soon Thian Keing had to relocate from its original location at 73 Malabar Street because in 1984, it was informed that it "stood in the path of Singapore's future SMRT transport system". Subsequently, it was temporarily relocated at 173 Albert Street before it moved to its present site at 19 Lorong 29 Geylang. During the tour, we heard a bit about the resettlement process of the temple from its original location to its current location. 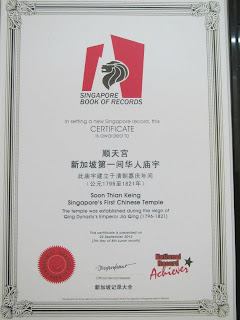 At the temple, I felt a sense of good vibes and peace. My eyes noticed a certificate that was framed and put up on the walls. The certificate read: "Soon Thian Keing, Singapore's First Chinese Temple. The temple was established during the reign of Qing Dynasty's Emperor Jia Qing (1796 - 1821)". This certificate was presented by the Singapore Book of Records to the temple on 22 September 2012 (7th day of the 8th lunar month). It looks like the certificate could be an endorsement that Soon Thian Kieng is the first Chinese temple in Singapore. 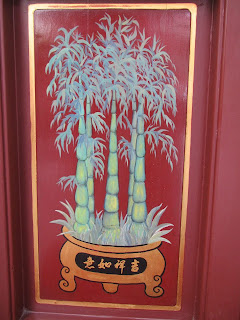 I still do not know much about this temple. Yet visiting it marks the first step to become more aware of a part of the history of Singapore. I thank Mr Victor Yue for the invite, the temple's management for its hospitality, and Chan for guiding the tour.