A morning at Bukit Brown


There was no air-conditioning. There was no proper toilet. Yet, I felt blessed with the great riches that Nature has to offer when I spend a morning at the Bukit Brown Cemetery.

I was treated to fresh air that refreshed my body, the lovely chirping of the birds, the gentle rustling of the leaves, the vast area of greenery relatively untouched by development (a rare sight in Singapore), and wonderful company in fellow heritage and/or nature lovers who have decided to spend a morning at Bukit Brown cemetery, possibly regarded by many to be worthy of being considered a Heritage Park.


It was the morning of 22 Dec 2012, soaked in the wealth of the material culture at Bukit Brown, I was simply fascinated by the rich amount of heritage that is hidden in this place only waiting to be rediscovered. That morning, I was also rewarded with sightings of horses having their leisure morning strolls at Bukit Brown.

During my visit, I saw woodpeckers and heard the sounds of some interesting birds. I think it is way better to spend time out in Nature than in the shopping malls. Hopefully some of the mall owners themselves will agree with me as well.


Led by the passionate volunteer guides, myself and other participants explored various parts of the cemetery. One of the tombs that we visited was the double tombs of Tok Cheng Tuan and Oon Tuan Cheng. This tomb caught my eyes with the presence of large benches and an extraordinary large size portraits at the tomb-site. We learnt that Tok and his wife's remains are to be exhumed for a proposed highway. I wonder what could be done to save this lovely double tombs?

Another tomb that we had visited was that of Tay Koh Yat. I had first visited this tomb in June 2011 with a group of friends with Mr Raymond Goh explaining to us about this respectable man who was admired for his patriotism. He had formed and led a self-defence force before the Japanese invasion. Somehow, as I stood before Tay Koh Yat's tomb, I felt a strange sense of deja vu as the volunteer guides gave their account of this respectable man. 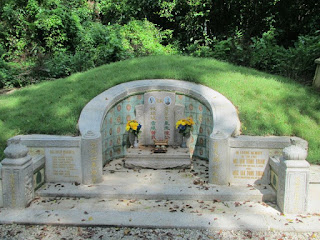 We also visited the tombs of Mr and Mrs Tan Yong Thian. It was one of the tombs that my friends and I had visited too back in June 2011. This site has remained very well-maintained by its descendants. Yet much has changed at Bukit Brown and I was feeling anxious that the date of the construction of the proposed highway would be drawing near.

Is building a highway through a century-old heritage cemetery (and near the water-catchment area) the only and long-term solution to ease peak-hour traffic congestion at the area? Furthermore, during non-peak-hours, travelling along Lornie Road is relatively quite a breeze. I have only more questions as I start asking myself.


Anyway, one of the interesting tombs that we saw during our tour was a tomb with Dutch inscriptions. This was the tomb of Tan Tang Hoaj who probably have business or trade dealings with the Dutch. This tomb was one of the tombs with a stake, marking that it will be affected by the construction of the proposed highway. 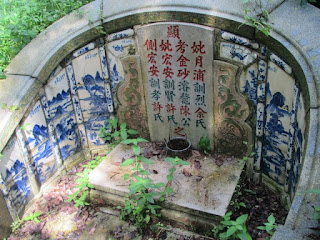 It was rare nowadays to see a Teochew tomb decorated with porcelain. This tomb is the resting place of Tan Swee Kee who was one of the founders and directors of Sze Hai Tong Bank. The porcelain somehow added a poetic touch to the tomb.

The tomb that had left an impression on me was that of Lee Kim Soo who had shared a similar date of birth as yours truly only that he was born in a different year. Lee Kim Soo became rich from manufacturing matches. 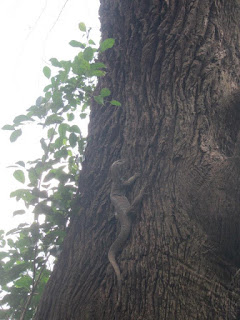 When the tour officially ended, on our way to the roundabout, we saw a large monitor lizard camouflaging itself against the textured trunk of a tree. Where would it move to if the construction of the proposed highway were to take place? 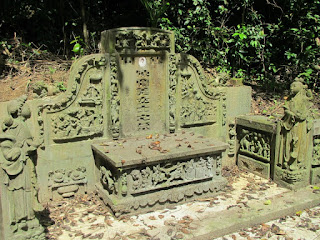 All I had wanted was a morning close to Nature and heritage. I had reaped way more than I had imagined that very morning. I have learnt personal histories than spanned across decades. Many thanks to the volunteer guides for their wonderful work in raising the public's awareness of Bukit Brown cemetery.