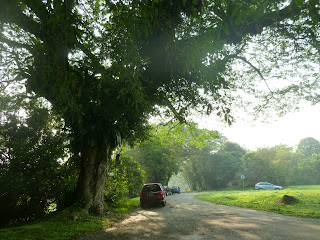 It was a Saturday morning. There were numerous ways I could choose to spend it. My choice for 23 Mar 2013 was to wake up early in the morning, put on my pair of sports shoes and make my way to Bukit Brown. I was there for the special themed tour which would focus on the beautiful tombs of Bukit Brown.

Admittedly, I did not like the thought of having to perspire under a hot sun. Yet, thanks to the canopy of the trees in the area, shade was generously provided during much of the tour. Once the tour started, I was feeling very thankful that the weather was relatively good enough for a learning adventure. We would be on an adventure to learn about the stories embedded in the ornate tomb panels.

The walk about Bukit Brown
Our first destination was the tomb of Ong Sam Leong. I thought it was a very wise decision to make this tomb the first stop before the sun got brighter. Along the way, the tour guides highlighted and expressed appreciation to the Cub Scouts of America who had cleaned a number of the tombs last weekend.

Along the way to the tomb of Ong Sam Leong, the group saw a few horses who were having their walks about Bukit Brown. I wondered where these horses would have to go for their walks if the construction of the new dual four-lane road across Bukit Brown begins soon after this year's Qing Ming Festival. Perhaps that was why one of the horses seemed to be treasuring every single moment that it could look at the greenery in the Bukit Brown area? 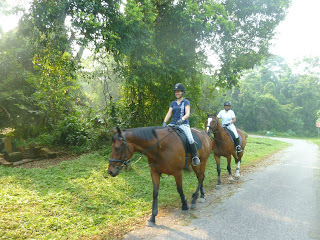 The birds and the squirrels have seemed to make Bukit Brown their haven and heaven. The birds seemed to be enjoying their games of flight about the forested area of Bukit Brown while the squirrels looked as if they were safe in their hideouts. The 20 minutes slow trek to Ong Sam Leong's tomb proved to be a treat to both my eyes and ears as I took time to see the beautiful creation of Nature and to listen to the sounds from the birds and the rustling of the leaves. Do the animals know the eventual fate of Bukit Brown? Maybe they had by their sheer nature, trusted us human beings to look out for them? 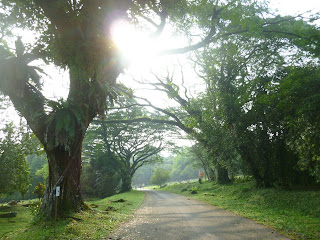 
Our volunteer guides took turns to share with about the Earth Deity (Fu Shen) and the related deisgns. The Earth Deity's role is to protect the tomb. Interestingly, the area that was set aside for the Earth Deity at Ong Sam Leong's tomb was considerably big. The guides shared with us the auspicious meanings behind the ornate decorations found on the altar of the Earth deity.

- The five bats represented the five happiness（五福）. These are said to be longevity（长寿）, wealth（富贵）, health（康宁）, virtue（好德）, and a good death（善终）.
- The peony in the vase represented wealth and peace respectively.
- The incense burner represented the offspring.


To satisfy the curiosity of the tour participants, the guides also shared the story that was being depicted on the front panel of the altar of the Earth Deity for Ong Sam Leong's tomb. It was the story of Zhao Yan pleading for Longevity. The underlying message seemed to be telling us that filial piety is a virtue that will be rewarded.

A couple of steps away, the tomb panels of Ong Sam Leong's tomb depict the full set of the 24 stories of filial piety. One of the guide shared with us the story of Wang Pu crying by the grave when thunder rolled and so forth. It seemed that Ong Sam Leong's tomb has important moral messages to communicate to its descendants.

More about tomb panels and tomb designs
After visiting Ong Sam Leong's tomb, the group visited a few other tombs. At the tomb of Oh Sian Guan and his wife, we learnt from the guide that the one of the tomb panels depict stories from The Romance of the Three Kingdoms.

At another tomb, I learnt from the guide that the pumpkin-shaped tomb structures represent the concept of "many seeds" which is synonymous with having many offspring.

During our visit, we also learnt that what are commonly known in Singapore as the Peranakan tiles are actually known as the Majolica tiles in other parts of the world. To produce these tiles, glaze containing lead would be used. I learnt that the productions of such tiles have stopped by 1935. These tiles are pretty fascinating to look at.


By the end of the tour, I felt that I have learnt a little more about the meanings behind some of the tomb designs in Bukit Brown. I am thankful that I have had the opportunity to visit Bukit Brown while it is relatively intact and untouched by development. It is not only the habitat of many species of wildlife, it is the place where learning about our local history and heritage could come physically alive as we see what are on the tombs and experience Bukit Brown. 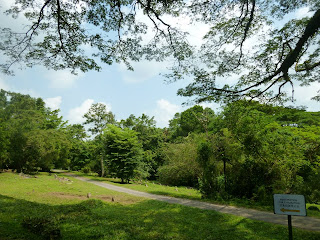 Many thanks to the guides and the "Brownies" who have volunteered their time and have put in their effort to raise the awareness of Bukit Brown.

Reflections
Soon, it will be the last Qing Ming for the almost 4000 tombs that will be affected by the dual four-lane highway. I wondered if it was absolutely necessary to construct a highway across Bukit Brown at this point in time?

How long would it take for the trees in the affected Bukit Brown forested area to grow to their existing height if they were destroyed? Will anyone in the world today have the craftsmanship and technology to replicate a cemetery that is as unique as Bukit Brown?

A hundred years in the future, what will my descendants have to say and feel if they learnt that a highway that only takes a few years to build was to totally alter the landscape of an almost century-old cemetery that was planned by man and subsequently nurtured by Nature? 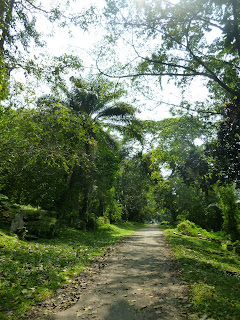