Dawson and Alexandra Guided Tour: Experience the transformations of the Queenstown Community 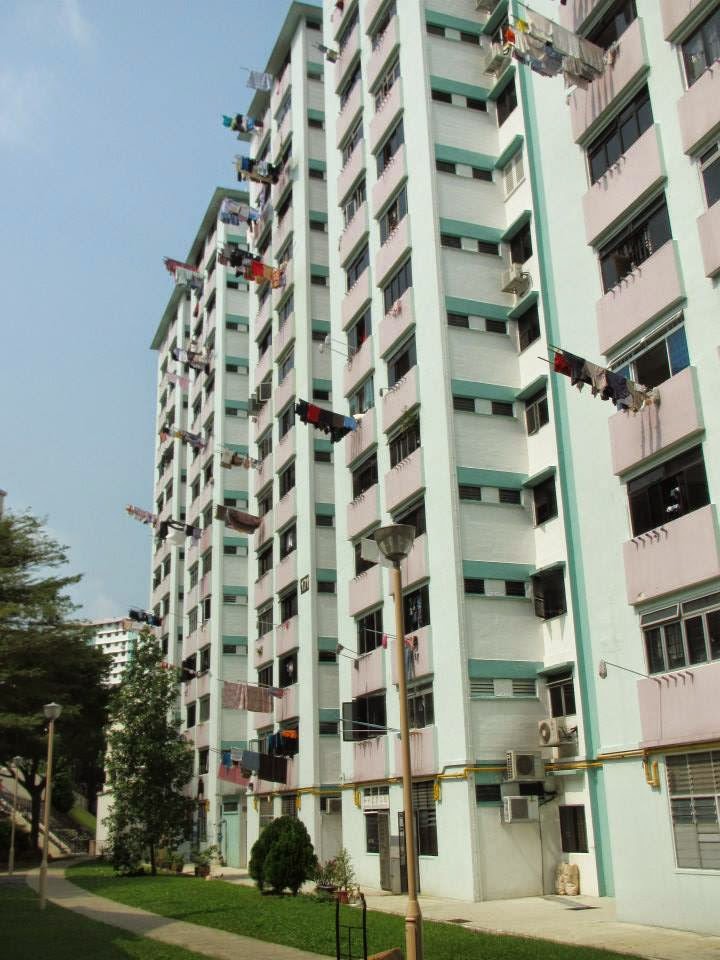 Queenstown has the distinction of being the first satellite estate in Singapore. However, I did not grow up in Queenstown and so I have limited memories of such a historically significant place in Singapore. I am often curious what makes Queenstown such a special place in the hearts of many others.


A new heritage trail!
When I received an invitation from My Community, The Other Sites of Singapore (TOSS) and Queenstown CCC to attend a media preview of Dawson and Alexandra Heritage Trail, I gladly took up the invitation despite a tight schedule.

I perceived the heritage trail to be an avenue for me to learn more about Queenstown, a place in Singapore that I was unfamiliar with. I have had a positive experience when I attended another My Queenstown Heritage Trail, the Duchess and Tanglin Hal Guided Tour, in July 2014, so I felt confident that the Dawson and Alexandra Heritage Trail will turn out to be positive too. My gut feelings proved to be accurate. 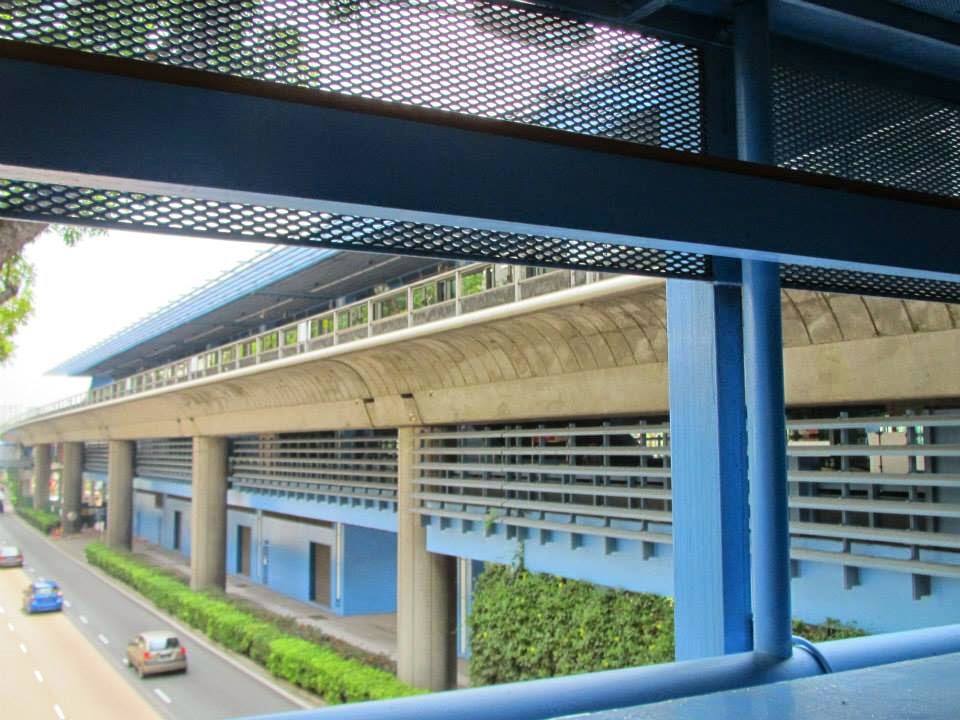 My Queenstown Heritage Trail
The start of the tour held on 4 April 2015 was at the Queenstown MRT station. Each of the participants were issued a copy of latest reprint of the booklet titled My Queenstown Heritage Trail (published by My Community in Feb 2015) and were handed a gadget called Vox Radioguide. The Vox Radioguide enabled participants to listen to the tour guide's commentaries via earpieces even when he was a distance away.

I learnt that the Dawson and Alexandra Guided Tour will be conducted on the last Saturday of the month, from 9.00 a.m. to 11.30 a.m. with the meeting point being the Queenstown MRT station. The excitement to be one of the first participants on this new heritage trail proved to be motivating enough to sustain me to walk on foot for more than two hours. 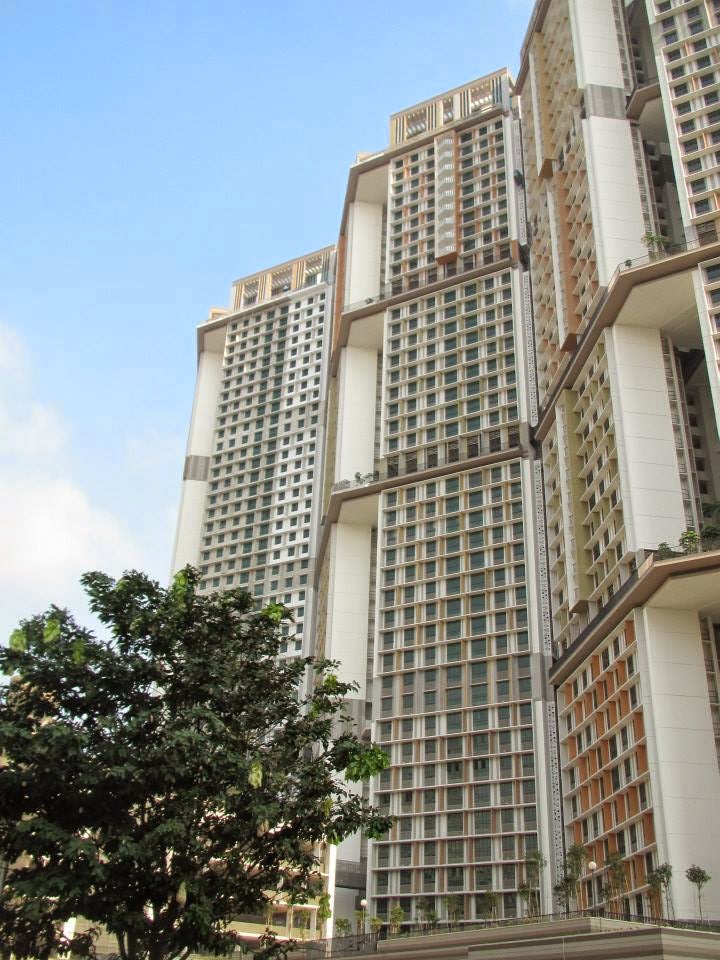 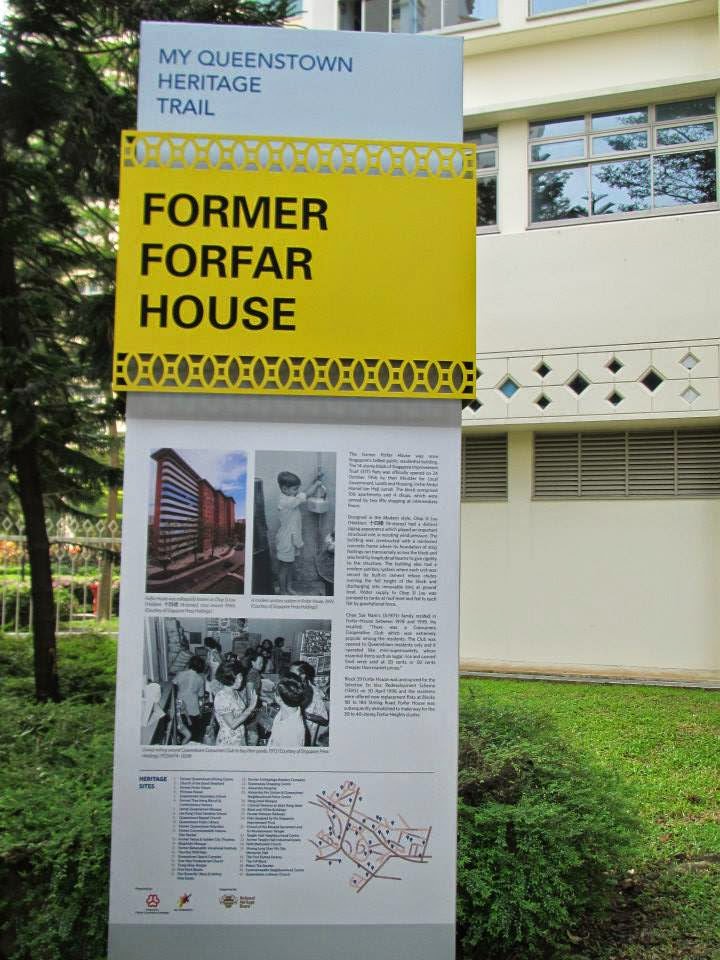 From its colloquial name, I would infer that the height of the former Forfar House did impress many of its residents back in 1956. It would have been rare to see a 14-storey flat back in those days? The former Forfar House had modern sanitary system. It was subsequently demolished in 1996 to make way for the 30 to 40-storey Forfar Heights cluster. 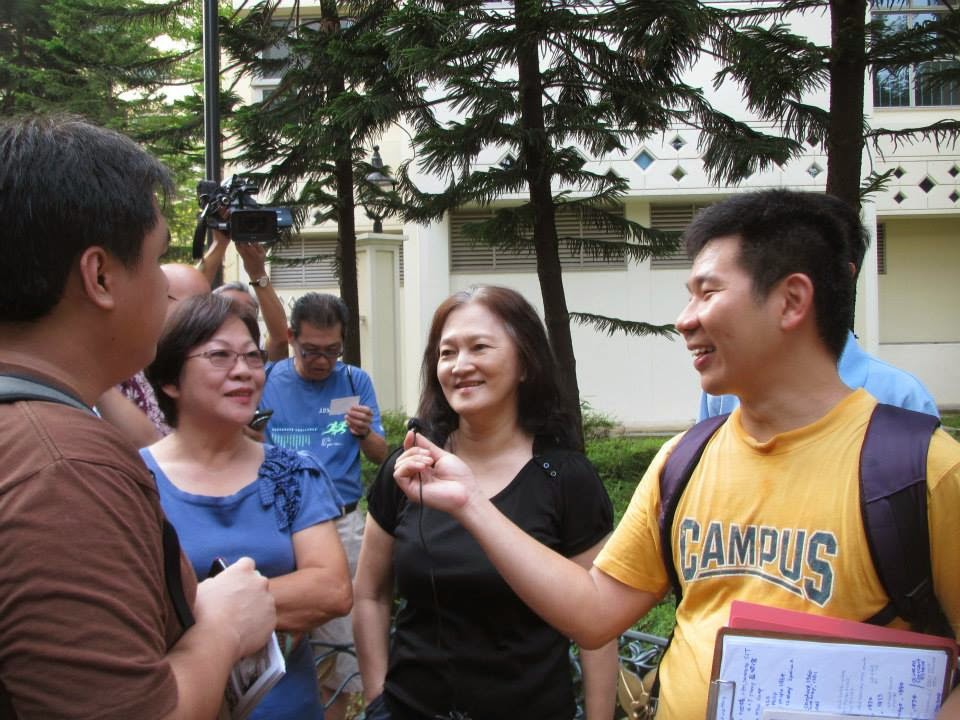 During the tour, we had the privilege to listen to accounts given by residents who have been living in the area for years. I vaguely heard that it was typical of the low-rise buildings in Princess Estate to be fitted with blue glass windows. I wondered how they had looked like? A quick glance at the windows of the flats of the current Forfar Heights cluster could lend an impression. To gain deeper insights, we were referred to read Dr Tan Kok Yang's book, From the Blue Windows. 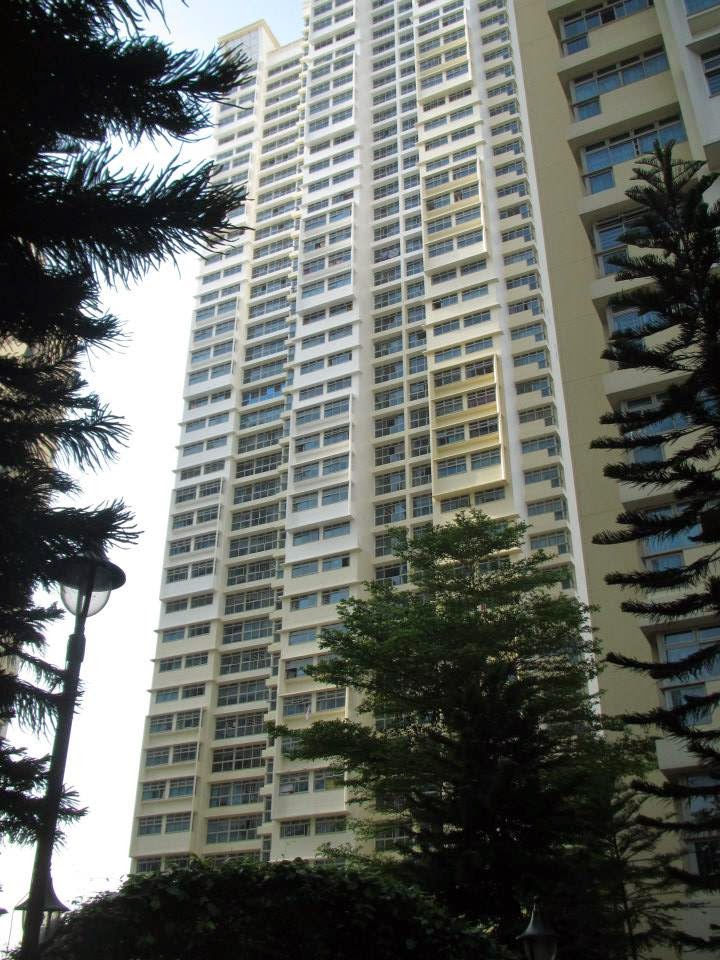 Princess House
One of our stops during the tour was the seven-storey Princess House. I was attracted to the simplicity of its architectural design. It looked beautifully functional from a distance, doesn't it? I learnt that it was previously used as the new office for the then Singapore Improvement Trust (SIT). Subsequently, it became the first dedicated headquarters for the Housing and Development Board (HDB). In 1972, the Ministry of Environment took over the premise and an adjacent four-storey complex.

Remnants of its military past?
As mentioned much earlier, there used to be a military camp where the Queenstown now stands. The heritage trail brought us participants to a place that was accessible via Kay Siang Road, near the previous location of the former Hua Yi Boys Chinese Middle School. After walking along narrow and steep footpaths, we saw what looked like bunkers. What had these structures been used for? Our tour guide shared with us that research has began so as to learn more about these remnants of the area's military past.


We were advised not to visit these bunkers on our own without a guide, unless we have received proper commando training. I felt thankful that the organizers of the heritage trail have put in painstaking efforts to ensure the safety of its participants. 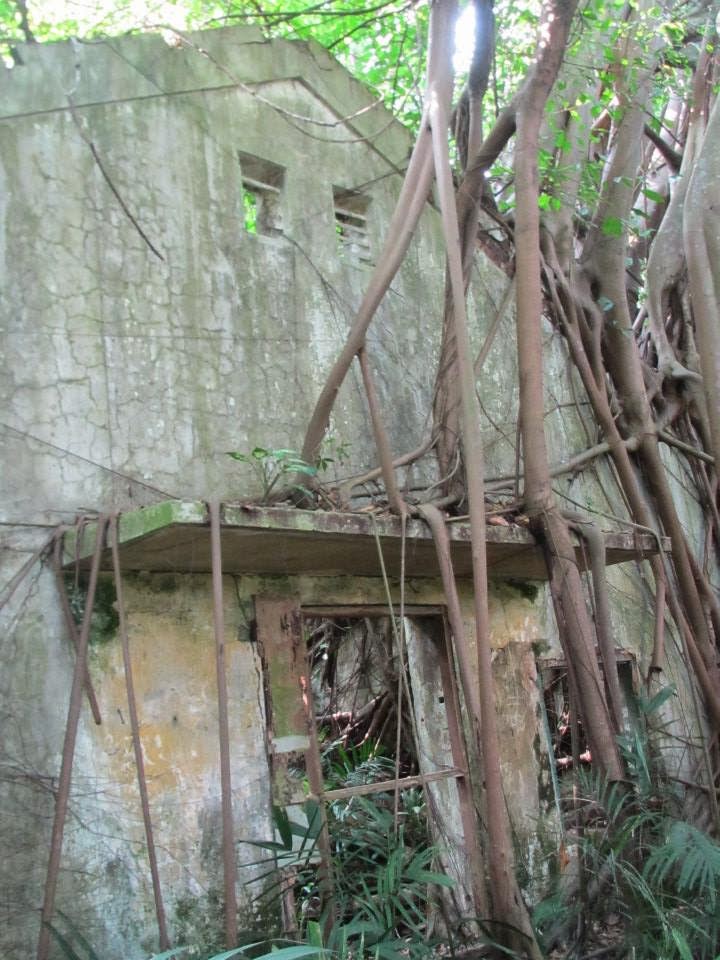 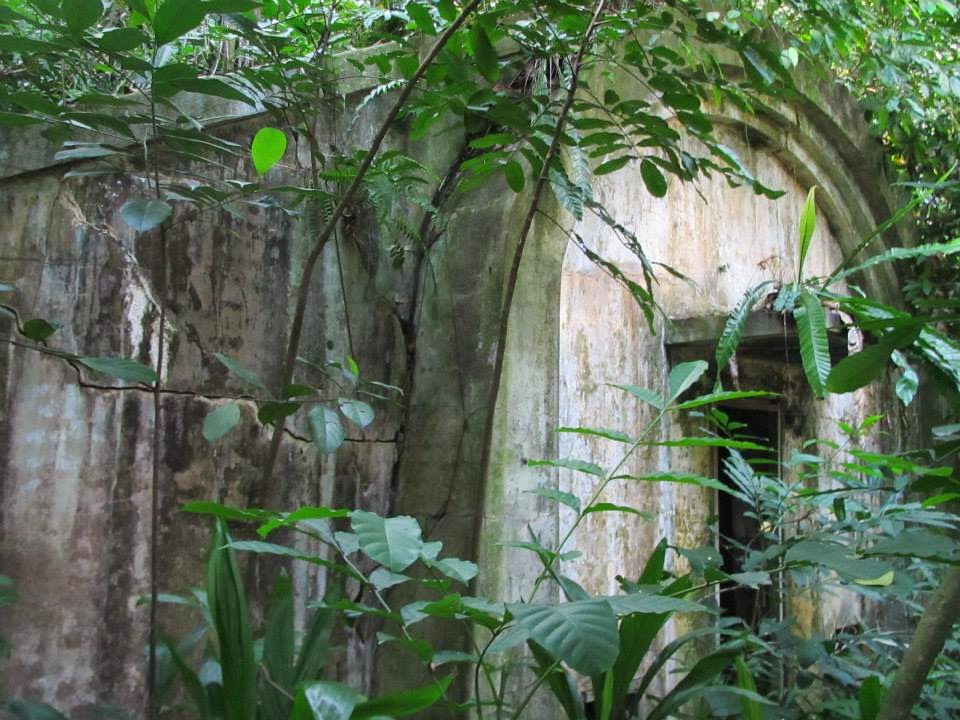 Tiong Ghee Temple
The visit to Tiong Ghee Temple caught my interes because I was curious to learn about Boh Beh Village which is loosely translated as "no tail river (stream)". The current Tiong Ghee Temple was built in 1973 to replace the previous old village temple at Boh Beh Kang that was demolished in 1968 for the development of Mei Ling estate. 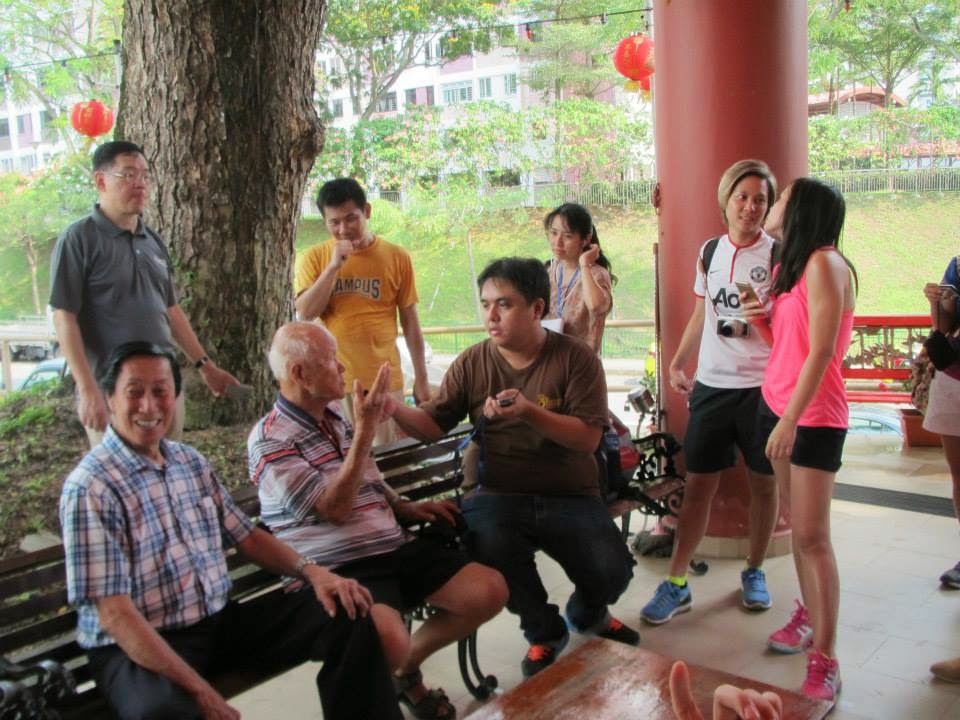 Many thanks to the organizers, tour participants learnt from two gentlemen about the temple's past and about Boh Beh Kang. Indeed, this temple serves as a reminder of Queenstown's past.

The Butterfly Block
By the time that the trail brought us to Block 168A Queensway which is commonly referred to as the Butterfly Block, I was admittedly feeling slightly overwhelmed by the rich history of Queenstown area that the tour was filling me in with. It was a wonderful problem because that was precisely what I had signed myself up for!

We learnt from one of its first residents, Mr Paul Fernandez (b. 1940), that the Butterfly Block was designed to look like a a butterfly that is flying around. The Butterfly Block has interesting curves for its facade. Yet, if you were to ask me, I prefer the simplicity in design of the Princess House instead.

Mr Fernandez and his family moved into Block 168A Queensway in 1975. He revealed that in those days "finding accommodation was like finding a needle in the haystack". His words reminded me to appreciate even more deeply the fact that I was one of the beneficiaries of Singapore's public housing policies. The policies and the good implementations enabled my parents to secure affordable housing so that my family's needs for accommodation have been effectively met after my birth. 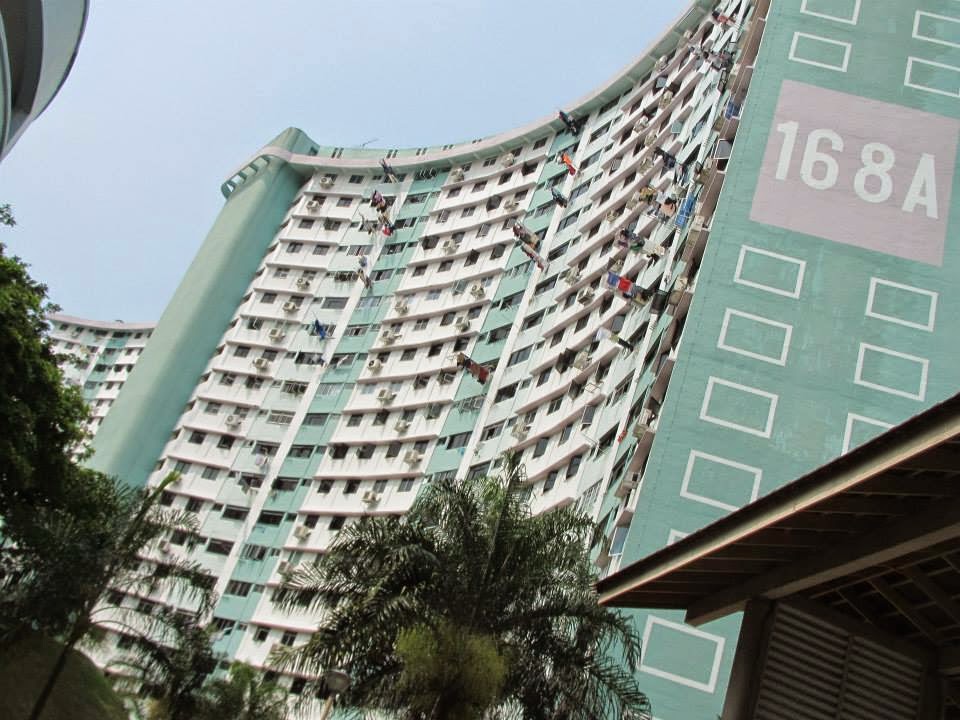 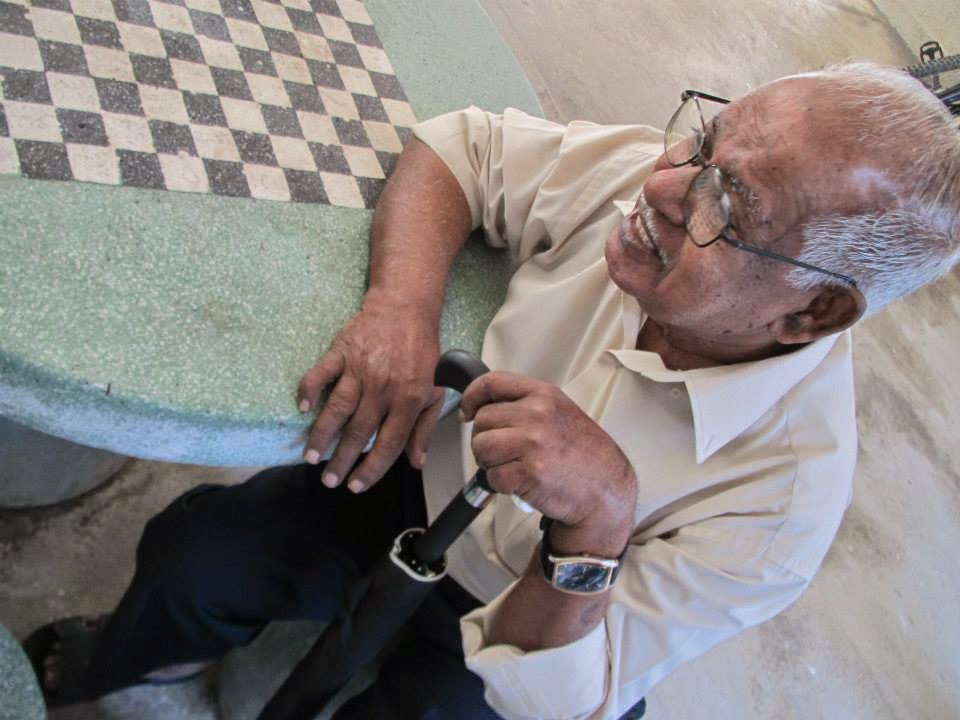 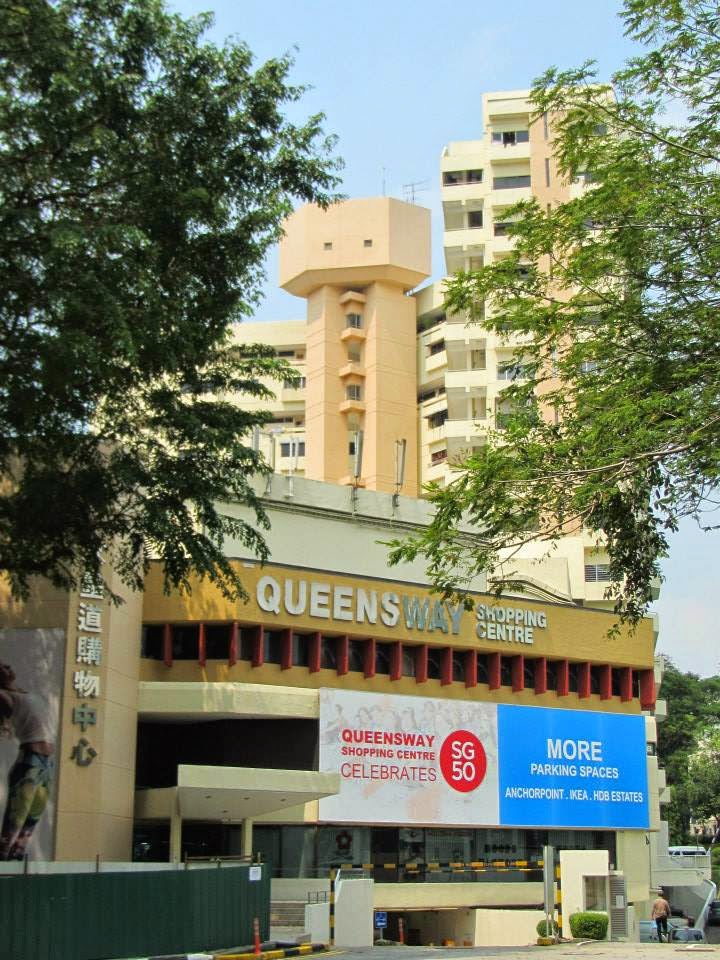 Our trail also introduced us to the former Archipelago Brewery Company that used to be located along Alexandra Road, the Alexandra Fire Station, the Hong Yin Hill and the Hong Lim Hill. 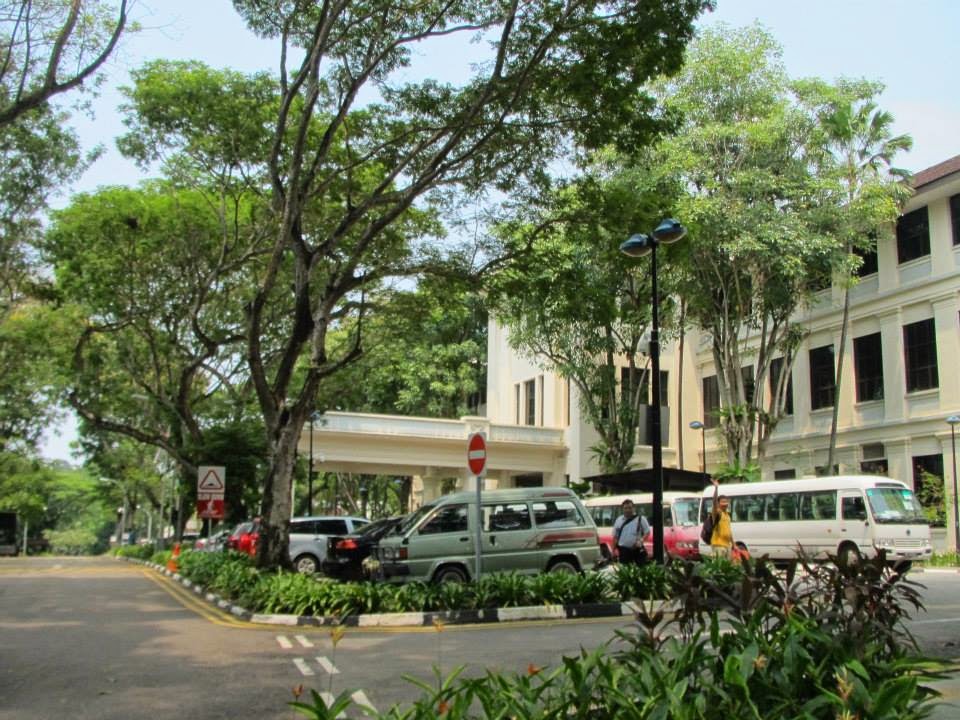 Opened in 1940, the Alexandra Hospital was formerly the British Military Hospital. It was the hospital with the most-advanced facilities in Singapore and Malaya when it was opened.  It had served as the principal hospital for Britain's Far East Command during World War II until the Japanese occupation. 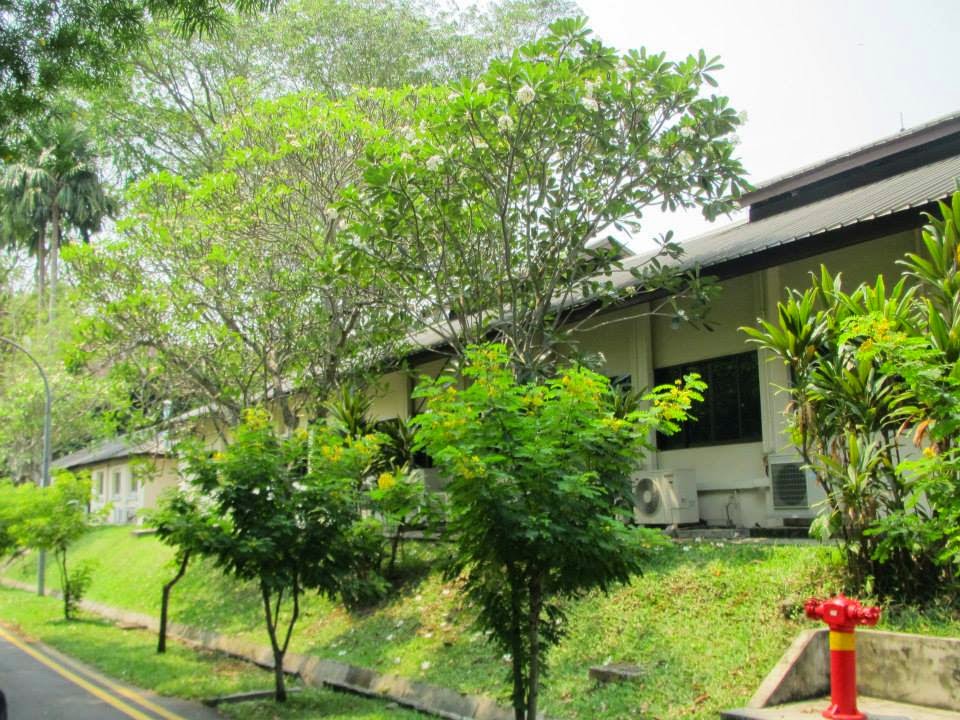 While we were at the Alexandra Hospital, we have had the privilege to take many glances of the entrances to the tunnels at the hospitals. Our tour guide shared with us that from Aug 2015, future participants of the Dawson and Alexandra Guided Tour are likely to have the opportunity to walk into these tunnels. 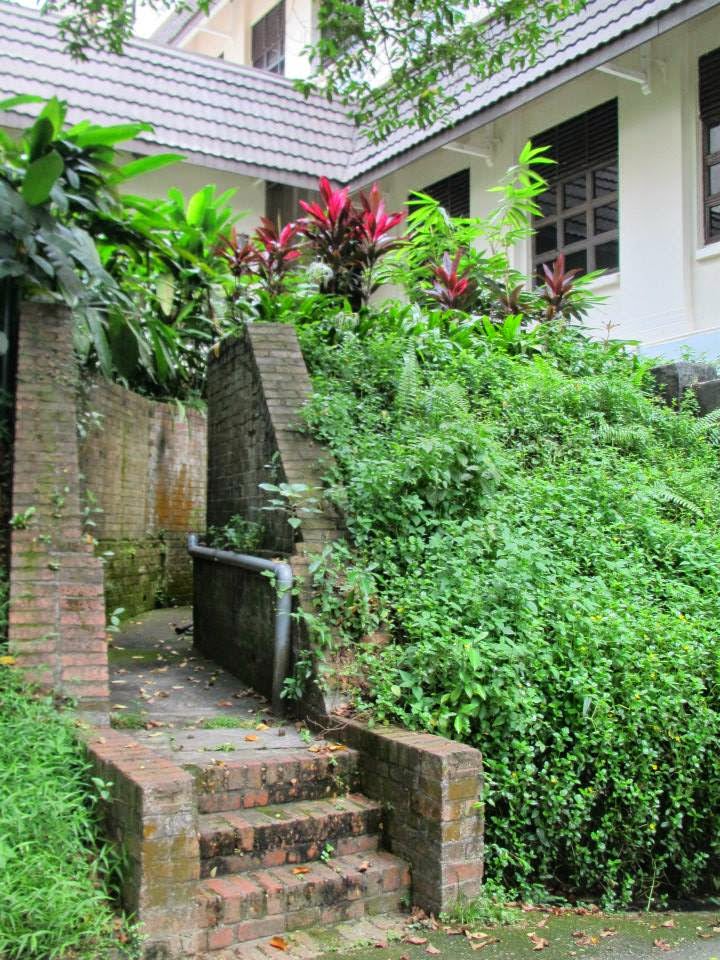 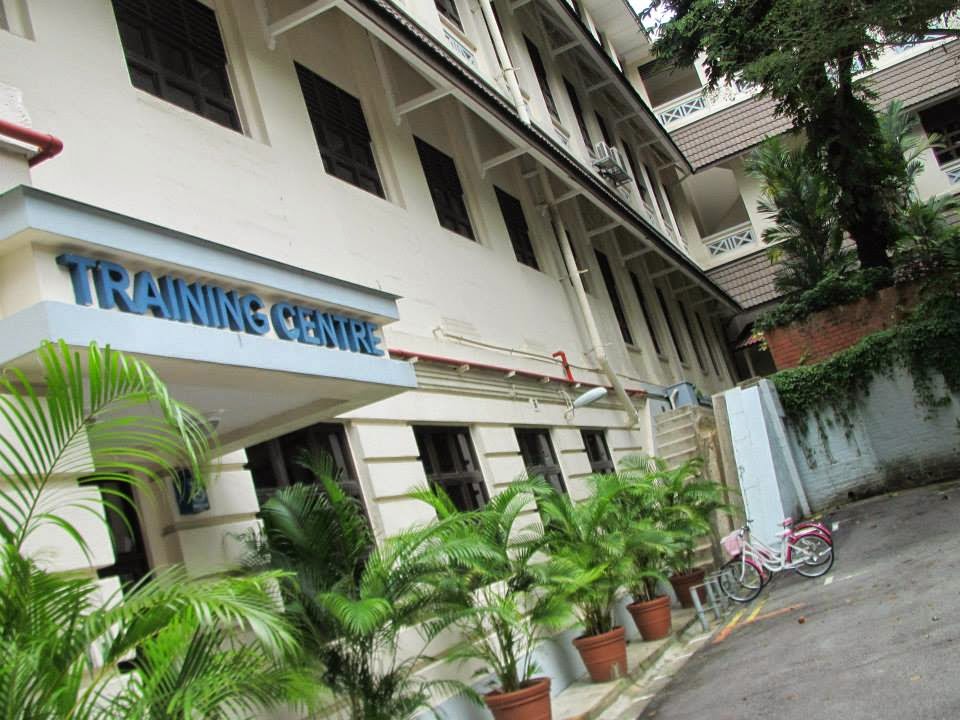 We also learnt during the heritage trail that the empty field in the direction behind the Alexandra Fire Station was the site of the British army's Normanton oil depot. In a vain attempt to stop the advancement of the Japanese soldiers back in Feb 1942, the oil silos of the oil depot was set on fire. Unfortunately, the fire had also engulfed the nearby villages and the retreat of the defending Malay Regiment.

After WWII, the Singapore Improvement Trust (SIT) acquired the land which the Normanton oil depot had sat on from the War Department to build the Queenstown's Neighbourhood V. The neighbourhood was demolished in 1988 and is now an empty field. 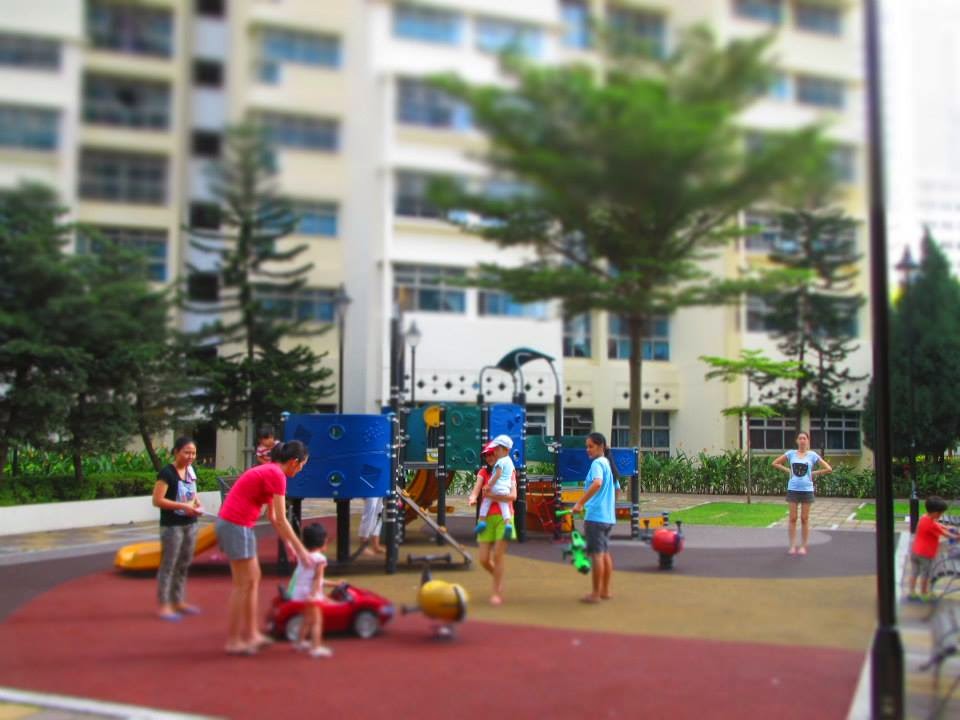 The transformations of Queenstown
I marvelled at the significant transformations that Queenstown area has went through. It used to be an agricultural area with people living in attap huts before the war in 1942. Today, it is one of the most popular housing estates to live in. The public housing in Queenstown are equipped with modern sanitary facilities. The flats provided accommodation and comfort to the residents of Queenstown. 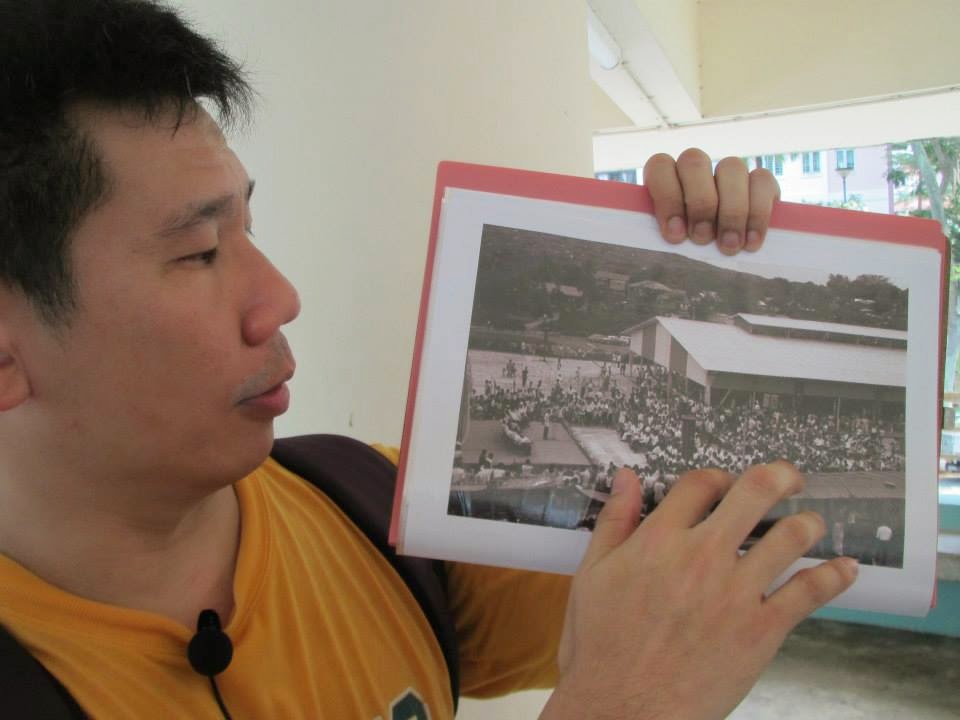 In my humble opinion, the Duchess and Tanglin Halt guided tour highlights the charms and the important milestones that are found in Queenstown whereas this Dawson and Alexandra Guided Tour focuses on Queenstown's military history, the accounts by the residents and more importantly, the transformations of Queenstown over the span of about five decades.

This is a tour that I felt thankful to attend. It lent me to more insights of the Queenstown estate. Many thanks to the organizers and the volunteer tour guides for making this heritage trail possible. 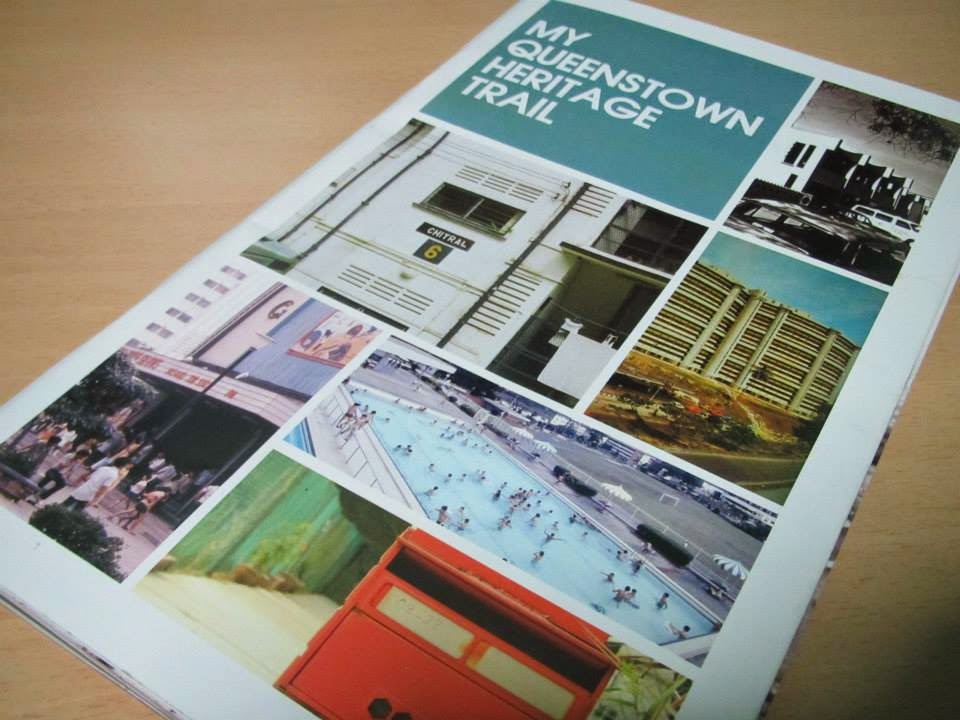 Tips for participants of the guided tour

Please register for the guided tour at:
http://www.myqueenstown.eventbrite.sg
myqueenstown@gmail.com
or call Queenstown Community Centre at Tel: 64741681.

As of 4 Apr 2015, I was told that all 900 tickets for the upcoming monthly My Queenstown Heritage Trails in 2015 were sold out! The next available tour is in year 2016. May patience be well-rewarded.

Participants who are unable to sign up for the trails are asked to email myqueenstown@gmail.com with your name, contact number, three preferred dates and the number of tickets. This is to request to be put on waiting list.

You may also like to refer to:
Good Morning Yesterday, Lam Chun See's Queenstown related blog-posts
Boh Beh Kang - River without an end, by Thmbuktu, Blog to Express
My Queenstown Heritage Trail: The charms of the Queenstown Community, by yours truly.
The History and Biology of Kent Ridge Park, by H.T.W. Tan, T. Morgany and Tan Kai-Xin.