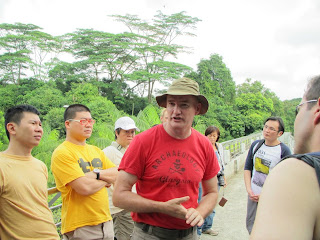 Life often presents us with many choices to make. One day when I was browsing a.t. Bukit Brown, I came across a special Battlefield Tour at "Cemetery Hill" led by battlefield archaeologist, Jon Cooper. Bukit Brown Cemetery was known as "Cemetery Hill" 70 years ago. The tour was scheduled to start at 10 a.m. on 17 Jun 2012 (Sun). Being intrigued to learn more about the fall of Singapore, the tour immediately caught my interest.

Then, I had a dilemma. I had agreed to meet one of my friends for a cycling trip at Pulau Ubin that very same day. Yet there was no way I can split myself up to be physically at two places at any one time. So I was feeling very grateful when the friend of mine agreed to my counter-proposal to go for the Battlefield Tour at Cemetery Hill instead. This proved to be a perfect choice for the day.

Battlefield archaeologist, Jon Cooper kept the participants intrigued with his passionate rendition and sharing of a rather unheard part of Singapore's history. Jon Cooper started the tour with a self-introduction of himself which gave all of us an idea how he ended up in Singapore when his hometown is in Scotland. I learnt that a few years ago, Jon Cooper came across a heritage marker along Adam Road, and that spun off the Adam Park Project. The project explores the defence of the Adam Park Estate by the 1st Battalion of the Cambridgeshires Regiment from the 12th to 15th Feb 1942 and a lot more. 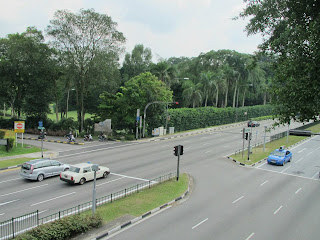 Our guide, Jon Cooper, shared fascinating stories of the battle that was fought on the few days before the fall of Singapore in 1942. The tour led us to Sime Road, to a spot which used to be part of the Royal Singapore Golf Club, to a forested area near MacRitchie Reservoir and finally to what was known as Cemetery Hill. During the tour, Jon Cooper also retraced the advance of the Japanese tank unit and the retreat of the British soldiers. The exciting part was having to find our way through the bushes to locate what were likely to be defensive positions used during the battle.

I was left with an impression was that it was quite a fierce battle that was fought seventy years ago. It was definitely not easy to fight a battle in a cemetery since it was not a terrain that most infantry soldiers would be familiar with.

During the tour, co-guide, Claire, shared with tour participants interesting features of Oon Chim Neo's grave in Seh Ong Cemetery, which is believed to be the largest single tomb in the area. I learnt about the interesting geomancy (fengshui) elements such as the dragon claws, tiger paws and more! 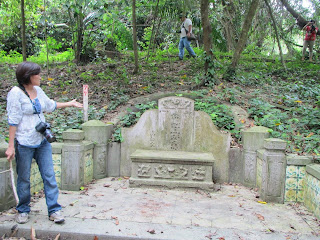 Jon Cooper's sharing of how the British soldiers would have tried to build defensive positions when they were fighting the battle within the compounds of the cemetery led me to infer that the soldiers were likely to be very determined to fight till the very end. It would not be an easy battle to fight in a very unfamiliar terrain and a certain level of determination and courage would be necessary.


From the Battlefield Tour at Cemetery Hill, I have learnt a lot about a part of Singapore's history that was new to me. It was a perfect choice to spend a Sunday morning learning about history and be away from the life in the city.

Many thanks to Jon Cooper for the invaluable work that he has done to unearth a glimpse Singapore's wartime history with the rest of The Adam Park Project team. Hopefully there would be resources for further research and survey work to be carried out.

Now, here is a piece of good news for the people who have missed the 17 Jun 2012 Battlefield Tour of Cemetery Hill: Due to overwhelming demand, there will be a repeat tour in July! Please watch this website for more details: http://bukitbrown.com