The special after-hours Curator Tour with Stella Kon, at the Peranakan Museum 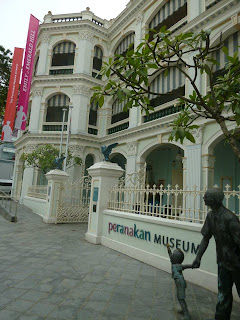 Before sunset, on the evening of 28 Jun 2012, instead of heading home, I found myself walking leisurely to the Peranakan Museum to treat myself to a special after-hours Curator Tour led by one of the curators, Jackie Yoong, and the playwright, Stella Kon.


What had enticed me was definitely not the promise of a treat to delightful light refreshments generously sponsored by Bengawan Solo and Gryphon Tea Company, it was the unique opportunity to learn first-hand from the curator (Jackie Yoong) and the playwright, Stella Kon, about how the exhibition, "Emily of Emerald Hill": Singapore Identity on Stage, was conceived and to gain deeper insights into Stella Kon's inspirations for writing the one-woman play "Emily of Emerald Hill". 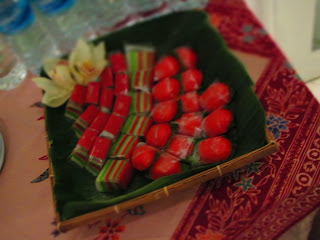 "Emily of Emerald Hill" was written by local playwright, Stella Kon, in 1982. This one-woman play tells the story of a Peranakan woman, Emily Gan, as she evolves from a young bride to a typically strong matriarch in the Peranakan enclave of Emerald Hill in Singapore. 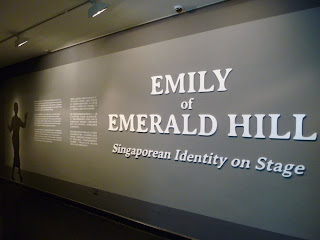 During the tour, I realized that most of the tour participants had either watched or read "Emily of Emerald Hill". Yours truly was one of the few participants who have yet to watch or read the play "Emily of Emerald Hill". What had got me interested to attend the Curator Tour was a recent visit to the exhibition, "Emily of Emerald Hill": Singapore Identity on Stage a few weeks ago. It was during that visit that my curiosity in this landmark Singapore play and its relevance to contemporary Singapore culture was aroused. I was drawn to sarong kebaya of Mrs Seow Poh Leng as well as the early 20th century wood and glass cupboard which used to adorn the sitting room of Oberon, a grand old house on Emerald Hill that Stella Kon grew up in.


Even more intriguing for me was when I learnt from the exhibition that the play, "Emily of Emerald Hill", was inspired by Stella Kon's experiences growing up in a household on Emerald Hill in the 1950s. After appreciating the influences and inspirations behind the play, it somehow struck me that the play would offer my contemporaries and myself a glimpse of a lifestyle of the Peranakan family of the 1950s.


At the start of the tour, the curator, Jackie Yoong, shared with us the challenges of presenting an intangible culture like the performing art in the context of a museum exhibition. Midway during the tour, she pointed out the significance of the huge finely-crafted silver trophy that was on display at the exhibition. I was grateful that she did. Otherwise, I would have completely missed learning about its significance. I learnt that the trophy was won by Tan Boo Liat's famous horse, Vanitas, at the Viceroy's Cup in Calcutta in 1898. The cup was made by one of the top silversmiths in India of the time.


The Curator Tour also provided the participants with the opportunities to learn more about Stella Kon's inspirations for writing "Emily of Emerald Hill" and some of the important influences in her life. We learnt that Stella Kon's parents were actively involved in Centre 65, a group that was interested in producing local plays. Stella Kon's mother, Rosie Seow (1922 - 1994), was a noted amateur actress. 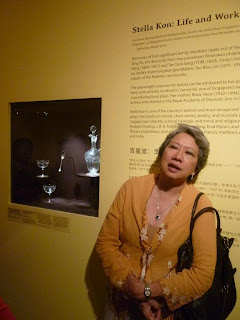 Stella Kon also gave us an appreciation of the significance of a silver spoon which was on display at the exhibition. We also learnt more about the type of clothes that her grandmother would wear. She recalled that the sarong kebaya was more often worn as an informal home-wear. She recalled that her grandmother also wore the cheongsam, which was fashionable in those days.


To help the tour participants appreciate how each actor who has acted as Emily contributed to the interpretation of Emily, our enthusiastic curator brought the tour group to a section of the exhibition that displayed the original costumes, props and scripts used by different actors of the character, Emily. We noticed that the costume chosen by Margaret Chan when she acted as Emily was a kebaya with Japanese-inspired designs. The curator shared with us how the choice of the costumes reflected each actor's interpretation of Emily. 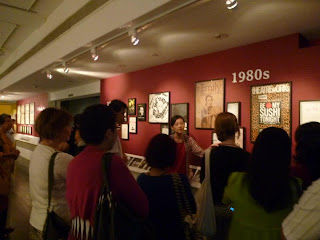 When it was time to conclude, a number of the tour participants took the special opportunity to engage in informal conversations with Stella Kon as well as the curator. Aspiring playwrights and writers will probably deeply appreciate it when the kind and generous Stella Kon shared during the conversations a few helpful advice for budding writers. I recall that the two tips were to start writing, and to start with writing the most interesting part of the story. 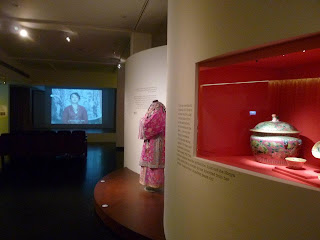 Here is a good piece of news for you if you wish to attend this special Curator Tour led by a curator and the playwright, Stella Kon. There will be another Curator Tour on 24 Jan 2013 (Thu), from 7.30 p.m. to 8.30 p.m. There will be a fee of $25 per participant. For more details, you may wish to contact the Peranakan Museum.

Last but not the least, my heartfelt appreciation to the team at the Peranakan Museum for organizing the Curator Tour with Stella Kon, to Jackie for her enthusiastic sharing and especially to Stella Kon for her generous and kind sharing of insights and anecdotes during the tour.