Emily of Emerald Hill comes alive at the Peranakan Museum


In the intimate spaces of the Peranakan Museum, Margaret Chan's powerful performance in Emily of Emerald Hill makes the one-woman play come alive!


Mysteriously, the performance of Emily of Emerald Hill within the exhibition spaces of the Peranakan Museum has made the performance become an object of contemplation. I started to ask questions in my mind. What kind of challenges did women of the 1950s face? What has made horse-racing one of the favourite past-times of some of the people in that era? What was life like for a Peranakan lady in the 1950s?  The boundaries started becoming rather unclear. Was I simply watching a performance of Emily of Emerald Hill or was I viewing an interactive snapshot of Singapore's past coming alive at the museum?


Although I have no definite conclusion as to whether I was simply watching a one-woman play or whether I was viewing a museum-exhibition of an iconic play that expresses a strong Singaporean identity, it is definite that I was moved by Margaret Chan's excellent performance in Emily of Emerald Hill.

Thanks to the invitation of Jeremiah Choy of Orangedot Productions Pte Ltd, which I had received through the referral from one of my friends, Ms Belinda Tan, I had the privilege to watch Margaret Chan's performance of Emily of Emerald Hill at the Peranakan Museum during the technical rehearsal on 5 July 2012 .


Transforming the exhibition spaces of the Peranakan Museum into a stage can proved to be a technical challenge. Nevertheless the production team has overcame these technical challenges and has magically transformed an exhibition venue into a theatre. Maybe I was wrong. Somehow, I felt that the museum spaces became alive. The museum was no longer exhibiting stationary objects, it was exhibiting an interactive theatrical performance!


I vividly remember various sections from Margaret Chan's performance of Emily of Emerald Hill. As I watched the protagonist, Emily Gan, sharing the story of her life on stage, I felt as if she was confiding to us, the members of the audience, as a friend. When Emily was using the antique telephone to make phone calls, I felt she was revealing to us her multifaceted and complex character. One moment, she would speak in the most courteous manner to a respectable person while on another moment, she would speak in a harsh commanding voice to make her request be known to a subordinate.

There were humourous moments when the audience would be entertained by Emily showing off her skills at cooking the babi buah keluak (i.e. minced pork ribs stuffed into pangium edule seeds) and by the comical mannerisms of Emily reprimanding her servants in an unique language that sounded like Malay mixed with a bit of Hokkien.

One of the most heart-breaking moments of the play was when Emily learnt about the news that her eldest son, Richard, had died overseas. He was suspected to have killed himself.


The complexity of Emily's character was gradually revealed as the play progressed. Margaret Chan's rendition of Emily also vividly brought out Emily's complex relationship with her eldest son, Richard. By the end of play, I felt a sense of compassion for Emily. She seemed to be doing her best to survive in a world with harsh realities. This is a fascinating and moving play to watch. I strongly recommend that all residents of Singapore watch this play at least once in their lifetime.

The public performance of this play will be staged at the Peranakan Museum stage on 7 July 2012 (Sat), at 7.30 p.m. This special performance will be jointly produced by Stella Kon Pte Ltd and Orangedot Productions Pte Ltd, and co-directed by Margaret Chan and Jeremiah Choy. For more details, please visit http://www.peranakanmuseum.sg/exhibitions/eventdetail.asp?eventid=292. 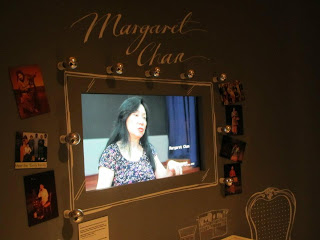 These are a few suggestions to enhance your positive experience of watching Emily of Emerald Hill performed by Margaret Chan:

1) Please set aside some time to visit the exhibition Emily of Emerald Hill: Singapore Identity on Stage. Do not miss the section of the exhibition that examines the origins of the play and its performance history.

2) Please do visit the section of the exhibition that highlights Margaret Chan as one of the major performers of Emily. You may wish to know that Margaret Chan was the first Singaporean who performed the role of Emily Gan in Stella Kon's play, Emily of Emerald Hill. She represented Singapore in the Commonwealth Arts Festival 1986 with a performance in the role of Emily Gan.

3) The performance venue felt as if the air-conditioner was set at a temperature of about 20 degrees Celsius. You may wish to wear warm clothing to keep yourself warm.

***
References and some online pages that are related to this topic: