Special thanks to the civic society My Community and the Queenstown Community, I took part in My Queenstown Heritage Trail on 27 July 2014. This guided tour brought us participants to various parts of Queenstown including Tanglin Halt and Commonwealth Drive.

It was announced by the Housing and Development Board on 27 June 2014 that a total of 31 residential HDB blocks at Tanglin Halt Road and Commonwealth Drive will be redeveloped under the Selective En Bloc Redevelopment Scheme together with the Commonwealth Drive Food Centre, Tanglin Halt Market and about 50 shops and four eating houses in seven shophouse blocks in the Dawson estate. Before these huge changes will take place, it is worthwhile to make a visit to Tanglin Halt and Queenstown to witness its old world charm. One of the interesting aspects of the tour was that participants get to interact with a few of the long-time residents living in Queenstown.


The first stop of My Queenstown Heritage Trail is the former Queenstown Driving Test Centre. The abandoned three-storey building was Singapore's second driving test centre. I learnt that in the past, due to the limited literacy level of the candidates sitting for theory tests at the driving centre, candidates had to move a miniature-sized car on a model in response to questions asked by the tester. As I looked at the areas nearby the former Queenstown Driving Test Centre, I realized that Queenstown has changed a lot since my last stopover at Queenstown MRT station many years ago.


The next stop was the site of the former Queenstown Cinema and Bowling Alley. As I do not have much memories of Queenstown, I could hardly imagine how it looked like in the past. Thankfully, the booklet that I was given at the start of the tour gave me clues of how this site had used to look like before the complex was demolished in 2013.


The tour also brought us to the former Commonwealth Wet Market. I learnt that this building is the only remaining building that was designed by the Singapore Improvement Trust as a wet market. This building has a distinctive parabolic-vaulted roof which allows for rainwater to drain quickly. I heard from a few of the tour participants that they remember eating chicken rice at the former Commonwealth Avenue Wet Market.

At one of our stops, the Queenstown Public Library, there were special arrangements made to visit the library before its operating hours. The Queenstown Library is Singapore's first branch library. Today, it can probably claim itself to be the oldest existing library building in Singapore. My words of appreciation to the friendly staff members of the library for giving us an insightful tour of the library.


The part of the tour at Stirling Road was one of the most interesting for me. I learnt that the HDB Terraces along Stirling Road are the remaining terrace apartments in Queenstown that are designed by the Singapore Improvement Trust. These HDB terraces were completed between 1959 and 1961. Nearby the HDB terraces, there are three 7-storey blocks. These are the first public housing blocks constructed by the Housing and Development Board. One of the residents, Mr Mahmood, shared with us interesting stories of the area. 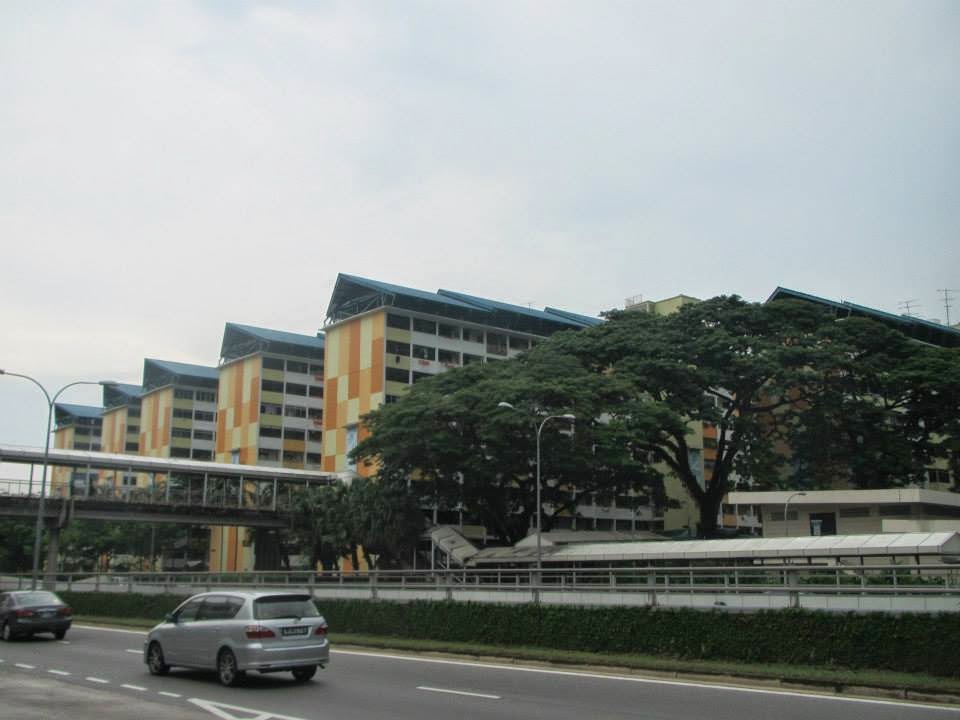 Also at Tanglin Halt, we had the pleasure to speak with two of the residents living in the area. They shared with us their experiences living in Tanglin Halt and about their thoughts of the upcoming Selective En Bloc Redevelopment Scheme. I learnt from them how the residents of Tanglin Halt would look out for one another. One of the residents appreciated that she and one of her neighbours could choose to have their replacement flats nearby each other.


My Queenstown Heritage Trail also took us to the Church of the Blessed Sacrament and Sri Muneeswaran Temple. A few minutes walk away from these places of worship, we found ourselves looking at three-storey flats that are designed by the Singapore Improvement Trust. These low rise apartment flats will be gone soon.


The last stop of the tour was at the wet market in the Tanglin Halt Neighbourhood Centre. I learnt that one of the sundry shops, Thin Huat, has a history that dates back to the 1920s. The sundry shops looked well-stocked with daily necessities. It seemed to be a popular shop for the residents in the area to buy their daily necessities from.


My Queenstown Heritage Trail
The guided tours take place at the last Sunday of every month.
Each guided tour is about 2 hours long and starts punctually at 9 a.m. from Queenstown MRT station.
Guided tours are limited to 25 participants per session, on a first come, first served basis.
Tours are conducted in English and Mandarin only.
Participants are advised to wear comfortable clothes and shoes, bring along a bottle of water, and an umbrella.
To register, visit http://www.myqueenstown.eventbrite.sg or email myqueenstown@gmail.com indicating your name, NRIC/ Passport number and contact details. A confirmation phone call or email will be sent to successful applicants.
Free.

Hi Pei Yun, would have love to say Hello to you :)

Anyway, thanks for adding all the links to the other bloggers, would you mind adding mine too? (have link up to yours on my blog)

Hi Sengkang Babies, thank you for asking! I didn't know you were attending the trail with the other group. Yes, I have added the link to your blog. Nice photos.

How was the nasi bryani lunch?