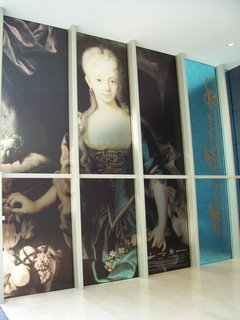 When I visited the exhibition: Maria Theresia - Mother Empress of Hasburg Austria held at the National Museum of Singapore during one of the days in last December, I had felt disappointed that there was no guided tour to the exhibition on that very day.

Perhaps I was too insistent to join the guided tour, I went to make my second visit to the exhibition during one of the recent Saturdays.

I love the guided tour. While it wasn't spectacular or very grand, I like the fact that it gave me a good overview of what I should take note of at the exhibition.

The guide gave a short account to the series of events that had led to the declaration of the Pragmatic Sanctions.


Thanks to the volunteer guide, I became aware that there is a relic being stored in the Reliquary Bust of St Francis Xavier. If you still can't spot it, just simply look closer at what looks like a heart-shaped container found on the chest area of the sculpture. 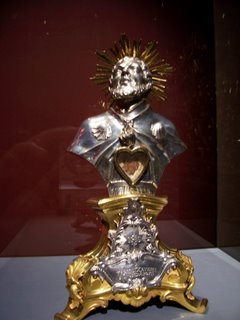 One part that I enjoyed the guided tour was when the guide gave us a short introduction to the background behind the various paintings that were exhibited in the exhibition. Each of these introductions gave me further insights to the imperial family of Maria Theresia. I heard from the guide that in those days when there was no camera or photography technology, Maria Theresia had requested that her children send her paintings on a regular basis so that she could see how her children and grandchildren had been doing.

I realised that I had spent so much time marvelling at the paintings that I did not take any photograph of most of them. Anyway, for your information, all the photographs that you see on this post are taken by yours truly, using non-flash photography. Several of the photos have been digitally enhanced so that they don't turn out too dark-looking. 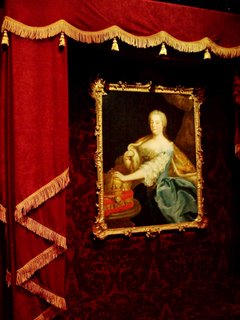 My fascination with how Maria Theresia granted special privileges and rewards to her soldiers led me to take a photo of the following exhibit. 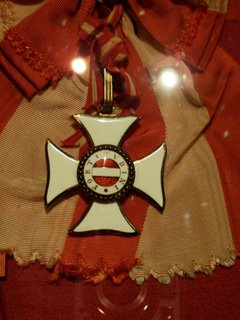 I was also attracted to The insignia of the order of the golden fleece. Its "membership was always strictly limited to members of the Imperial family and the highest of the nobility in Austria and abroad". Make a good guess what the highly stylised "B" from which the gold "fleece" is suspended from represents. If I were to wear this badge in the days of Maria Theresia, it would mean that I was someone from noble background. 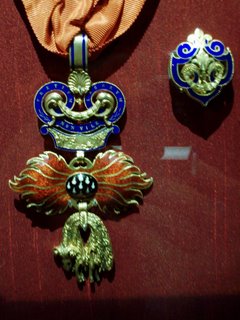 The insignia of the order of the Golden Fleece.
The stylised "B" stands for "Burgundy", in remembrance of Duke Phillip III of Burgundy who had established the order in 1430.

When I was at the exhibition for my second visit, my eyes can't seem to take themselves off the Holy Lance. I like the design of it and it radiated a strong aura of character. 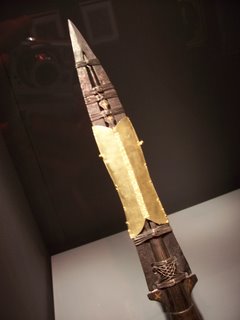 In my post on my first visit to this exhibition, I had made brief mention about one of Maria Theresia's daughters, Marie Antoinette. Here's a bust of her which can be found in the exhibition. 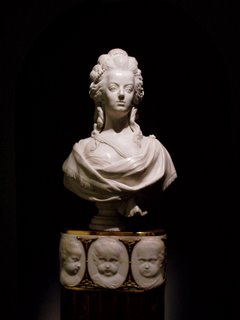 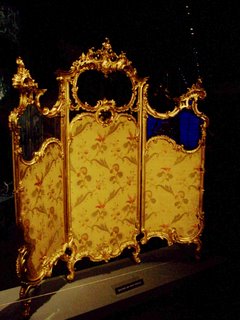 During my second visit to the exhibition, I learnt from the guide that there is something special about this painting of Maria Theresia's husband, Franz Stephan (Francis I). If I remember correctly, this painting has only been restored recently. The painting also gave a more intimate insight to the personality and preferences of Francis I. 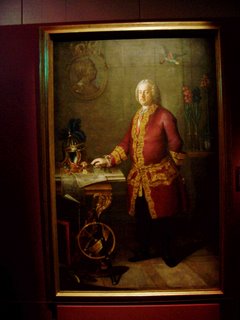 I am glad that I took time to visit the exhibition once again. While the admission ticket didn't come very cheap (it is $8 per adult for admission to this exhibition only), it was worth it considering the fact that I don't have to spend thousand of dollars to fly myself to Austria to view the exhibits.

If you are enticed by my write-up of the exhibition, you may wish to consider visiting this exhibition by tomorrow. It ends on 31 Jan 2007!

Sightings at NAMOS: The making of love letters 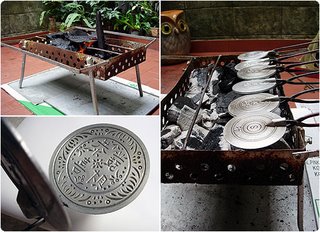 This set of photos right above is taken by Little Miss May.

Last Friday, I have the pleasure to visit the National Museum of Singapore (NAMOS) with one of my friends, Xiaofen, after our dinner. 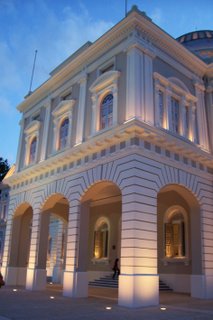 It was already slightly after 8 p.m. when we reached there and the weather was rather wet as it was raining that night. Anyway, nothing seemed to have dampened our spirits to check out the National Museum of Singapore. It was Xiaofen's first visit to the National Museum of Singapore after its recent reopening, so I've made a point to show her to the restored Rotunda stained glass, the Glass Passage, and the Concourse. 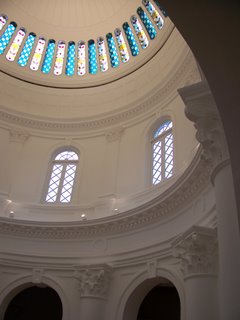 I love the Rotunda stained glass of the National Museum of Singapore.

We checked out three of the Singapore Living Galleries, namely: Film, Fashion, and Food. These galleries "focus on lifestyle themes close to the hearts of Singaporeans"

For the purpose of this very post, I shall only focus on our visit to one of the Singapore Living Galleries: Food. According to a write-up on the museum's website, "This gallery explores the lives of Singaporeans through street food sold by hawkers from 1950s to 1970s"

Xiaofen got me to pay more attention to one of the exhibits that I would normally not have taken much notice of. Previously, before my visit to the museum with her, I had merely took glances of that exhibit thinking that they looked quite like cymbals and I wondered why on earth anyone could cook anything with them. Pardon me, I was awfully ignorant to the functions of the Iron kueh belanda moulds until Xiaofen enlightened me. Now, this is one of the good things about visiting a museum with a friend. One opens oneself to new insights.

Xiaofen shared that when she was younger, she helped her grandmother with the making of love letters. What are love letters? Please don't ask me. Yours truly only know how to eat love letters but I have not much clue how to make them, nor explain what they are like a scholar would.

Xiaofen said that a batter would be mixed. Then the batter would be poured onto the mould which you see right below. I am sorry that they do look like cymbals to yours truly. 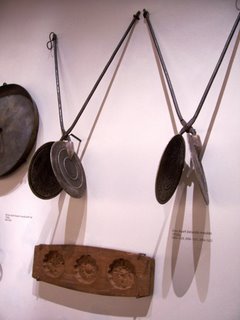 Then she went on to share that in making love letters, she would hold the ends of the handles attached to the moulds very tightly. The tighter she holds the ends of the handles, the flatter the love-letters would be. She went on to share that she would then help her grandmother to place the moulds with batter inside their cores over a charcoal-stove so as to cook the love-letters. It was great that the museum happened to have an exhibit of what looked like a charcoal stove so Xiaofen very delightedly pointed me to it. 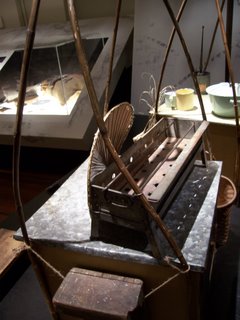 The charcoal-stove. It can also be used to cook satay.

The very first set of photos that you see on this post is taken by Little Miss May. I noticed the version of love letters (also known by some as Kuih Kapit) that she makes is the folded type. Folded or rolled, I love the fragrant smell of love letters. The good quality love letters taste yummy too. 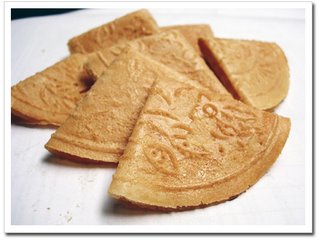 Now, I like the idea of learning something new everyday. One of the most fascinating things that often happens when I visit a museum is that I don't just learn about the past, I tend to get to learn something new too!

**
Do check out these related links:
oh, sweet letters of love (by Little Miss May)
http://www.nationalmuseum.sg/

**
For those who wants a recipe of love letters, I've managed to find one here: http://kuali.com/recipes/viewrecipe.asp?r=305

**
Here are several other blogs that describe about the making of love-letters:
Traditional goodies: Kueh Kapit (by Gentle Ethereal Musings)
The Making Of Kuih Kapit aka Love Letter (by Che-Cheh)
Kueh Kapit (by Brain ooze)