Back to the time of WWII Singapore 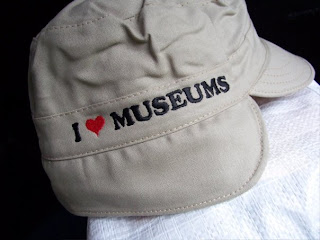 I went for the bus tour entitled War on Wheels, Invasion Singapore! during the weekend. This event gets its participants to discover more about Singapore's World War II history.

It was worth the effort to be out early in the morning on a weekend. The bus tour brought the tour group to several important sites to better appreciate the significant events that had taken place when Singapore was invaded by the Japanese military in 1942. It also gave us a glimpse of the civilians' experience of the Japanese occupation and the end of the occupation. 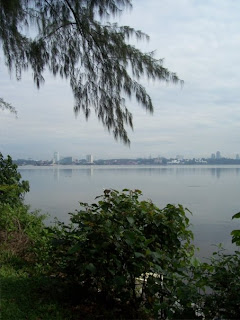 So when the bus brought us participants to the Kranji park which used to be mangrove swamps back in Feb 1942, it was not too difficult to imagine that on 8 Feb 1942, soldiers from the Japanese military had advanced across the Straits of Johor and landed on the main island of Singapore using make-shift boats etc. I realised that the Straits of Johor was a comparatively shallow and narrow body of water. Furthermore, the tides at the Kranji landing sites weren't very strong. What this meant for me was that even when the Causeway was destroyed back then, it was not too much a great challenge for the Japanese to attack and land on Singapore once they have reached the southern tip of the then-Malaya.

If I were a military historian, I think there would be a lot of learning points just by reading the strategies that the British had used to defend Singapore, and the strategies that the Japanese had used to attack Singapore more than six decades ago. At the very least I have learnt from this part of history that one should never underestimate one's enemies when planning one's strategies. 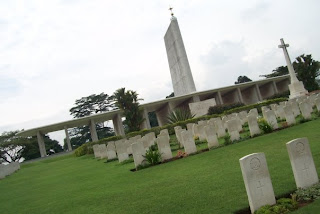 The second stop was the Kranji War Memorial. The memorial was built and maintained by the Commonwealth War Graves Commission. "The Kranji War Memorial commemorates the contributions of 24,000 soldiers of the allied forces who died during World War II" (source: http://infopedia.nl.sg/articles/SIP_183_2004-12-27.html). Participants were invited to a simple activity as an act of remembrance to those who have laid their lives during the war. I shall not attempt to reveal much about the activity here since I figured that some may decide to attend this tour during one of the next two Saturdays.

Having a memorial built for those who have died during the war may bring some comfort to their loved ones and off-springs. On the other hand, the rows of graves and names on the memorial walls reminded me of one thing: War itself has neither eyes nor compassion, even if countless were to die in the name of war.

I wish for peace to prevail. 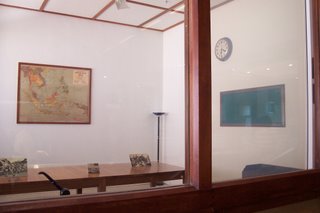 The boardroom. In this boardroom, the British surrendered Singapore to the Japanese on 15 Feb 1942.

At the Memories at Old Ford Factory, there were two short activities that the participants were invited to take part in. During the tour, we also got to see a real "banana money", the official currency that was used during the Japanese Occupation. Well, it reminded me that there are many things that money cannot buy.

Following the stop at the Memories at Old Ford Factory, the bus brought us for a short ride of Alexandra Hospital. This hospital used to serve as a military hospital. On 14 Feb 1942, what I see as a series of atrocious war crimes had taken place here. 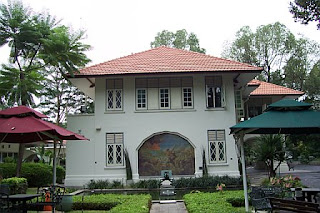 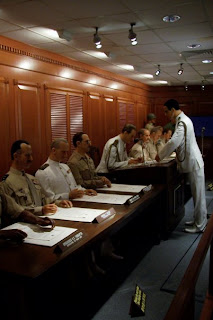 
The tour concluded at City Hall. It was at City Hall, the then Municipal Building of Singapore, where the surrender of the Japanese had taken place. I was imagining that even when everyone cheered for the end of the war, life for people in Singapore would not be quite the same after a war. Nevertheless, the end of the war definitely called for a celebration.

If you should find my short write-up about this bus tour to be interesting, you may wish to know that you can register for this event War on Wheels by visiting SISTIC. There will be bus tours on 21 and 28 Nov 2009 (Saturdays). Please see this site for more information:  http://www.museums.com.sg/es09/war-on-wheels.html
Posted by oceanskies79 at 11/16/2009 09:43:00 pm 1 comment: