Growing up in Ang Mo Kio 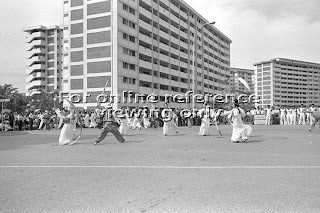 In what I hope would eventually develop to become a series of posts, I shall embark on recollecting some of my memories growing up in this place in Singapore called Ang Mo Kio.

I have spent more than two decades of my life in Ang Mo Kio. While I won't be able to claim that I know every area of Ang Mo Kio, I could say that I do have memories growing up in this place. I have no idea what journey I will be embarking on right here, but hopefully readers of my posts would get a glimpse of Ang Mo Kio from my perspective.

According to Singapore: The Encyclopedia, Ang Mo Kio is the seventh 'new town' (comprehensive town) developed by the Housing & Development Board (HDB).

From what I have read, Ang Mo Kio can be literally translated as "red-haired man's bridge" in Hokkien. In one of the entries on Singapore Infopedia, it was noted that 'ang mo' was a colloqial term for a Caucasian person. Several sources pointed that the bridge that was referred to by the name Ang Mo Kio could be the bridge built by John Turnbull Thomson. However, according to the entry in Singapore: The Encyclopedia, it seemed that maps that predate Thomson's arrival in Singapore had already recorded the name of the area that is known today as Ang Mo Kio as "Amokiah".

Whatever it is, while it satisfies my curiosity to explore how the name Ang Mo Kio had came about, it is not the objective of this series of posts to explore how the name came about. Instead, this series of posts attempt to put down some of my memories of growing up in Ang Mo Kio into words. If this subject matter should interest you, please stay tuned for more posts.

If you would like, you could also join me to contribute posts about your memories of living in Ang Mo Kio.