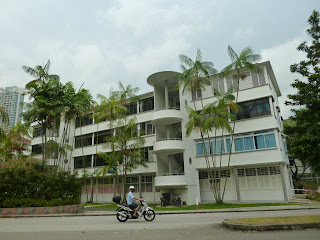 
I visited the OH! Open House Facebook Page and learnt about the queue system. First, participants purchase their tickets at the Tiong Bahru Community Club. The tickets will have the allocated time printed on it. According to the allocated time, participants will join the designated queue to wait for their tour. To maximize the participants' experience of the art walkabout, each tour will have no more than 15 participants onboard. Before the start of the tour, please listen carefully to the house rules announced by the guides.

Here are some of the snapshots of the artworks and glimpses of the Tiong Bahru estate from my OH! Open House walkabout on 18 Feb 2012: 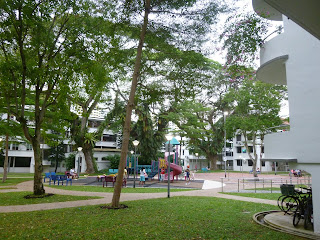 I have found OH! Open House 2012 an interesting event that combines a walkabout the Tiong Bahru estate, house-visiting of a few of the conserved houses, with art appreciation. This event is a must-see for lovers of the Tiong Bahru estate and ardent art lovers who enjoy viewing artworks in the private spaces of residential homes.

Many thanks to the house-owners for their hospitality and generosity. Special thanks to OH! Open House team for putting this event together.

On a special evening at Empress Place, commuters, office-workers and tourists hear the sounds of the high-pitched suona, drums and many other Chinese instruments playing away in the most unexpected place. It seemed to come from a place somewhat nearby the Sir Stamford Raffles landing site. What on earth is going on?

On the evening of 16 and 17 Feb 2012, the Sin Hoe Ping Puppet Troupe （新和平加礼戏班）performs authentic Heng Hua Puppetry at ACM Green, outside the Asian Civilisations Museum (Empress Place). Each of these nights, the Sin Hoe Ping will fascinate its audience with the art of puppetry, music and story-telling through puppetry. The show-times are as follow:


I later learnt that the Sin Hoe Ping Puppet Troupe has a history that can be traced back to before the 1930s, when the troupe was known as De Yue Ban （德月班）in Putian, China. Decades ago, De Yue Ban was one of the puppet troupes that brought the art of puppetry to Singapore. The current troupe leader of Sin Hoe Ping Puppet Troupe, Mr Yang Lai Hao, has been keeping the tradition of Chinese puppetry alive for several decades.


There was a Question-and-Answer session after each of the puppetry performances. I had the pleasure to find out from Mr Yang how long it would take to learn to manipulate the puppets. He said that on the average, it will take about three to five years for a person to learn to do so, subjected to the student's level of interest in puppetry. He shared that he had managed to teach someone the basic steps of manipulating the puppets within a week because the student was a keen learner!

Other than manipulating the puppets, Mr Yang also knows how to fill in every other roles in the troupe. For example, if the troupe needs a person to play any of the musical instruments, he will be ready to fill the role at any time. He is a multi-talented artist indeed.


During one of the performances held on 16 Feb 2012, I observed that a number of the children were intrigued by the puppet performances. Mr Yang Lai Hao is in search of a successor to regenerate the art of puppetry. I wonder if one of these children may eventually become one of the successors sometime in the future? Perhaps one of the members of the audience may be so fascinated with the art of puppetry and will dedicate his time to master the art like Mr Yang?


One of the pleasant surprises of attending the puppet performances was that the audience can enjoy free admission to all galleries at the Asian Civilisations Museum from 6 p.m. to 10 p.m. on both nights. To delight the members of the audience further, there will be Ding Ding Candy, Muah Chee and Dragon Beard Candy available for redemption (while stocks last, terms and conditions apply).


If you are wondering how to spend the Friday night of 17 Feb 2012 in a fascinating way, this is one event you can consider.

Note: "The puppet performances by Sin Hoe Ping Puppet Troupe is part of a three-part arts and culture initiative (Regenerating Communities @ Empress Place) featuring artists, art forms and programmes that draw upon Singapore's rich cultural heritage to revitalise and reaffirm Empress Place as a place of heritage." This event is a collaboration between the Asian Civilisations Museum and the Arts House. Jeremiah Choy is the Creative Director for Regenerating Communities.


Great minds think alike. A loose group of strangers who became friends on the Facebook page, Heritage Singapore - Bukit Brown Cemetery, came up with the online site, a.t. Bukit Brown, to share the stories and knowledge about Bukit Brown Cemetery. Here's a special thumbs up for this new site: