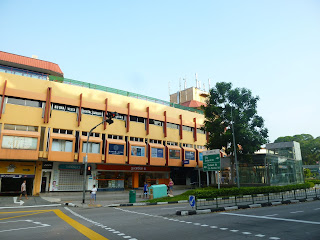 The Commonwealth and Holland Village heritage tour traces "the evolution of Queenstown's colourful social history from a rubber plantation in the 1870s to a bustling military village in the 1930s and a renowned expatriate center in the 2000s."

Chip Bee Gardens
The tour started out near the Holland Village MRT station. I learnt that the area fondly referred to as Holland Village expanded in the 1950s and 1960s as a consequence of the expanding suburban civilian and military population in Queenstown and Alexandra. During the period of the 1950s and 1960s, the Chip Bee estate was established to house the British army personnel and families based in the nearby Pasir Panjang and Alexandra. With such an interesting history, the Chip Bee Gardens was an apt site to start this heritage tour with.

The open-air Eng Wah Theatre
Think of Holland Village and most people will associate it with a bustling yuppie community today. Before the restaurants and cafes spruced up in Holland Village, what did people do to entertain themselves in the past? 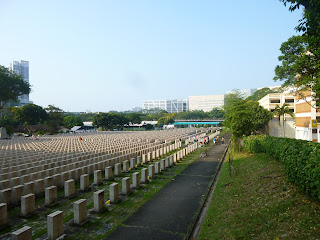 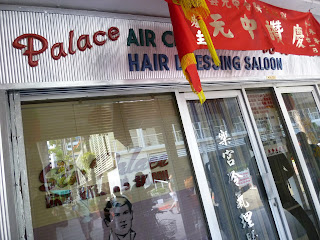 The First Flatted Factory & former Tanglin Halt industrial estate
Our visit to Block 115 Commonwealth Drive, Singapore's first flatted factory, together with our visit to the MOE Heritage Centre reinforced the idea that Queenstown was designed to be a self-contained New Town. Residents of the Queenstown estate could live, work and study within the estate.

We had the pleasure to listen to the personal accounts by Mdm Noorsia Binte Abdul Gani, one of the residents regarding her experiences living, working and raising her children. 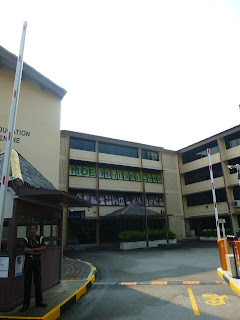 MOE Heritage Centre
Our visit to the MOE Heritage Centre lent us to rich personal accounts by one of the volunteer guides who has decades of experiences as an educator. I appreciate the interesting stories of how the education system in Singapore has evolved over the years.


81 Commonwealth Close
This block is also known as the VIP Block in Queenstown. This block has been visited by many foreign dignitaries for the panoramic views of Queenstown which showcased Singapore's success in public housing.

The interesting part of the tour was to listen to the personal accounts by residents living in the block about their experiences living in Queenstown.

A stroll within this area was a huge contrast to the housing estate of Queenstown. The visit to this conservation area concluded the Commonwealth and Holland Village heritage tour.

***
If reading about this tour had interest you, here are the details to register for this tour:

Volunteers Recruitment for Friends of My Community 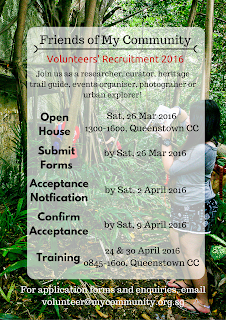 A Heritage Trail to look out for 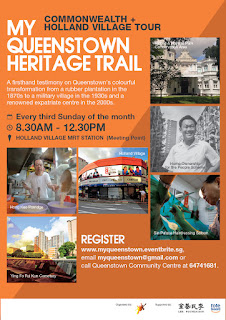 Here is a My Queenstown Heritage Trail to look out for.

This tour to the Commonwealth and Holland Village area brings its guests to learn about how a part of Queenstown transformed from a rubber planation in the 1870s to a military village in the 1930s and then to a renowned expatriate centre in the 2000s.

Email ThisBlogThis!Share to TwitterShare to FacebookShare to Pinterest
Labels: Queenstown 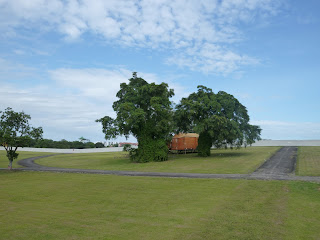 These few weeks, on the green open spaces of the Bidadari Field, passerby will have the opportunity to witness an installation that looks like a wayang stage. This wooden structure conceived by Randy Chan is titled Palimpsest (2016). 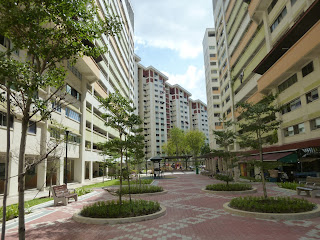 For this year's art walkabout, much of the tour was spent visiting spaces in the public housing estate of Potong Pasir. I witnessed for myself that the estate was going through a series of upgrading. Construction can be found easily at many corners of the estate. 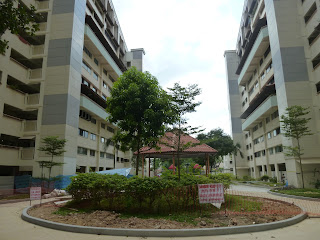 Do you know what the words "Potong Pasir" mean? "Potong" means cut, and "Pasir" means sand. One of the artists, Ong Kian Peng, presents two sandscape installations to recall Potong Pasir's origins as a sand quarry by the Kallang River for this year's OH! Open House.


I had the pleasure to attend one of the Director's Cut tours on the first weekend of OH! Potong Pasir. One of my favourite segments of the tour was the visual to a beautiful and scenic view of the Kallang River from Jacob Ballas Bridge that connects St Andrew's Junior School and St Andrew's Junior College. I felt thankful for the good weather. Nature is a brilliant artist! 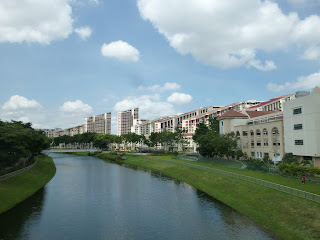 Other than the privilege to explore the public housing estate of Potong Pasir, OH! Potong Pasir brought us to recollect a place that no longer exist now, the Alkaff Gardens. While learning about a place which I totally had no personal experience of, I start to wonder if I had missed out on any interesting experiences. When wondering, I awed at the ideas behind the work, Consigned, by Tan Wee Lit.


What about more of the art pieces that are showcased during OH! Potong Pasir? Patience please. An art walkabout like OH! Open House has to be experienced, and not read. How about signing up for one of the tours instead?


Tip: Please wear comfortable shoes and appropriate clothing. Bring along a bottle of water. It will come in handy on a hot day especially.
Posted by oceanskies79 at 3/14/2016 09:40:00 pm No comments: