Growing up in Ang Mo Kio: Here comes the MRT! 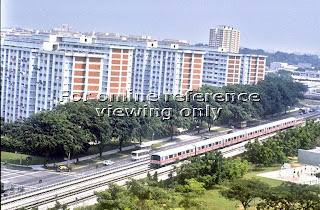 In 1987, as a resident of Ang Mo Kio, I was introduced to a totally new way of travelling about from one place to another. This was the year when the Mass Rapid Transit system became accessible to the people in Singapore. One of the first few stations that went into operation was the Ang Mo Kio MRT station.

As each of the Commemorative tickets were meant for one round trip, my family would alight from the train at each station from Yio Chu Kang to Toa Payoh, but without going out of the stations through the fare-gates. This was so that we could see how different each station looked.

The Primary School that I studied in was located pretty nearby part of the MRT train tracks. Perhaps the MRT train was such a new mode of transport for me and my classmates back then in 1987, when the MRT system first started its operation, my classmates and I would have the tendencies to look out of the classroom windows to take a peep whenever we hear a MRT train passing by. Our teachers would have to remind us to pay attention in class. Soon after, the sense of novelty wore off. 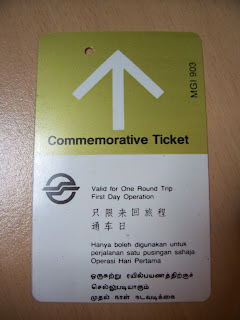 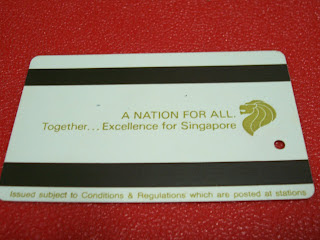 The commemorative ticket issued in year 1987 for travel on the first day of operation of the SMRT train system. Thanks to my dear mother who has actually kept this ticket for twenty years! 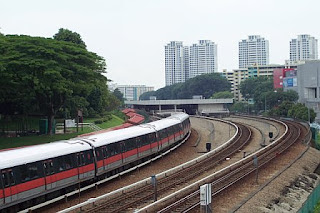 Today, the SMRT train system has become my main mode of transport. Perhaps this is so because there is a MRT station right in Ang Mo Kio, very accessible from where I have been living for the past two decades and more.

What was it like for you when the MRT first started its operation in the year 1987? If you have a personal story to share on Yesterday.sg, do check this page to find out how you could do so. 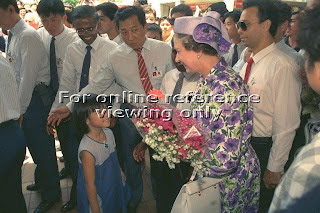 The preparations for her visit had probably started weeks and even months before her actual visit. I remember that void decks, lifts, stairways and so forth of the vicinity that she would be visiting were cleaned with lots of pride in preparation for her visit. On the day of her visit, the walkways of the selected HDB flat that she used were laid with red carpet. Even the floor of the lift itself was carpeted, I had heard. 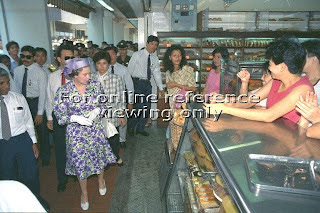 
Townsville Primary School that I was studying in, was selected to be the school that Her Majesty Queen Elizabeth II would visit. Her visit was a grand event for the school. I recalled that the students were asked to line ourselves up at various locations of the school so that Her Majesty Queen Elizabeth II would be greeted by orderly lined-up students when she tours the school compounds. I vaguely remember that there was a couple of rehearsals to prepare for this special occasion.

One of the instructions that were given to us, the students, was that our back should not face the queen when she tours the school compound. We were told to smile too. I think any children would smile if we were told that we can look forward to a treat to ice-cream after Her Majesty's visit. Of course, there wasn't such a treat for us, but we tried to be on our best behaviours that day. 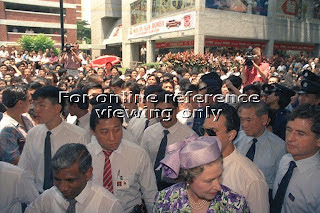 
From the photos from the National Archives of Singapore found on this post, we can see that the residents of Ang Mo Kio were excited to welcome Her Majesty Queen Elizabeth II.

On the side, the photos from 1989 have made me realised that Ang Mo Kio has changed quite a far bit over the past 18 years.