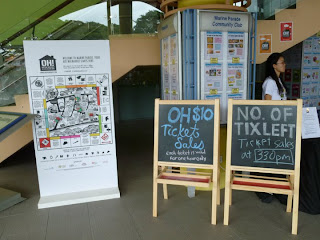 Thanks to a series of network via Facebook, I got to learn about OH! Open House last weekend. Initially, I was rather hesitant whether to attend OH! Open House. Afterall, the east region of Singapore is fairly out of the way for me. Then again, I figured that it would be a special experience for me. As such, I took a bus and travelled slightly less than an hour to get to Marine Parade Community Club where the tour would begin.

I was feeling thankful that I had got myself a ticket to one of the OH! Open House tours. When it was time for the tour to start, I was feeling excited and was looking forward to see art in people's homes. It felt like art would be brought into the homes. Inspirations from art would soon transform the familiar dwelling spaces into creative spaces. 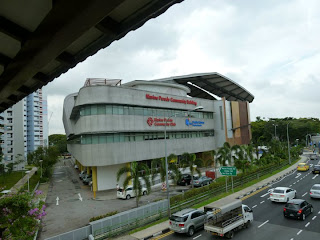 Off we went on our art walkabout. On our way to the first home, we heard some ghost stories. That seemed to be the opening to one of the works that we would get to see at our first destination. As I walked past the public housing which we fondly refer to as the HDB (Housing & Development Board) flats, I could imagine a fairly strong community spirit lingering in the Marine Parade estate. 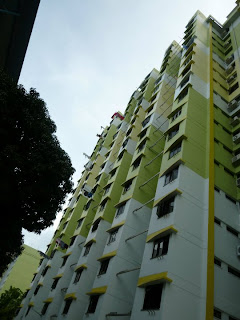 I saw a number of interesting works at the five different homes whose owners have so kindly opened their homes to the OH! Open House event. Many of the artworks seem to take into consideration of the spaces of the owners' home and of the owners' personalities.

I was particularly intrigued with the eulogies. There was an eulogy in each and every home. The eulogies me made wonder how I would like my own eulogy to be if I were to leave this world. I suppose if I would like to have my eulogy written the way I would like it to, I would have to be living my life meaningfully first. That somehow reminded me if we are preparing to die meaningfully, we have to first start by living our lives meaningfully. 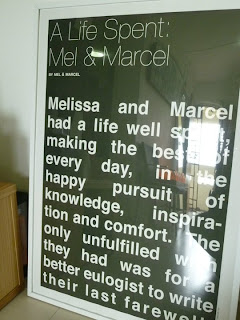 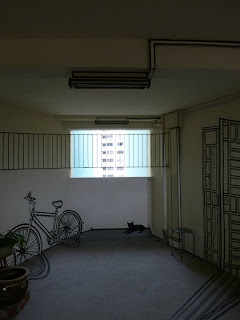 Teng Yen Lin's works were pretty interesting to me too. I simply like the ways she play with lines and perception. I have also found the last work to be viewed during the tour, Angel, by Clare Marie Ryan and Marc Gabriel Loh to be a thoughtfully conceptualised installation. I like most of the artworks that were being showcased at the OH! Open House. Some of the most interesting works at this event are best seen in person. As such, I have decided not to show too many photographs of the OH! Open House. Afterall, it is better to attend OH! Open House to experience art in the familiar homes in the heartlands than to look at photographs of the event.

OH! Open House is not just about art and more art. The tour also offered a glimpse to the social history of Marine Parade. I learnt about the dolphin mascot of Marine Parade and saw a number of them! I also found out where the first Bengawan Solo in Singapore is located. I have found out that there is this website that offers an insider's scoop on Marine Parade: http://www.ohmarineparade.blogspot.com. 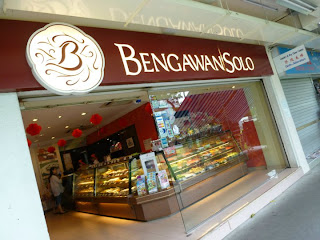 Each tour takes approximately 1.5 hours. Please do wear comfortable shoes that can taken off easily. Respect the house rules, the owners and the guides. Last but not the least, be inspired by the art!

The first OH! Open House tour for each day starts at 4 p.m. The last ticket sales is at 7 p.m. The houses close at 8 p.m.

This event is supported under the National Heritage Board’s Heritage Industry Incentive Programme (HI2P).
Posted by oceanskies79 at 1/12/2011 12:51:00 am 4 comments: