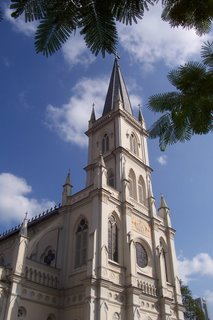 Foreword: This post is adapted from one of the posts that I have written on Yesterday.sg

The speaker, Mr Han Tan Juan (veteran journalist and cultural researcher), shared with us some interesting pieces of information that I had never knew of until that day. Let me give you some examples:
- Why was the St Joseph's Institution building in Bras Basah popularly referred to as the "Three Figures"（san gong gia)?
- Brass Bassa” means "Wet Rice" in Malay.
- The prison that used to sit on the grounds of Bras Basah area.

He also spoke about how the French had contributed to education in Singapore when Singapore was a British colony.

Mr Han also shared briefly about the Convent of the Holy Infant Jesus (CHIJ) during the programme. This convent has been restored to become what we now commonly refer to as CHIJMES.

The convent was first set up with the intention of providing education for girls. In 1854, poor and disabled girls were sent there. Babies were abandoned at the Convent gates. As such, the convent evolved to become the Convent Orphanage and Home for Abandoned Babies.

The gate where babies were abandoned was referred to as The Gate of Hope. We can still see it today. It is located within the current premises of CHIJMES. To attempt to keep readers in suspense, I shall not disclose the exact location. The challenge is for you to find its exact current location.

Here is a glimpse of how The Gate of Hope looks like: 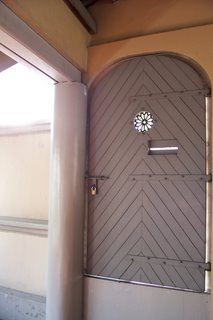 The Gate of Hope

The nearby plaque reads, "At this small gate of the former Convent of the Holy Infant Jesus (CHIJ), many babies were abandoned in basket to be picked by the Sisters of the Convent. This was the origin of the Home for Abandoned Babies..."

The plaque summarised the functions served by the small gate that you would see on the photograph above. I was told that the Sisters would purposely not have anyone to watch the gate. This is so that the identities of whoever had chosen to abandon the babies would be kept unknown. The babies were cared for and given education. They were given, hope. 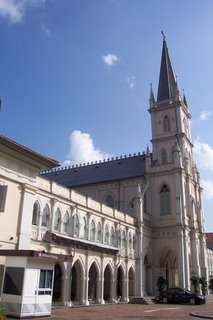 Today, CHIJMES is a premiere lifestyle location. I particularly like its architectural style. There are also some good dining places within the premises of CHIJMES. I might have tried sampling the food from all the restaurants in its premises if not for the fact that I am yet a billionaire.

There is so much history that CHIJMES could tell. For your convenience, I shall leave you with some URLs to read for more information about the past of CHIJMES. Enjoy!
- http://www.chijmes.com.sg/non_flash/about_us/story_chijmes.htm
- http://itclub.vs.moe.edu.sg/cyberfair2003/landmarks/chijmes.html
- http://www.nhb.gov.sg/MT/trail_chjimes.htm
- http://web.singnet.com.sg/~ijhcc1/history.html

If you have been tempted to attend similar programmes at the Singapore Art Museum, I suggest that you could check out this site (http://www.nhb.gov.sg/SAM/ProgramsEvents/Highlights/) for more information.
Posted by oceanskies79 at 3/11/2006 06:45:00 pm