"Yesterday Once More" at Imbiah Lookout 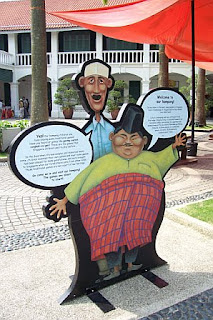 On 25 Nov 2007, while I was at Imbiah Lookout on Sentosa island, I found myself being greeted by two fine gentlemen who welcomed me to their kampong. Kampongs are rural settlements, and they once used to be common in Singapore.

The two fine gentlemen's kampong was an interesting one. The children of their kampong didn't play Nintendo Wii but they had other interesting games to play nevertheless. What did they play at their kampong? 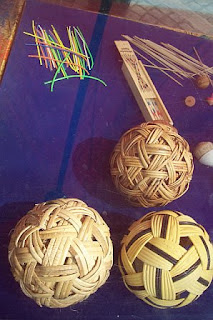 I found out that the rattan-looking balls that was played in their kampung were called Sepak Takraw. I have had no idea how they play it, but I have managed to find information on how they did so while I was visiting their kampong. For the internet-savy folks from my era, the Singapore Sports Council's Sport Museum has a webpage that provides succinct information about how Sepak Tahraw is being played. Please click here for the link. 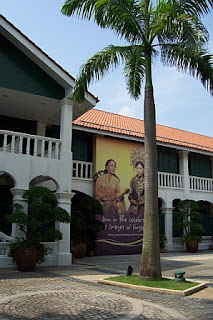 Nearby the kampong was the Images of Singapore museum. I was pleasantly surprised to find scenes of kampong life in the museum's premises. The wax-figurine children of the museum's kampong played similar games like the children from the two fine gentlemen's kampong. 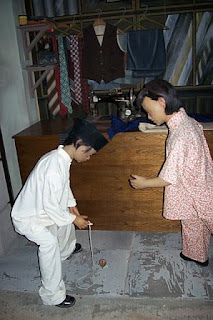 If you have guessed it right, the two children in the above photo are playing gasing, which means "top" in Malay. I tried playing it and personally found that it requires quite some skills in order to get the top to spin. More information about this game can be found here. 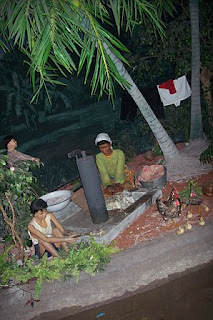 As I walked about to look at the various scenes of kampong life that were found within Images of Singapore, I chanced upon two young lads who were sitting down and engrossed in playing a game. 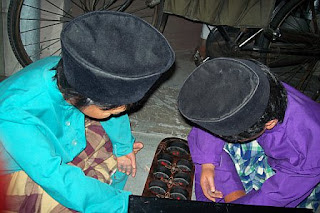 They were playing the game called Congkak. Earlier the day, when I was at the two fine gentlemen's kampong, I have had the pleasure to learn to play the Malay version of the Congkak game. I heard that the Indians have another version of playing this game. The aim of the game is to gather as many Congkak seeds into the storehouse on the player's side. I quite like this game because in order to achieve the objective, one would need to think strategically and to count well. 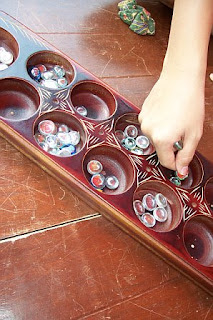 If you are wondering how to play Congkak, do check this webpage by the SSC Sports Museum. 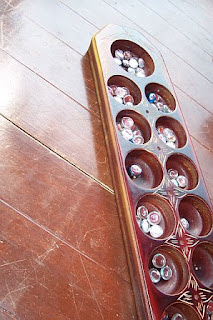 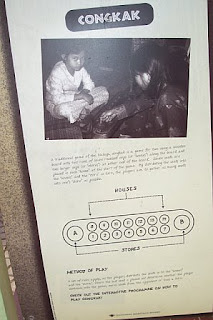 After having fun learning about the games people play in the kampongs, I went to tour the "Yesterday Once More" carnival that was being held at the two gentlemen's kampong. Exhibition panels like the one below helped lend me insights to the differences in architectural styles between the kampong houses belonging to the Chinese and those belonging to the Malays. 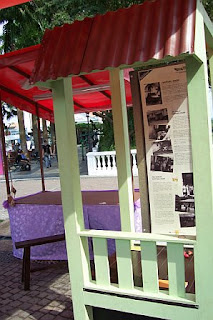 When I started feeling hungry, I approached one of the hawkers nearby to get some food to stop the hunger. 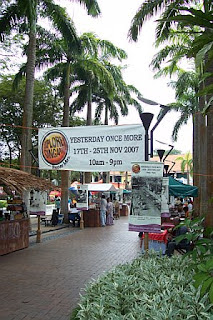 For someone like myself who have never grown up in a kampong, it was an interesting experience to learn about how life in a kampong was like. I could infer that there was a strong sense of mutual help and support present in a kampong community. In those times when there were neither broadband nor electronic devices, I suppose the people must have been pretty innovative to come up with interesting games to engage the young ones.

Both the "Yesterday Once More" carnival at Imbiah Lookout and the temporary kampong of the two gentlemen have ended on 25 Nov 2007. However, folks who are interested in visiting Images of Singapore at Imbiah Lookout, Sentosa, can refer to the following visitors' information:

Email ThisBlogThis!Share to TwitterShare to FacebookShare to Pinterest
Labels: heritage

Actually most of the kampong games you described are not familiar to me. I think those days, there's a difference between Chinese kampongs and Malay kampongs. The one featured here is a Malay kampong. The one I grew up in at Lorong Chuan was a Chinese kampong; so were those nearby. Maybe I should blog about it to explain a bit more.

Hi Chun See: Thank you for enlighten me about the games. As you would have figured out, I have not lived in a kampong. I look forward to your blog post.