The exhibition: Xu Beihong in Nanyang 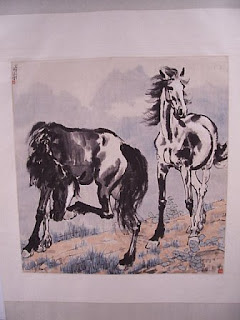 A Pair of Horse.
This work was a gift of the Tan family to
Singapore's Asian Civilisation Museum, in memory of the late Dr Tan Tsze Chor.

I was first acquainted with the artist, Xu Beihong, during one of my Higher Chinese lessons more than a decade ago. There was a chapter in the one of the Higher Chinese textbooks on him. I vaguely recall from the lesson that Xu Beihong was very skilled in painting horses. 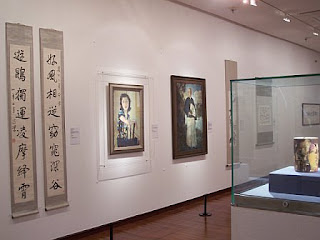 Yet, Xu Beihong was more than a painter of horses. In the current exhibition, Xu Beihong in Nanyang, at the Singapore Art Museum, visitors will be able to appreciate the various range of works by Xu Beihong, from calligraphy, traditional Chinese ink painting, oil paintings, ceramics and more.

Xu Beihong in Nanyang is jointly organised by the Singapore Art Museum and the Xu Beihong Art Museum (Beijing). It showcases 90 artworks created by Xu Beihong in the 1930s and early 1940s. In this exhibition, visitors will have the rare opportunity to view some of the major works by Xu Beihong. A number of the works that are shown in the exhibition are actually being loaned by private collectors who have so generously supported the exhibiton. 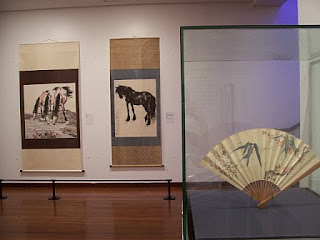 This is a section on Xu Beihong and Loh Cheng Chuan.

I have had the pleasure to attend the one of the Curatours that was held in conjunction with the exhibition. It gave me more insights to understanding Xu Beihong and his art. I learnt that Xu Beihong promoted the use of scientific realism and the direct study of nature. As such, it was no surprise that Xu Beihong's works portray the subjects in realistic manner.

One thing that I find interesting about this exhibition is that it weaves in how various patrons of art and friends of Xu Beihong have been important to Xu Beihong's career as an artist. 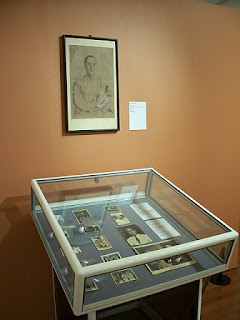 The painting is that of Mr Huang Manshi.
Right below are photographs of Xu Beihong, the Huang Brothers, and other art patrons.

The works of the exhibition are being displayed in exhibition galleries spanning three different levels. On the third level of the exhibition, other than paintings by Xu Beihong, one can view snippets of video recordings from a eight-episodes TV serial on Xu Beihong. These recordings are in Mandarin and are certainly worth a watch for those who are interested in know more about Xu Beihong. 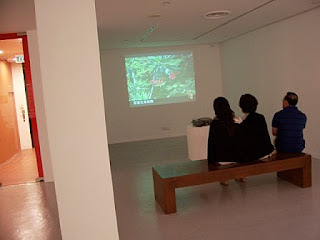 Among the works exhibited in the section, Xu Beihong in India, is a sketch by Xu Beihong of a portrait of Mahatma Gandhi, which includes a signature by Gandhi himself. From this section, I particularly like Portrait of Rabindranath Tagore (1940) which was painted by Xu Beihong in Chinese ink and colour work. It is a good example of how Xu Beihong fused Western and Chinese art techniques. 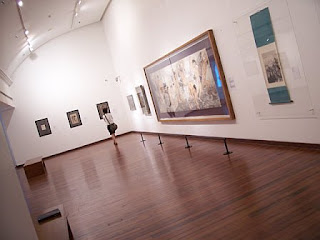 The section: Xu Beihong in India
The large 4.2 metres wide painting on the right of this photo is
The Foolish Old Man Who Removed the Mountains (1940).

One should take time to appreciate The Foolish Old Man Who Removed the Mountains (1940). Do visit the exhibition to find out the significance behind this work and how it was used by Xu Beihong as a metaphor to praise the Chinese in their anti-Japanese efforts.

Xu Beihong's patriotism and his anti-war sentiments can also be sensed in his other works such as Put Down Your Whip (1939). This work was created right here in Singapore. The curator, Low Sze Wee, shared during the Curatour that the lady in the centre of this work was actress Wang Ying. Put Down Your Whip is an anti-war street-play. The accompanying write-up found next to this oil painting gives succinct information about the street-play. I personally think that it is a very beautiful piece of work. 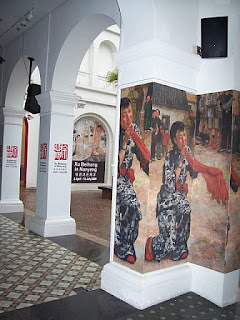 The wall posters just outside the exhibition galleries in some ways prompt visitors to two of the major works that they must view at the exhibition.

Visitors should also spend time viewing the various portraits done by Xu Beihong. Many of these portraits are either of prominent figures or the family members of prominent figures of the Chinese society of the 1930s - 1940s. One example of such portraits shown in this exhibition is Portrait of Lim Loh (1927). Lim Loh is the father of the war hero, Lim Bo Seng.

Reflecting, I think it is apt that the curators of the exhibition have placed Slave and Lion (1924) as one of the first works that visitors would see at the first level of the exhibition. This work is based on a Roman story "of how a lion refused to attack a slave in a death-match because the former remembered that the latter had previously helped to remove a thorn from its paw." It was essentially a story of gratitude. 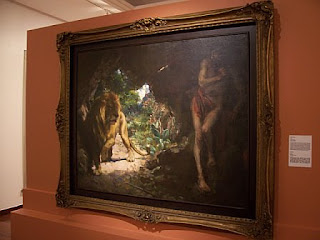 In the year 1939, Xu Beihong held an exhibition to raise funds for the war refugees in China. The exhibition attracted more than 30 000 people. Back then, I understand that the population of Singapore was about 600 000. I am sure it will be heartening for the organisers of the exhibition if Xu Beihong in Nanyang could enjoy similar overwhelming response as the 1939 exhibition.

Xu Beihong in Nanyang is definitely worth a visit for anyone who is interested in the works of this master, and how Singapore and the Nanyang area have been significant to the art-career of Xu Beihong. It will be held at the Singapore Art Museum from 5 April to 13 July 2008 17 Aug 2008 (extended due to overwhelming response). Visitor information to the Singapore Art Museum can be found here: http://www.nhb.gov.sg/SAM/Information/VisitorInformation/VisitorInformation.htm

For visitors who would like to learn more about Xu Beihong and the works that are on display at the exhibition, I understand that there is a bilingual catalogue of the same title as the exhibition on sale (ISBN: 978-981-08-0180-9) at the museum shop.

Many thanks to the Singapore Art Museum for granting the permission to take non-flash-photography at the exhibition. Thanks to Wei Chong for his help in facilitating my request.

i love historical exhibits. it reminds of our culture and of our ancetors.