One of the most treasured networks: The Silk Road 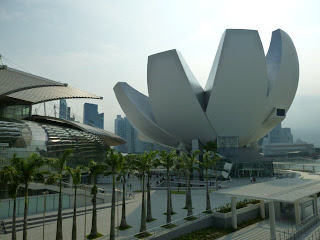 After a visit to the Traveling the Silk Road: Ancient Pathway to the Modern World exhibition at the ArtScience Museum, I am in the humble opinion that the Silk Road is perhaps one of the most treasured networks in history. Perhaps like today's Facebook, the Silk Road has in many ways facilitated people of various cultures and religions to interact and connect with one another. The sharing of technologies and knowledge amongst the various cultures was also facilitated through the Silk Road. 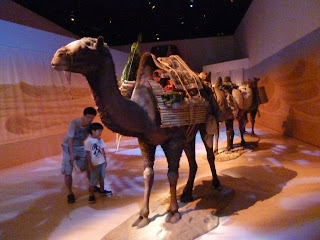 Many thanks to the ArtScience Museum, the National Heritage Board and Mr Shaun Wong, I was invited to a special guided tour and a complimentary visit to the ArtScience Museum on 20 Mar 2011. Other than the special guided tour by one of the museum's personnel, I have had the privilege to participate in the "Discovery Tour by Curator – Silk Road" by Professor Morris Rossabi, historian of China and Central Asia at Columbia University. 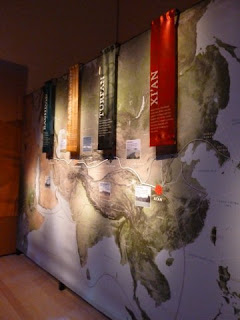 The Silk Road is "an extensive interconnected network of trade routes across the Asian continent connecting East, South, and Western Asia with the Mediterranean world, as well as North and Northeast Africa and Europe" (source: wikipedia). Although, silk was one of the more lucractive commodities that was traded along the Silk Road, items such as fabrics, medicines, perfume and spices were exchanged along this extensive network as well.  I was curious to learn about this network such that when I was at the Traveling the Silk Road, I could not help but to spend my time looking at maps and more maps. I wished I could have a bit more time to scrutinise the maps, however. 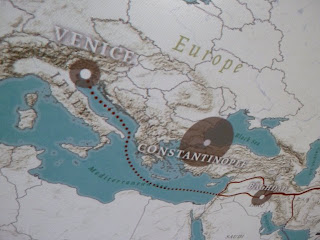 For this exhibition, the American Museum of Natural History which has organised the exhibition has selected four cities to focus attention on. These four cities are: Xi-an, Turfan, Baghdad and Samarkand. I learnt that Turfan is such a hot place that most people there prefer to trade at night when the sun was down. It was interesting to learn that Baghdad was founded in AD 762. Baghdad was the capital of the Islamic world. Many people travelled to Baghdad for the purpose of commerce and of acquiring knowledge. I wonder what it would be like if I were to visit it one day? 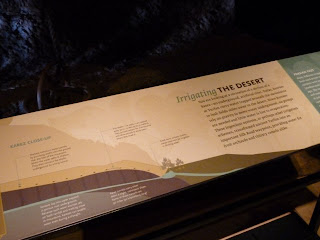 The technologies of making Chinese silk and paper, the Turfan's artifical underground river system known as the "karez" and the astrolabe also captured a good fraction of my attention. The explanatory notes on these technologies were rather simple for a lay-person to understand.

I learnt that the Chinese had closely guarded the secrets behind the technologies of making silk and paper. However, since one of mankind's motivations is to learn, specifically to learn the best available ways to meet some of mankind's needs, it was just a matter of time before other cultures learnt about the Chinese secrets of making silk and paper. 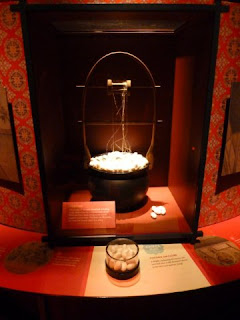 Visitors to this exhibition will find many of the exhibits very interactive. Children visiting this exhibition are unlikely to be disappointed either. There is an interactive Silk Road map whereby visitors can learn about the links among cultures and technology along the Silk Road. 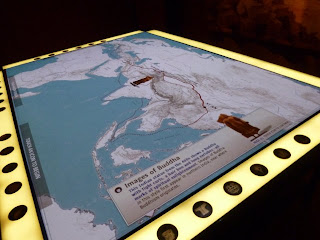 There is a working model of an Islamic astrolabe whereby one could attempt to determine the time with the help of the position of the embedded "stars". I had tried my hands on using the astrolabe and I think it worked like a super-computer of the ancient world. It was quite a challenge for me to use it with precision. 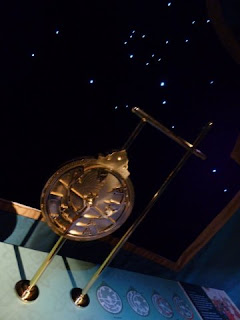 For visitors with keen sense of smell, they could have the chance to sniff the fragrance of various essential oils that were commonly traded along the Silk Road. My favourite was the rose oil. I wonder what your favourite would be? 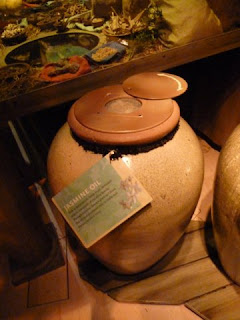 I was also intrigued by the interactive section on Chinese music instruments where I could recreate the sounds of some traditional instruments. With a press of one of the buttons, I could listen to the electronically pre-recorded sound of a specified instrument. If a visitor were to press on all the buttons, Voila! he would hear an ensemble playing away. 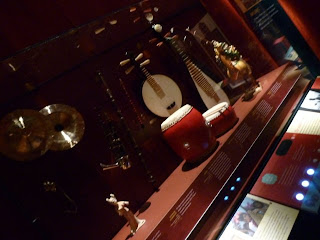 The last section of the exhibition discusses about the maritime Silk Road routes. Visitors could even catch a glimpse of a full-sized model of a 71-foot long Arab sailing ship called the dhow. I have learnt that a "dhow" is a light-weight boat. 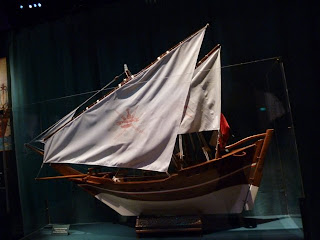 One particular statement that was made by Professor Rossabi during the tour by the curator that had remained in my mind was that the cultural significance of the Silk Road far exceeds its economic significance. The Silk Road provided the network and the environment for people of various cultures to share and exchange culturally.

Interestingly, many of the people travelled along the Silk Road not to promote their culture. It appears that one of the main motivations for people to travel the long and gruelling distances of the Silk Road was to earn more money. To gain an appreciation, please imagine how people would so willingly pay for exotic goods from far-away lands at a high premium. Of course, there were others who had travelled in search of knowledge. There were also pilgrims, for example the Buddhist monk Xuanzang, who had travelled long distances along the Silk Road to acquire deeper religious understanding. 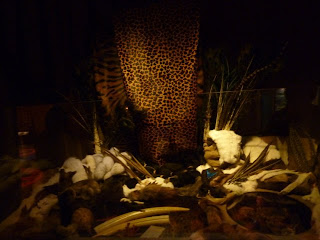 What can our modern society learn from this century-old special network called the Silk Road? I suppose some of the most important values that we can learn from Silk Road are tolerance, respect and open-mindedness. Tolerance and respect could make room for different cultural beliefs and practices to co-exist in harmony with one another. On the other hand, open-mindedness allow one to be open to learn from another culture that could be different from one's own. 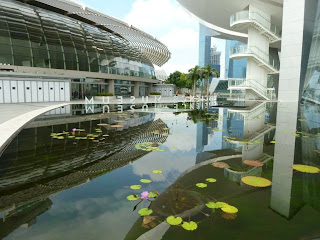 The Traveling the Silk Road: Ancient Pathway to the Modern World exhibition at the ArtScience Museum, Singapore will end this coming weekend, on 27 Mar 2011.

I have learnt from a few fellow visitors that reentry to the museum (even on the same day) would require a purchase of a new ticket! Please trust that many visitors have given feedback to the museum to request for same-day reentry to be allowed. As for the ticket price, I would suggest a concessionary rate for all students  who can produce the necessary proof of identity, even if they visit the museum as an individual (and not part of a school group). Afterall, I see museums as institutions that encourage learning, and it will make good sense that museums perform their social mission well by making it affordable for students to visit and to learn at the museums.

On the whole, The Traveling the Silk Road: Ancient Pathway to the Modern World is an exhibition with many interactive and interesting exhibits. While I acknowledge that the admission price could be made less exclusive, I would still recommend this exhibition for anyone who would like to learn more about the Silk Road but for some reasons may not be able to visit the cities along Silk Road in the immediate future. Each ticket to the ArtScience Museum still works out to be considerably less than the cost of a plane ticket to most places.

****
Related posts by other authors:
The Silk, Sunken and Spears - Chapter One by Urban Explorers of Singapore.
Sponsored Event: Trip to ArtScience Museum at Marina Bay Sands on Sunday, 20 March 2011 by Jade Isabelle.
A day at the ArtScience Museum by Nur Shakylla Nadhra.
Posted by oceanskies79 at 3/22/2011 12:38:00 am