The Tanjong Pagar Railway Station Tour on 21 May 2011

Being a regular reader of Yesterday.sg and a fan of I Love Museum Facebook page has its special privileges and perks.

Even when all of the weekend special tours of the Tanjong Pagar Railway Station conducted by the Preservation of Monuments Board have been fully booked, lucky readers of Yesterday.sg and Facebook fans of I Love Museum could still secure very special places in one of the  Tanjong Pagar Railway Station Tour led by guides from Preservation of Monuments Board on a Saturday morning of 21 May 2011. The railway station will cease operations by 1 Jul 2011. 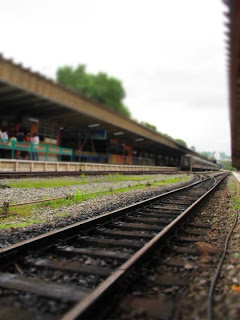 Located along Keppel Road, the Tanjong Pagar Railway Station was opened in 1932. During the tour, we learnt about why the location was chosen to be the site of the railway station. The location was specially chosen to best realize the British Empire's vision of creating an extensive transport network across land and sea in this part of the region. 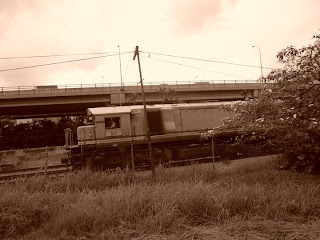 The tour also gave us a glimpse of the history of the railway transport system in Singapore. I learnt about the previous existence of the Tank Road railway station. This railway station was closed permanently on the same date that the railway station along Keppel Road, i.e. the present-day Tanjong Pagar Railway Station, was opened. Our guide for the day also told us about the Singapore Railway Transfer Ordinance of 25 Oct 1918 which authorised the sale of the Singapore railway and the associated land to the Federation of Malaya. 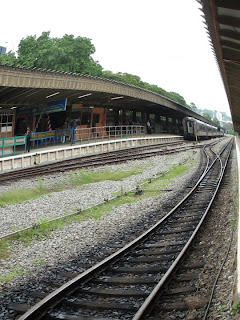 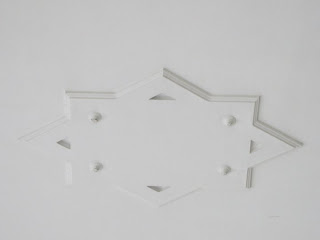 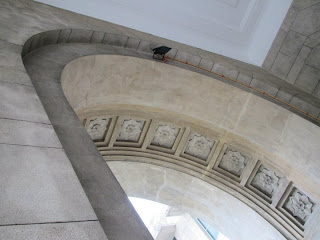 The architecture of the railway station captured my interest most of all. I learnt that the station's architectural style was influenced by Finland's Helsinki Station, and by the Art Deco style. The geometric and angular forms that are found at various parts of the railway station's design are characteristics of the Art Deco style. Our guide told us that the eight-pointed star design that we saw on the ceiling near the entrance of the station represents harmony and balance. This station was designed by Swan and MacLaren, the architectural firm which also designed the Raffles Hotel, the Victoria Memorial Hall and present-day Goodwood Park Hotel. 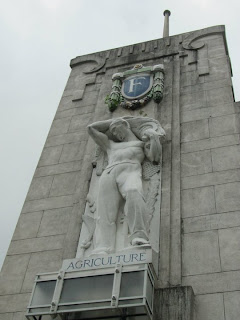 Of worthy notice are the four towering statues found at the entrance to the station. These statues were to represent the four economic pillars of Malaya: Agriculture, Commerce, Transport and Industry. These are works by Rudolfo Nolli, a Italian sculptor and architect. If any one asked what the initials "FMSR" stands for, the answer is the Federated Malay States Railway. 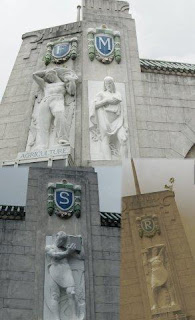 During my previous visit to the Tanjong Pagar Railway Station, I did not take sufficient notice of the mosaic inside the station (I was attracted to the high ceiling of the lobby instead). I was glad that our guide highlighted to our attention the mosaic panels in the main lobby of the station during our tour. These six groups of mosaic panels portray six of Malayan's core economic activities. If I had remembered correctly, these were tin-mining, rice-planting, rubber tapping, maritime trade, coconut-planting and agriculture. The mosaic tiles, I later learnt, were made of coloured rubber through a patented process created by the Singapore Rubber Works. Throughout the tour, I did my best to imagine how the railway station would look like in its former days of glory.


One of my fellow tour-mates highlighted to me that the ticketing counter is made of solid teak that is now painted white. The tour concluded at the departure platform. Members of the tour-group had the special permission to walk along the departure platform which was only accessible to ticket-holders on a regular day. We learnt that the Tanjong Pagar Railway Station is the only station along the Malayan Railway which has hydraulic buffer-stops. The buffer-stops were designed by Ransomes and Rapier.


After the tour, another tour mate reminded me that the there was a Station Hotel that used to operate at the Tanjong Pagar Railway Station. Perhaps it would be wonderful if the tour could bring its participants to parts of the previous Station Hotel and let us imagine what a luxurious lifestyle it would have been to have stayed in one of those rooms in the previous Station Hotel. This would have made the tour a perfect introduction to the significance of the Tanjong Pagar Railway Station.

After the tour, a few of my tour member and I continued to explore the Tanjong Pagar Railway Station and its nearby vicinity.


My words of appreciation to Yesterday.sg, I Love Museum and the Preservation of Monuments Board for the invitation to the tour. The tour has deepened my knowledge and appreciation of the Tanjong Pagar Railway Station. 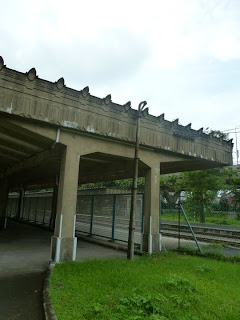 Before I end this post, here is to point you to a blog of Mr Jerome Lim's insightful collection of his memories of the Tanjong Pagar Railway Station and his journeys made from that station: http://thelongnwindingroad.wordpress.com/journeys-through-tanjong-pagar/ and here's an update to read his post on this tour: A final look at Tanjong Pagar Station. 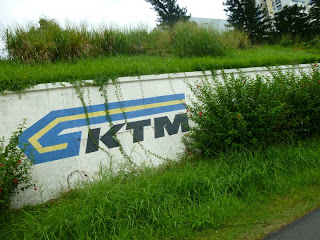 To register for one of the remaining special tours of the Tanjong Pagar Railway Station conducted by the Preservation of Monuments Board, please visit: http://www.pmb.sg/?page_id=1183.

Project 79: Share Your Story Contest! Do you have any memorable stories from the Tanjong Pagar Railway Station? Send it to us now. Share your story within 200 words, and submit it along with a photograph that best reflects the story. Entries are to be written in either English or Chinese language Top winning entry will get a chance to publish his or her photo as postcards in 10,000 copies – which will be distributed at more than 100 places in Singapore. For any further enquiries or comments. please contact Project 79 committee by email at project79.np@gmail.com or look for us at facebook page: http://www.facebook.com/#!/pages/Project-79/201689243185553