Growing up in Ang Mo Kio: My Primary School 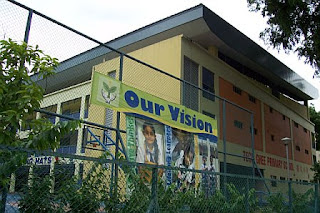 
Townsville Primary School started functioning at its former premises in Ang Mo Kio, Street 32, in 1983. The school was officially declared open on 25 July 1985 by BG Lee Hsien Loong, then the Minister of State for Defence, Trade and Industry and Member of Parliament for Teck Ghee Constituency. The school moved to its brand new premises at 3 Ang Mo Kio Avenue 10 in December 2000.

Today, I understand that Townsville Primary School has established itself as one of the better Primary schools in the Ang Mo Kio neighbourhood.

The former school building of Townsville Primary School that I had once studied in no longer exist now. I can still remember the quadrangle of the former school building. To some extent, I felt it was like a white elephant most of the time. While it allowed for ventilation, the quadrangle was usually not my favourite place to be at since it was either too hot due to the tropical sun or too wet due to seasonal rain. However, strangely, I missed it after I had graduated from my Primary School partly because my Secondary School compounds had no quadrangle.

By the way, there was a distinguished visitor, Her Majesty Queen Elizabeth II, who had visited Townsville Primary School in the year 1989. I was one of those students who had to go through a few rehearsals to prepare for the visit of our very distinguished guests. My role, like many of my fellow schoolmates, was to line at specified location of the school and wave our hands at our distinguished visitor when she walked past us.

Today, the school building that Her Majesty Queen Elizabeth II visited no longer exist, but the school's motto "Do Out Best" remains unchanged. There were a number of changes though. For example, other than the change in the location of Townsville Primary School, the school song that is now being sung by current students of Townsville Primary School is different from the one that I had sang when I was just a student of the school.

While I don't have any emotional attachment to the new school building, at the very least, I can still remember the name of my Primary School. 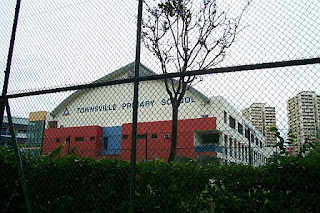 Is your Primary School still in the same location that you had once studied in?

I heard that Nanyang Primary School's old campus at Coronation Drive is the campus that has been owned by any primary school in SG for the longest time. I think it's being used for Nanyang Kindergarten now.