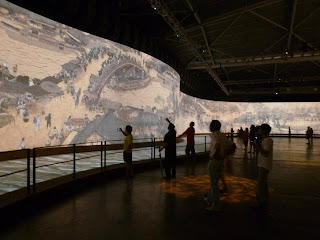 Bianjing (汴京), otherwise known as the capital city of Bian, was the capital of the Northern Song dynasty. Today, this place is named Kaifeng, and is located in east-central Henan province.

For anyone who is interested to get a dynamic and animated glimpse of Bianjing during the Northern Song dynasty the Moving Masterpiece: The Song Dynasty As Living Art exhibition is worth making time for.


This exhibition is also for everyone who had missed the animated version of "Qing Ming Shang He Tu" (Along the river during the Qingming Festival) (清明上河图) by the famous twelfth century Chinese painter, Zhang Zeduan, during the World Expo 2010 Shanghai, when it was first publicly exhibited at the China Pavilion. "Qing Ming Shang He Tu" is a painting that was painted on a hand scroll. It presented the lifestyle of various classes of the society as well as the different economic activities in the rural area and the city.

The exhibition can be divided into three sections, namely the Pre-show hall, the main hall and the Post-show hall. In the Pre-show hall, visitors can see objects and replicas related to the Song dynasty. There are a number of interactive elements at the Pre-show hall. One of these was that of seeing multiple image of oneself transposed on the image of a section of "Qing Ming Shang He Tu" (animated version).

To help the visitors better appreciate the animated version of "Qing Ming Shang He Tu", there is free rental of audio guides that comes with every admission. The audio guide provides commentaries in seven different languages, including Mandarin and English.


One of the interesting parts about the exhibition is that city of Bianjing will be presented in both daytime and night-time scenes in the animated painting of "Qing Ming Shang He Tu". I learnt that the ship-building industry was of a fairly large scale during the Song dynasty.


Interestingly, in the painting, the city of Bianjing did not have walls surrounding it. I learnt from the audio guide that this could indicate that the painting was depicting a peaceful and prosperous time in the Song dynasty.

History came alive at this exhibition. I could imagine how excited one may be seeing Zhang Zeduan's masterpiece coming alive in the form of animation. I have also learnt that in those days, it is fairly easy to infer one's social status merely by the mode of transport used by a person. The not-so-well-do people would generally travel on foot. The very rich ones would travel on sedans carried by people.

If you are finding yourself interested in this exhibition, please make some time to visit The Moving Masterpiece: The Song Dynasty As Living Art. Till 6 Feb 2012, right here in Singapore. 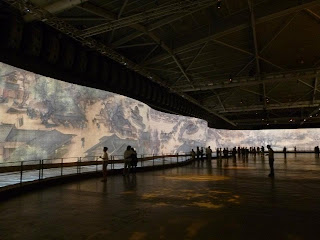