This is one of the most elaborate clanhouse in Southeast Asia. Located at Lebuh Cannon, its massive tiled roof embellished with porcelain dragons and other symbols is reputed to weigh 25 tons.

Khoo Kongsi is a clanhouse for Chinese with the same surname (Khoo), and it is one of Penang's oldest and grandest clan temple. The roofs, pillars and walls of the clanhouse are intricately decorated, and are fine examples of traditional Chinese architecture and craftsmanship.

At the Khoo Kongsi, one can also find four panels of stone on which the anthology of the 24 stories of filial piety were carved. 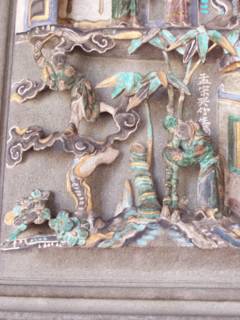 One of the 24 Stories of Filial Piety. It's titled "Bamboo shoots in winter form Meng". This is carved on one of the four panels of stone found in Khoo Kongsi.

The story goes as such: Meng Tsung (3rd century) of the Three Kingdoms had to support his ailing mothre from a young age after the early demise of his father.

During one bitter winter, his mother fell seriously ill and could not eat anything except bamboo shoots. Yet, it was impossible to find any bamboo shoots growing in the snow during winter.

Meng Tsung was filled with despair as he hugged a frozen bamboo in the bamboo grove and cried. His tears touched the elements of nature and suddenly, the frozen ground cracked open and from the crack, bamboo shoots began to grow before his very eyes.

Pleasantly surprised, Meng Tsung quickly cut them and brought them home to cook for his mother. After taking the bamboo shoots, his mother recovered from her illness.