Back to the ancient world, miscellaneous

After writing Part I and Part II of this series, I still have an urge to write a bit about the Raw Dragon Bones. As such, here's a post of the miscellaneous other things that I have experienced at the exhibition: DINOSAURS. 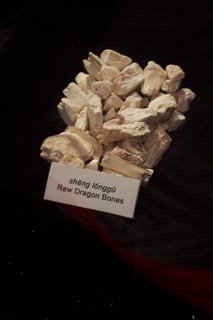 I have heard about the Traditional Chinese Medicine having this item called Longgu (Dragon bones). I used to wonder how these dragon bones were derived from.

The answer was being revealed at the exhibition. Chinese legends believe that dragons lived under the surface of the Earth. As such, what were actually fossilised bones of prehistoric animals, were thought to be dragon bones and dragon teeth.

For the Chemistry-inclined people, the main components of dragon bones are Calcium Carbonate and Calcium Phosphate.

After having seen Dragon bones at the exhibition, I am beginning to suspect that the Chinese's depiction of the dragon could have been inspired by some Chinese folks coming across with fossils of dinosaurs by chance? Maybe this was only my imagination?

***
At the exhibition, I also saw fossils of plants. In understanding dinosaurs, it seems vital to also understand the plants that had exist during the times of the dinosaurs. The fossils of these plants appear to lend insight to the kind of environment that the dinosaurs had lived in million years ago.

I learnt from one of the documentary shows that was being shown at the exhibition that there was no grass at the time when dinosaurs roamed the Earth.

If there were no grass, what conditions could have made it favourable for the large dinosaurs to thrive in those days?

***
For those of you who would like to browse for more information regarding dinosaurs, I found out that bbc.co.uk has some interesting articles on dinosaurs. Check this out: http://www.bbc.co.uk/sn/prehistoric_life/dinosaurs/

And here's a site on Sue: http://www.fieldmuseum.org/sue/