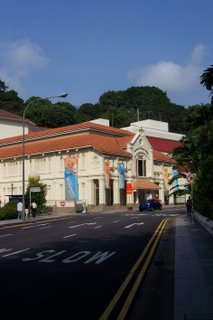 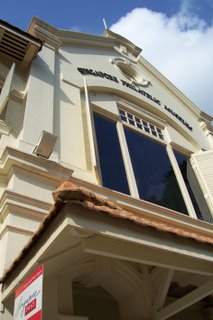 I am very glad that I have decided to wake up early on a Sunday morning to visit the Singapore Philatelic Museum and be onboard the World War II Civic District Trail. I have had an enriching tour onboard this walking tour, and most important, I have learnt a little more about the history of Singapore.

I had previously been to the Singapore Philatelic Museum for a few times, but it was only after I attended the WWII Civic District Trail did I better appreciate that stamps can lend us a lot of insights to our history and heritage.

The tour started in a gallery that housed the exhibition titled The End...The Beginning. It seemed appropriate that the WWII Civic District Trail began with stamps. The docent gave each of us the stamps that you see below: 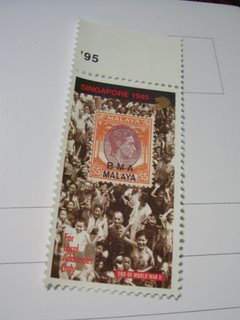 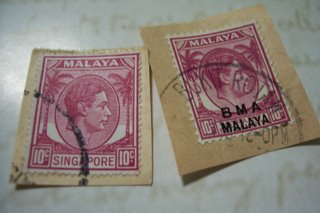 The docent then began to relate to us accounts that made me start to realise that if one diligently does research on each and every stamp, one can actually uncover a whole load of history and information about a place.

Do you noticed the word "BMA" on two of the above stamps? BMA stands for British Military Administration. After the surrender of the Japanese, Singapore was temporarily administered by the British Military Administration. The docent also shared with us about the stamps that were used during the Japanese Occupation and I was fascinated by the fact that I was learning something new!

By the way, on this tour, I have learnt that the building that now houses the Singapore Philatelic Museum was the formerly part of the Anglo Chinese School. Check this link for information about the museum and its architectural history: http://www.spm.org.sg/museum/index.html

The Philatelic Museum has such a long history indeed. I have a feeling that the design of the post-box that stands outside this museum can be traced way back to a time before I was born. 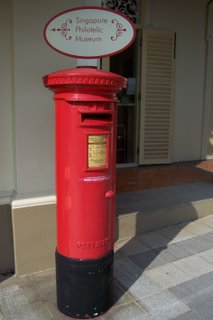 After spending some time hearing about World War II at the gallery of the museum, we headed for Fort Canning Park. While we did not get up close to the Battle Box, this part of the tour was just as good as a visit to the Battle Box. The docent gave us accounts of factors that could have contributed to the British surrender. One part that was new to me was the significance of Lieutenant–General Percival's request to the Japanese after the British had surrendered. He had requested for the Japanese troops to only march into the city after day-break the next day. Upon much reflection, there was much wisdom in this request, wasn't it?

The next stop was somewhere opposite the National Museum of Singapore. I particularly enjoyed the walk from Fort Canning Park to the next stop. The reason? There were many trees along the way that had provided shade on a very sunny Sunday morning. 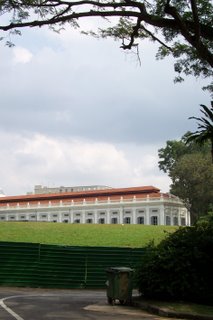 Did you see a patch of green land on the photo above? It triggered a sense of nostalgia in me. A few years ago on this patch of green land stood a library which I had used to spend about an hour every fornight in. And now, that library has made way for what you see right below: 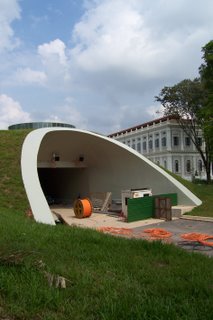 A tunnel for vehicles. 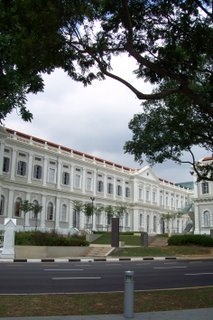 At the spot opposite the National Museum of Singapore and at a spot nearby the Singapore Management University, our docent shared with us about the Kempeitai, and some anecdotes that had happened during the Japanese Occupation.

Before attending this trail, I did not know that the original statue of Sir Stamford Raffles was kept in the National Museum of Singapore during the Japanese Occupation. Now I do.

A few other things on this trail had caught my interest. During this trail, the docent showed us a photograph of the old YMCA building. I also got to see a photograph of the building that now houses the Rendezvous Hotel. While I could recognise the building, the present building does not look exactly like how it did in the past. Perhaps change is the only thing that is constant in life? 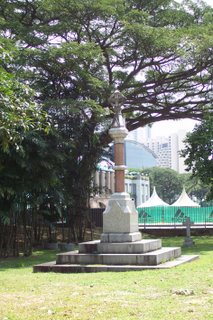 Finally, we had reached the City Hall. This was the place where the formal signing of the surrender instrument by the Japanese was held on September 12, 1945. 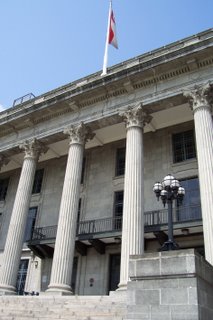 Overall, the WWII Civic District Trail has been very informative and enriching. It reminded me that history has many lessons to teach us. Maybe it is time for us to find time to learn from history?

Special thanks to the docent, Jimmy, for a most delightful walking tour that day.

By the way, Tym has also blogged about this very WWII Civic District Trail. Do check it out: http://yesterday.sg/detail/world_war_2_in_the_city/

**
If you have missed the above trail and are keen for heritage-related activities this few months, please check out http://www.yesterday.sg/explore/museum_events.html

Heh .. how come they didn't bring you to see the ROM. Historically important place for the oldies; more important for the young ones.

Hi Chun See, I think the trail didn't bring me to see the ROM since I figured it was not directly related to the World War II?

Beautiful post about the Civic District. I always feel that there is just so much potential in this historically significant and architecturally beautiful part of Singapore. As Singapore progresses forward with state-of-the-art mega-complexes, I hope that our people do not ever forget the things of beauty which reflect on our legacy here.