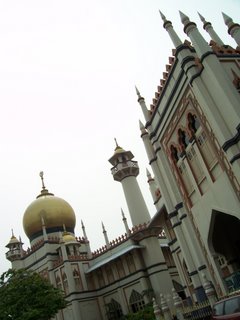 I travelled to Sultan Mosque yesterday to view the SB2006 exhibits at that site. The Sultan Mosque has a rich history and I urge that readers take some time to read about it: http://www.singaporebiennale.org/venues-sultanmosque.html

At Sultan Mosque, the exhibits for the Singapore Biennale 2006 are found at the basement, the third level and the roof-top of the Annex building. As I walked up to the roof-top, I found myself fascinated with the designs of the building. 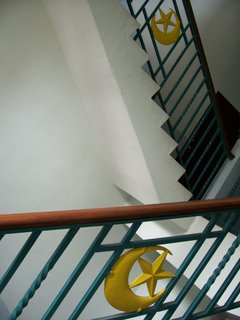 I like the simple yet dignified design of the stairway. 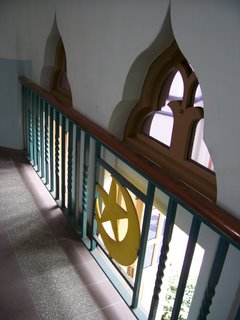 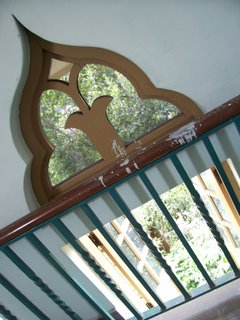 I was attracted to the designs of the window-frames.

On the roof-top, I saw some interesting views. I could not help but capture these using my camera. 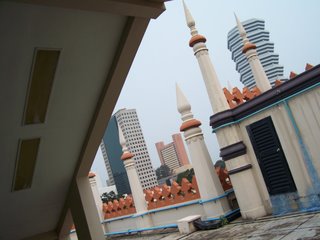 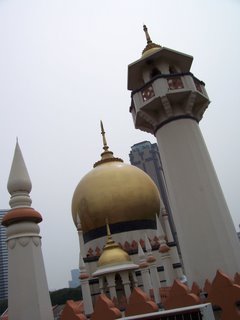 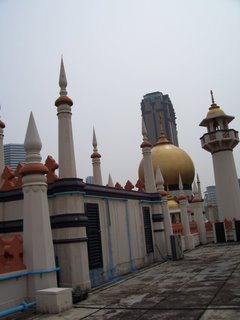 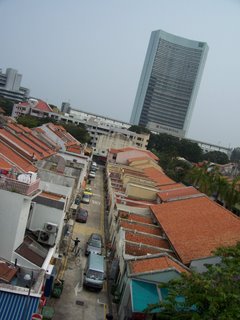 Kampong Glam. This is for Kunstemaecker. The white building in the background is the hotel that he had stayed in when he was here last December. 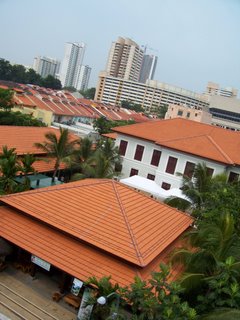 Aerial view of the Malay Heritage Centre, and more of Kampong Glam.

I particularly like Qureshi's Wuzu 2 and the ingenious way that Qureshi has marked the walls and floors (see below). 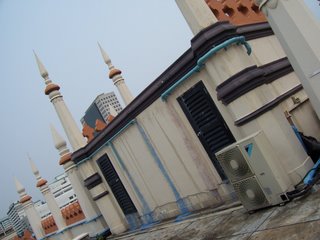 On the third level, the visitor would be treated with Abdul Aziz's Ten Triangles. I like the way that she uses her background in Mathematics and Science as her main source of inspirations for her works. Ten Triangles employs an organised geometrical system that I have yet to understand. What I can say for sure is that the work itself looks pleasing and balanced.

At the basement, one can find Jennifer Wen, Ma's Alms and Qureshi's Wuzu 1. 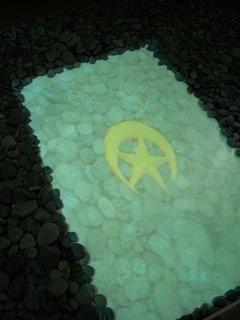 I can say that the Sultan Mosque is quite a good choice of venue to house the exhibits displayed there. As I viewed the exhibits, I cannot help but to think about how geometry influences Islamic art, and how the Islamic religion and culture have guide the lives of its followers. It struck me that our beliefs have strong influences on our behaviours, and that they shape the way we perceive the world.

After visiting the SB2006 site at Sultan Mosque, I walked about to enjoy the beauty of the Kampong Glam area. 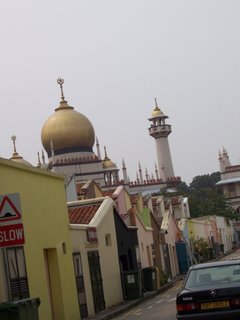 Sultan Mosque is such a prominent building in the Kampong area that I can see it visbibly while I was walking along one of the back lanes.


Other than the familiar Orchard Road (not that I go there often),
I suppose that there are still many parts of Singapore worth exploring.

thank you so much for the picture. I had no idea the building stood that tall.

I can always rely on you to refresh my memory of Singapore. :)