At the National Library of Singapore: Lim Boon Keng: A Life to Remember 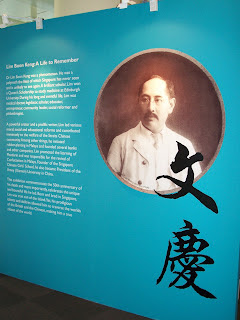 A few weeks ago, I was at the National Library of Singapore, and visited the exhibition: Lim Boon Keng: A Life to Remember.

This exhibition held in conjunction with the launch of the reprint of Dr Lim's seminal work, The Chinese Crisis from Within, commemorates the 50th anniversary of Dr Lim's death in January 1957. 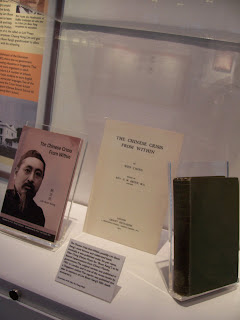 To be honest, I have never read Dr Lim's book The Chinese Crisis from Within. I have only read briefly about Lim Boon Keng from my secondary school history textbooks. I suppose he must have contributed a great deal to the society because I know that there is a road that is named after him.

At the exhibition, I was impressed to find out that not only was Dr Lim Boon Keng a medical doctor by training, he was a legislator, scholar, educator, entrepreneur, community leader, social reformer and philanthropist.

Visitors to the exhibition can expect to learn about the early life of Lim Boon Keng. Born on 18 Oct 1869, Lim Boon Keng was a Straits-born Chinese. Life was not a bed of roses for Lim Boon Keng. When Lim Boon Keng was about 12 years old, his father, who was the sole-breadwinner of the family passed away. In normal circumstances in those days, one could imagine that Lim Boon Keng would have to leave school and help support his family, but thanks to the intervention of RW Hullett, he need not have to do so. Who's RW Hullet? You can find out a little more about him at the exhibition. I suppose behind every successful talent is someone who is wise enough recognise and give support to the talented person.

I also found out that Lim Boon Keng had written several other publications. He had even completed an English translation of the poem Li Sao by the poet Qu Yuan. It impresses me that Lim Boon Keng could set aside time to contribute to the academic and literary world despite him having so many other roles to play. 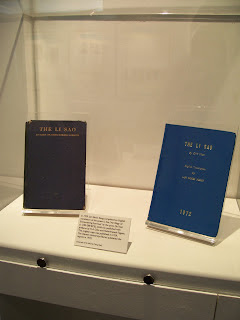 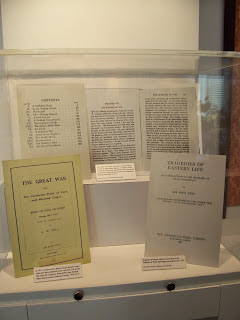 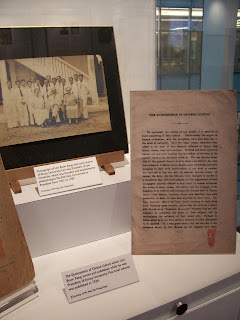 Visitors can also look forward to learn about the contributions that Lim Boon Keng has made as a legislator, a political reformer, a social reformer, an entrepreneur and more at the exhibition.

In his efforts to persuade fellow Chinese to give up the bad habit of smoking habit, I learnt that Lim Boon Keng gave a series of public lectures between 1893 to 1895 so as to campaign against opium smoking. In 1906, together with his future brother-in-law, Dr Yin Suat Chuan, Lim Boon Keng founded the Anti-Opium Society and opened an opium refuge centre that offered free treatment for the opium addicts.

I would think that his battle against opium smoking would be a very tough one during those times. One must bear in mind that the government then would have a stake in the opium trade as it is a source of revenue for the government in those days. The opium trade fetched such profitable returns that from 1898 to 1906, the average annual revenue from opium was 49% of the total income (view source). Basically, anyone fighting against the cause might be mistakenly seen as trying to reduce the government's revenue. Furthermore, in those days, the opium trade has the support of the then government.

Lim Boon Keng was also concerned about the education for young girls. From the exhibition panel right below, one can learn that Lim Boon Keng, together with Song Ong Siang and others, started the first English school exclusively for Chinese girls. Interestingly for me, the school that was set up in 1899 was located at Hill Street, right where the Central Fire Station is located today. 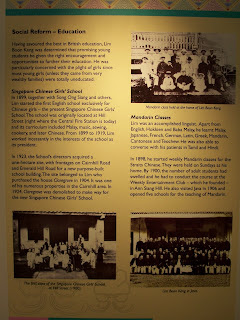 There is a lot of information about the life of Lim Boon Keng that can be found at the exhibition. I recommend that visitors set enough time aside to read and reflect upon the various materials. What you get to see on this post are just merely a fraction of the exhibition. 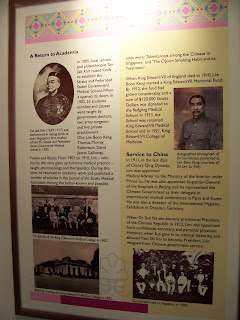 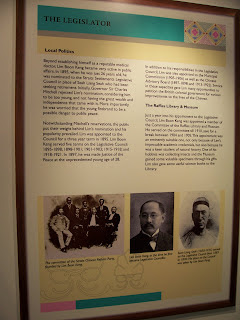 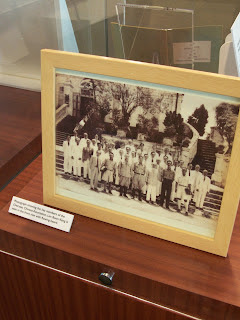 In all, I felt inspired by Lim Boon Keng's zest for learning, and his passion in advocating for the causes that he believes in.

Do check out this exhibition. Admission is free.

**
Information on the exhibition

The exhibition, Lim Boon Keng: A Life to Remember will be held at the National Library of Singapore, 100 Victoria Street, from 24 January - 18 March 2007, at Level 9 Promenade.

According to a source, there will be free guided tours available at 2 pm, from Mondays to Fridays.

Footnote: The post is written specially for my friend, Mystic. I think she might be interested in learning about the life of Lim Boon Keng and his various contributions to the society.
Posted by oceanskies79 at 3/04/2007 10:01:00 am

hi! how r u getting on? im jojo frm m'sia. im now enjoying my holiday in Pangkor Laut. it is gratifying 2 c ur photos n description accidentally abt lim boon keng - a life to remember.

In fact, im a post-graduate, taking chinese studies since 2 months ago. my thesis: the thoughts and deeds of lim boon keng and khoo seok wan during Qing dynasty.

of course, i missed d exhibition. thus, thanks much 4 ur sharing. may u b well n happy.

Jojo: Hi, thanks for visiting. All the best in your thesis preparation. I think you may enquire with National Libray Board to get more information on Lim Boon Keng.