Tour of the National Stadium 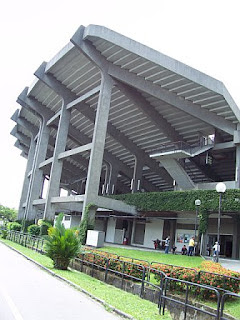 The National Stadium (Singapore) will soon be torn down to make way for a new Sports Hub. A series of commemorative events have been organised by the Singapore Sports Council. Do click on this link for more information about the commemorative events.

For those of you who have pleasant memories of the National Stadium and who would like to visit it before its official closing ceremony (on 30 Jun 2007), you may be pleased to know that the Singapore Sports Council has organised Stadium Tours to allow the public "to view the National Stadium for the last time and relive some of the old memories".

For query and tour bookings, please call at Tel: (+65) 63409517 or email at ssc_sports_museum@ssc.gov.sg
For more information, please click here.

If you would like to catch some glimpses of the tour, please read on.

**
On 5 May 2007, one of my good friends and I met to go for one of the Stadium Tours. Before the tour, we stopped by at the nearby Mac Donalds fast food restaurant for a quick breakfast. 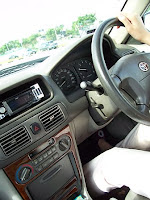 My kind friend went the extra mile to drive me from my home to the National Stadium. 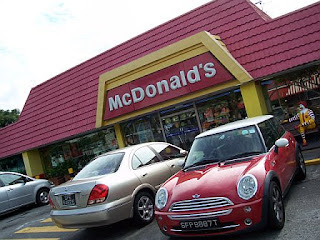 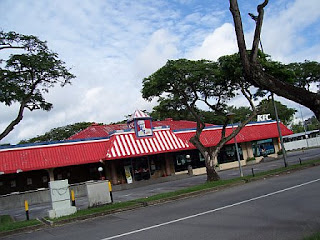 I could not help but take a photo of the nearby KFC fast-food restaurant. It has been there for quite a while as best as I remember.

**
After breakfast, we headed for the National Stadium. The meeting point of the tour was outside the Sports Museum. We walked up the flights of stairs of the Stadium's West Entrance before we reached the entrance of the Sports Museum. By 10 a.m., there was already quite a number of visitors waiting to go onboard the Stadium Tours. I believe that there were enough visitors to form more than two tour groups. At least I know that Cool Insider, Modcentric and acroamatic were on one of the other tours that same day. 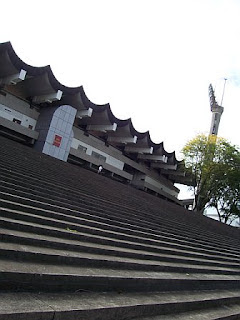 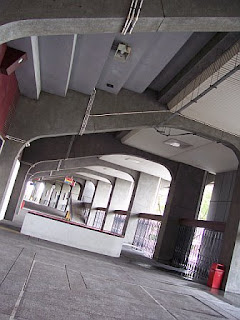 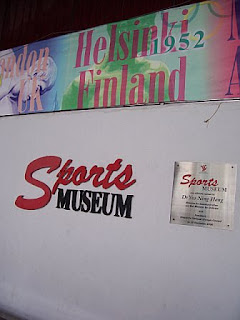 My friend and I joined the first tour group. The first stop for our tour group was the Sports Museum.

The display panel right below attracted my attention. Yours truly was one of the participants who were involved in one of the items of the Opening Ceremony of the XVII Sea Games held in Singapore in the year 1993.

That year, I have had several rehearsals at the National Stadium prior to the actual Opening Ceremony itself. The item that I performed in required me to carry a super large-size balloon and to burst that balloon so that the smaller balloons in it would be released up in the air. On the actual day itself, it was a close shave for me that I managed to make the large-size balloon burst within the given time-frame. It was no easy feat to burst the balloon since it had pretty "thick skin". 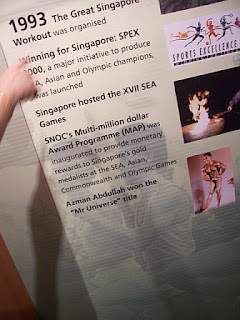 There were quite a lot of things to see at the Sports Museum, but due to time constraints, the tour group only spent less than half-an-hour there. 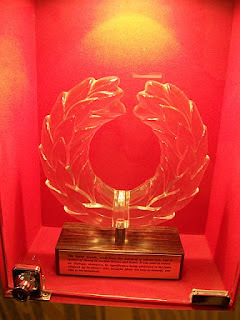 A trophy that I saw at the SSC Hall of Fame section. 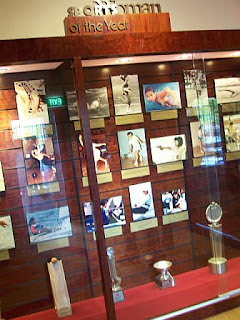 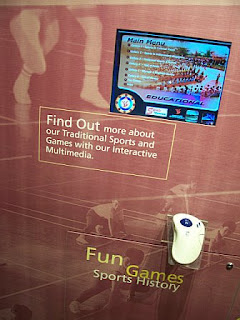 Yesterday.sg has some interesting posts on the Sports Museum. If you are keen, here are the links for your convenience:
Seeing the National Stadium inside out
Royal Sporting Heroes
Giving a fresh spin to our legacies At the grand stand.
After visiting the Sports Museum, our tour group were led to the grand stand. I realised that maintenance of the National Stadium had stepped down. Maybe it is because the Stadium is closing soon?

Anyway, our friendly tour guide gave us insights to the history of the museum. I learnt that before the National Stadium was built, the land that it now sits on used to be a swamp. We were also told that even the speakers were state-of-the-art facilities at the time when the National Stadium just opened.

At the grand stand, a sports personality also shared with us his memories of the National Stadium. 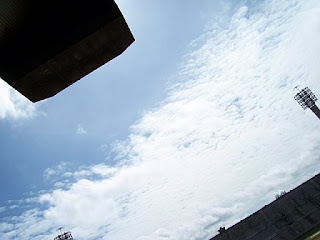 Top left: One of the speakers. 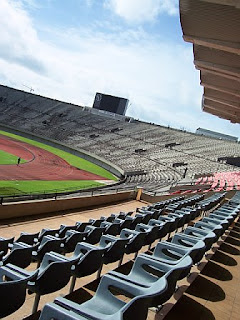 Seats for the VIPs. 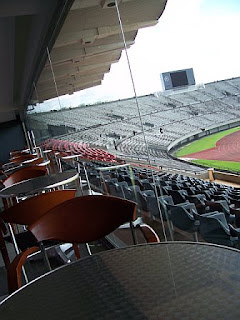 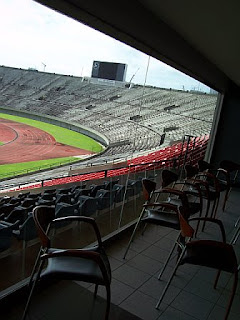 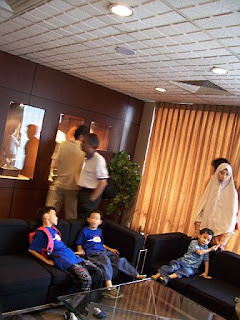 We even had pleasure to move up to a part of the grand stand where access was previously restricted only to the media and staff members of the stadium. 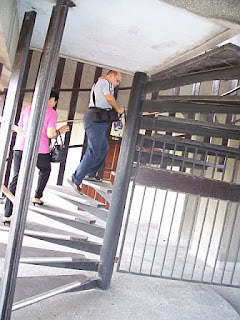 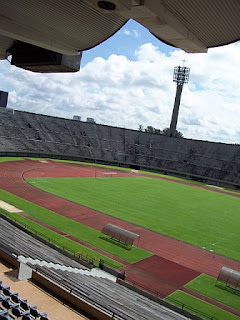 **
After the stadium, we headed for the cauldron. Along the way, I realised that I have a liking for the concrete looking structures of the National Stadium. Perhaps it is because during the past rehearsals of XVII Sea Games (back in year 1993), those concrete spaces were where me and the other performers had to wait at, before our item. 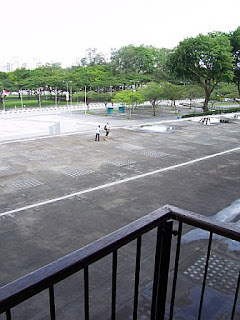 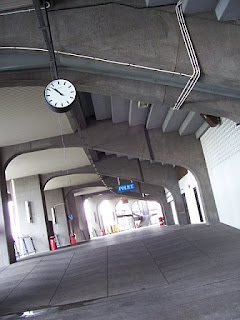 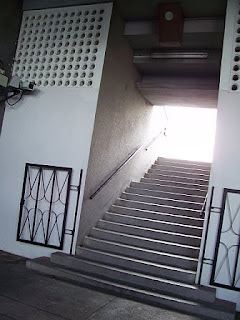 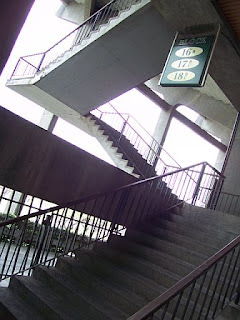 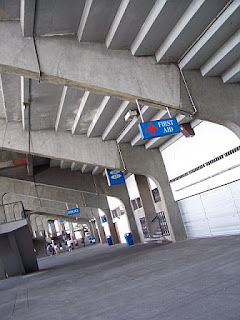 **
On this tour, I found out that Singapore first civil airport used to be in the Kallang area. If you would like to know about it, please stay tune for more of the tour.

The next and final episode: Tour of the National Stadium, Part 2

Email ThisBlogThis!Share to TwitterShare to FacebookShare to Pinterest
Labels: Singapore

do they allow you move freely to take photos? Or they expect you to follow the tour group strictly?

Ah 9: When I was on the tour, I was not told of any restriction where taking photos is concerned. I suppose out of respect of the users of the Stadium, I would suggest that you use your discretion, especially when taking photos at the Sports Medicine and Research Centre.

The tour guide allowed us to walk about freely on our own after the tour. It was quite free-and-easy.

Hey thanks for the info!

Was surprised u left a note at my fren's tagboard, u know him too? =)

Ah 9: Hi, you are welcome. I actually don't know your friend. I had thought that the tagboard was shared between you and your friend, so I left the message there. In case you were too busy to check here for my reply....

Ah 9: You are welcome. Enjoy the tour.