A visit to the Thow Kwang Dragon Kiln Firing event 2011 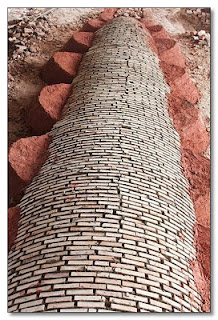 Image credit: Carolyn Lim
Did you know that somewhere in this urban island, lie one of the last two surviving dragon kilns in Singapore? Would this rare surviving dragon kiln survive in a rapidly changing world where at times heritage from the past disappear in the name of progress?

I learnt that it was a rare occasion that the Thow Kwang Dragon Kiln would fire the entire kiln from 25 - 27 Feb 2011. This was possibly the first time since the 1980s that the entire kiln was fired. In conjunction with the firing event, Thow Kwang Pottery Jungle organised a guided tour for visitors who are keen to learn a bit more about the dragon kiln. 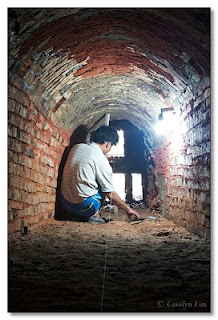 Image credit: Carolyn Lim
The dragon kiln was located at Thow Kwang Industry Pte Ltd, 85 Lorong Tawas (off Jalan Bahar). I did not drive and had to rely on public transport to get to the dragon kiln for the first time in my life. The nearest MRT station, I have concluded, was Boon Lay MRT station. I decided to take a taxi from Boon Lay MRT station as I wanted to be punctual for the guided tour that would start at 8 p.m. The driver of the first taxi that I had flagged declined to take me there on the grounds that he did not know where it is. Thankfully, the driver of the second taxi was willing to find out how to get to the Thow Kwang Dragon Kiln. After figuring his way there, he shared with me that I could, in future, tell taxi driver that I want to go to the part off Jalan Bahar where there is a giant-sized vase. That would be approximately near the mouth of Lorong Tawas.

When I reached the Thow Kwang Pottery Jungle, I was welcome by a source of bright light and warm heat from the mouth of dragon kiln. It was a source of light that one could simply not miss. I saw a lady who diligently placed wood pieces into the mouth of the dragon kiln. I felt a sense of respect for the people behind the Thow Kwang Pottery Jungle who have taken the time and effort to keep the dragon kiln and the traditional art of wood firing alive. 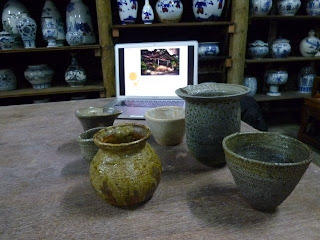 At 8 p.m., one of the Thow Kwang Clay Artists, Carolyn, gave visitors an educational presentation about the dragon firing and the process of wood firing. I learnt that many decades ago, there were several other dragon kilns in the nearby vicinity. This was because white clay, one of the raw materials for the pottery/ ceramic industry, was easily available in the vicinity.

I learnt about some of the products that used to be produced using the dragon kiln of the Thow Kwang Pottery Jungle. One of which was the latex cup that you would see right below that was used to contain latex from rubber trees of the rubber plantations. 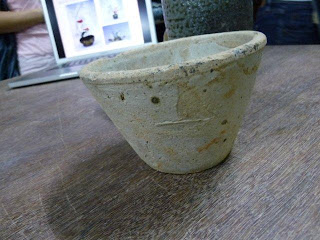 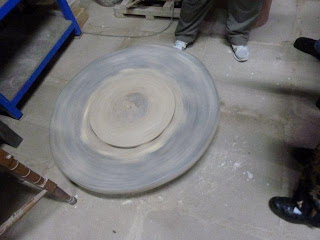 During the guided tour, our dedicated tour guide pointed me to a kicking wheel. This kicking wheel works like a throwing wheel except that one has to kick it to spin it. This requires skill. The kicking wheel was of a considerably large dimension. I was told that it was used to make large ceramics. 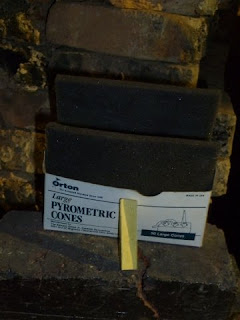 During the tour, I was also introduced to the Pyrometric Cones. These were used to gauge the temperature during the firing of the kiln. "The cones, often used in sets of three, are positioned in a kiln with the wares to be fired. These cones provide a visual indication of when the wares have reached a required state of maturity, a combination of time and temperature." 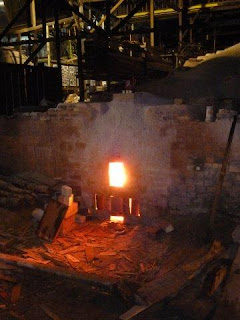 During my visit to the Thow Kwang Dragon Kiln firing event, I also learnt that during the woodfiring, salt are thrown into the kiln through the "stoke-holes". As best as I understand, the stock-holes are openings that the kiln operator could use during firing for observation and for the feeding of wood fuel. When salt is thrown into the stoke-holes, the high temperature of the kiln causes some form of chemical changes in the salt and the constituents of the salt could eventually coat themselves as a form of glaze onto some of the ceramics.

I had the privilege to see members who have organised the firing event wrap sea-salt using newspapers. I was told that when the salt is wrapped into newspapers, it makes it easier for a considerable quantity of salt to be thrown into the kiln at any one time. 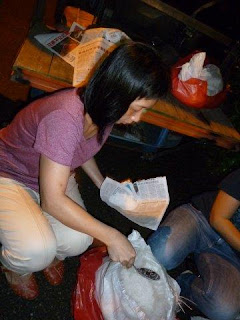 One question that has bugged me since the day that I visited the dragon kiln was: Decades later, would people in Singapore still be able to have the privilege to see a dragon kiln in action?

I learnt that the very piece of land on which Thow Kwang Dragon Kiln sits is on lease from the government. No one exactly knows what its fate would be in decades to come. Like some of the gun positions that used to sit in Labrador Park, would the dragon kiln face destruction and removal because the key decision-makers in the authorities fail to recognise its significance? Already, there seem to be plans by the authorities to recall the parts of the area where the beautiful banyan trees sit.

Then again, I am reminded of the heart-warming story of how The Rocks in historic Sydney was preserved for generations to come, thanks to a proactive community who had rallied against the demolition of the original structures at The Rocks. Perhaps the dragon kiln could survive, if there is enough people to support it to continue to exist. A good local example was Chek Jawa which was facing reclamation in 2001 but thanks to petitions from volunteers, the authorities agreed to leave the Chek Jawa area untouched for the subsequent ten years.

While I cannot consider myself a ceramics enthuasiast nor an active user of any kiln (except that I had used an electronic kiln to fire some ceramics when I was a teenager learning art), I hope that the traditional art of woodfiring and the only operating dragon kiln in Singapore would continue to thrive for generations to come. Perhaps somewhere down in history, someone may benefit from this very art that could survive against all the odds. 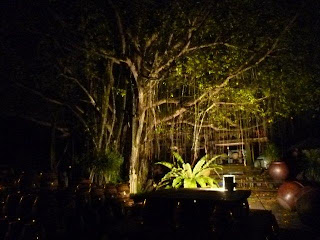 As such, I shall end this post with a photograph of a Banyan tree that sits just at the entrance to Thow Kwang Pottery Jungle. I hope that I could still see this very tree standing tall and strong many years later.

How to get there by public transport:
Take MRT to Boon Lay Station. Take bus service 199 at the bus interchange. Alight the bus stop after the PIE flyover along Jalan Bahar, just before the turn to Nanyang Avenue (NTU). You can see a road on the left side with huge pots at the corner before the bus stop. Walk towards that road.It will be a 10 minute walk into Thow Kwang.

My wife and I were visiting Singapore and came to the dragon kiln firing with him that evening. It was a very unique experience and like you say "let us hope the government does not sweep away this awesome and unique kiln by not recognising the treasure that is on it's doorstep".

py, there are actually two dragon kilns in the lorong tawas area. i blogged about the two kilns here

JollyGreenP: It was a pleasure to meet you and your wife that evening. :)
I hope people appreciate the value of the kiln and lobby for it to continue to exist.

Yg: Thank you for the link. I was trying to figure out where the second kiln in Lorong Tawas area is located. Your information helps a lot.

Next thing, please help correct me if I am wrong, I was under the impression that Thow Kwang dragon kiln is currently the only dragon kiln in Singapore where wood-wiring still takes place (from time to time)?

py, i do not know how much has changed at the other kiln since my last visit. it seemed they also use wood for firing and they fire more often than thow kwang's.

yg: Thanks a lot for the information.

Raman, you may call to enquire:

Please check if there will be any upcoming firing event when you call.