Did you know that by the ninth century, there was a flourishing maritime trade between the then Tang dynasty and the Arab world? This maritime trade has probably inspired the story of Sinbad the Sailor from the One Thousand and One Nights.

In this significant exhibition, Shipwrecked: Tang Treasures and Monsoon Winds, that is taking place in Singapore, visitors will see Tang dynasty artefacts recovered from a ninth-century Arab dhow. The discovery of this Arab dhow which was shipwrecked off the coast of Belitung, a small island in the Java Sea, provided the first physical proof of a maritime trade route between West Asia and China.

It was a humbling experience for myself to visit Shipwrecked: Tang Treasures and Monsoon Winds. There were a lot to learn and to understand. Here are snippets from my recent visit to the exhibition: 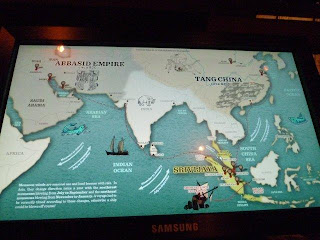 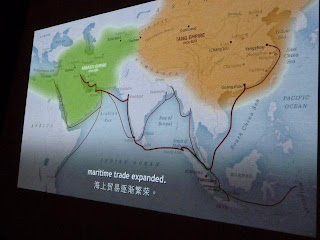 There were maps at the exhibition that suggested the possible routes that the shipwrecked Arab dhow had taken. I learnt that in the ninth century, a maritime voyage had to be correctly timed according to the directions of the monsoon winds. Otherwise, a ship could be blown off its course.

From the maps, visitors could see that the Srivijaya Empire played an important part in this maritime silk route between West Asia and China.

One of the sections of the exhibition showed a model of the Arab dhow that was shipwrecked at Belitung. 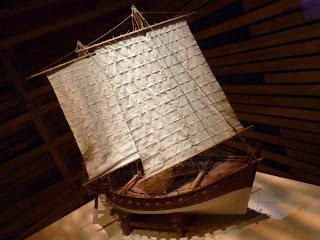 At the exhibition, I was impressed by the strategy that the people of the ninth century used to pack ceramics. The method of packing was so ingenius that most of the ceramics onboard the shipwrecked dhow have remained intact after more than ten centuries! 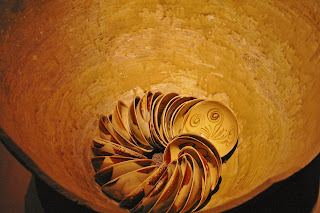 Above: I am awed by this photo taken by Belinda Tan. 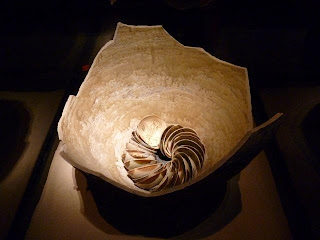 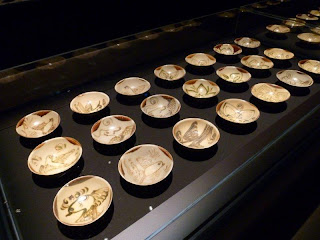 I was told that the Changsha wares that were found from the shipwrecked dhow were mass-produced from Chinese kilns of Changsha, in Hunan province. Interestingly, although almost all of these Changsha wares carry one of the few set patterns, the set patterns were hand-copied by different people onto the wares. That would mean mass production yet with each ware being sligthly different from the rest. The shipwrecked ship consisting Chinese ceramics and the cargo of an ancient shipwreck was discovered in 1998 by fishermen diving for sea cucumbers off the coast of Belitung. The above image showed how the ceramics would have looked like when they were first discovered. 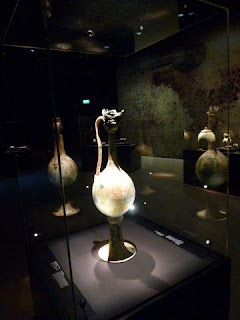 If you are visiting this exhibition, you may not wish to miss taking a look at the magnificent Green-Splashed Ewer. As seen in the image right above, this ewer stands over a metre tall. Made of white ceramic decorated with splashes of bright green, the green-splashed ewer was clearly modelled on metalwork. A fine piece of art!

There were some rare treasures in this collection. The gold cup, I was told, is the most important Tang gold object ever found outside China. According to research, it was deduced that the gold cup was most likely made in Yangzhou. The gold cup looked brilliant in real-life. 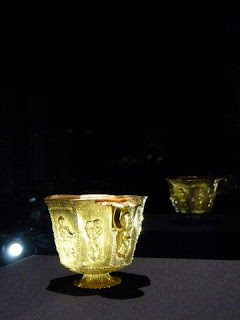 Jade Isabella has done a well-written post with excellent photographs on this exhibition. Here's a link to her post: Sponsored Event: Trip to ArtScience Museum at Marina Bay Sands on Sunday, 20 March 2011.

For the academically inclined, there is a discusion about the Belitung cargo here: Editorial: Tang Treasures, Monsoon Winds and a Storm in a Teacup.


Also see:
http://www.shipwreckedtangtreasures.com
The Silk, Sunken and Spears - Chapter Two by Urban Explorer
A day at the ArtScience Museum by Nur Shakylla Nadhra.
Posted by oceanskies79 at 4/03/2011 11:59:00 am

"The artifacts, have now been revealed to the world with the assistance of the Smithsonian Institution; and thanks to Tilman Walterfang’s ethical philosophy, the cargo was not sold off piece by piece to collectors; rather, it was kept intact as one entire collection, so that it could be studied in its original context. Walterfang kept the precious cargo in private storage for years, where they have been painstakingly desalinated, studied and carefully conserved."

You mentioned that the ticket is expensive. But you also thanked them for complimentary entry. So did you or did you not get free entry?

Ark-Royal: Thank you for your insightful comments.

23princessroad: I meant to say that the admission charges are a little more expensive compared to those of other local museums.

For this visit that I have written about, I am thankful to have gotten a complimentary entry. Thank you for clarifying.

23princessroad: Actually, even with a $30, many museum enthusiast would still find it worthwhile to visit the Art Science Museum. Afterall some experiences are prizeless.

Of course, if the admission ticket was more affordable, I would visit the Art Science Museum more frequently.

NEWS: Please also take note that the "Shipwrecked: Tang Treasures and Monsoon Winds" has been extended till 2 Oct 2011.