Back to the ancient world 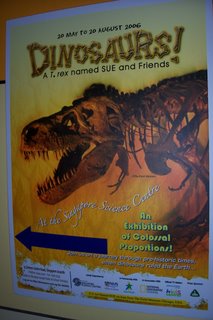 It was National Day. I decided it would be a good idea to visit the exhibition: Dinosaurs! A T. rex named SUE and Friends that day, since I had to meet someone at a locality relatively near the Singapore Science Centre in the morning.


Despite the crowd, the trip to the above-mentioned exhibition proved to be an enriching one. I felt I was being transported back in time to find out more about the ancient world. The ancient world that dates back to about 248 - 65 million years ago.


Interestingly, the exhibition also provides links to how the knowledge of the ancient past may serve use to us, even million years later. 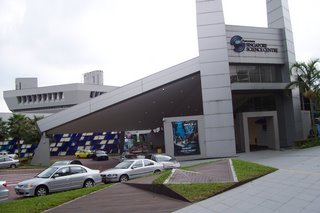 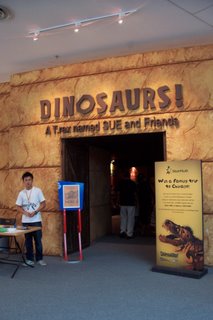 I found out that at the ticketing counter at Annex D, it is selling tickets that has the image of the T-rex printed on it. So, if you would prefer to get a ticket with the image of a T-rex printed on it (instead of the one with the logo of the Science Centre), I figured that you should not purchase your tickets at the main entrance of the Science Centre. You should purchase the tickets at Annex D.


If you are not sure where Annex D, try looking for what I call the "protruding dinosaur head" (see right below). 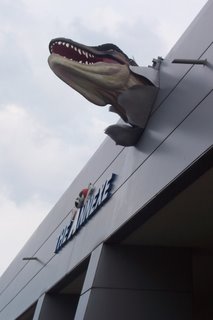 What better way to start the exhibition than to find out what exactly is a dinosaur?


"(Dinosaurs) belong to a group of reptiles called diapsids, which means they had two temporal openings in the back of their skull..."

The explanation seem to get very scientific, but it was enriching for a lay-man to be exposed to the terms. However, I don't know what a temporal opening in the back of the skull should look like. I just kept the terms and concepts at the back of my mind, hoping that those questions that I have might be answered along the way.


The first dinosaur cast that greeted me was that of the Tarbosaurus bataar. This dinosaur was a hunter, as we can induce from its ferocious looking teeth. I read that it was a lizard-hipped dinosaur. 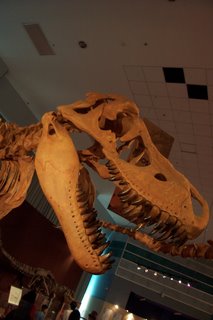 One thing that I remember after this exhibition was that in general, dinosaurs can be either lizard-hipped or bird-hipped. Or did I get this wrong?


The amusing part when I was at the exhibition was when I overheard a few children trying to debate with the adults whether the exhibits on display were real or were not. Innocence has its beauty.


Unknowingly, I seemed to have taken an interest in dinosaur-eggs. I took at least three different photos of exhibits of dinosaur-eggs. I overheard from one of the video clips shown at the exhibition that no matter how large a dinosaur was, its egg would not be bigger than the size of a football. 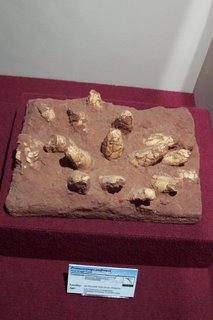 This exhibition is not just about dinosaurs. Visitors will also get to see casts of primitive reptiles, theriodonts (mammal-like reptiles?). These animals had roamed on Earth million years ago. 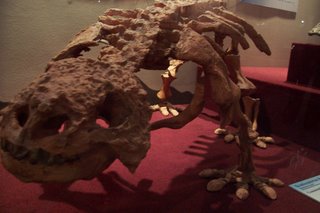 But who can ever resist viewing the star of the exhibition? Yes, the T-rex (Tyrannosaurus rex) named Sue. Almost everyone with a camera on his hand wanted to take photographs of this very exhibit. That included myself. 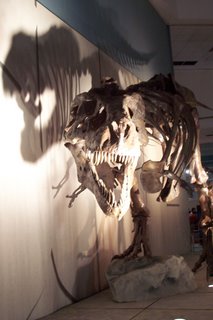 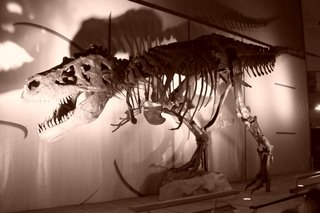 That was not all. There were exhibits that displayed replica of different specific parts of Sue (e.g. the teeth, the hips, the skull). There was an exhibit that focuses on the very good sense of smell that T-rex had. Yet an exhibit touches on how the fossils of Sue was found. There was even a section that focuses on how the technology of CT Scan has helped scientists gain better insights to T-rex and its behaviours. 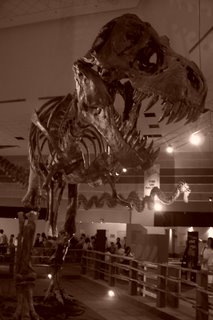 I went to catch the show The Truth about Killer Dinosuars! at the auditorium. It has been educational. I learnt how the T-rex and the Velociraptor hunt and prey for food. The interesting finding was that according to this show, Velociraptors actually had feathers. 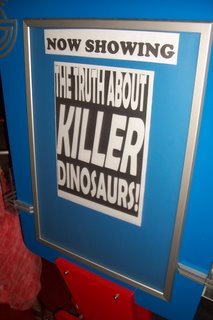 Feathers. I had associated feathers with birds. Perhaps because of this association, I was particularly intrigued with this segment of the exhibition that has a title: Birds are Dinosaurs! 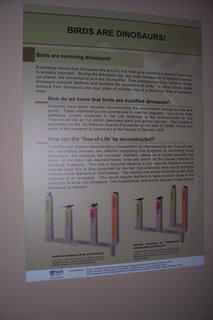 Visitors to the exhibition were even invited to identify the similarities between the skeleton of a Moa and a Velociraptor. By the way, did you realise that birds have scales on their legs? After watching The Truth about Killer Dinosuars!, I was somehow being planted with this idea that "feathers are actually highly evolved scales". Nature is so amazingly, I think. 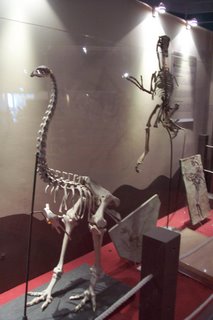 Moa and a Velociraptor 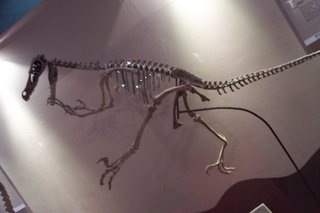 Velociraptor. Imagine it with feathers.

At the exhibition, there was a replica of a fossil of an animal that would serve to be a good example of what might have been the transitional form between the modern bird and the related dinosaurs. 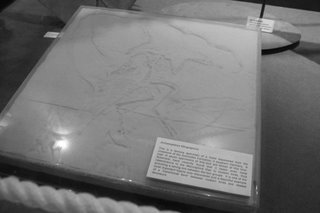 With the idea that birds are evolved from certain dinosaurs, I started looking at these bird specimens with a slightly different eye. 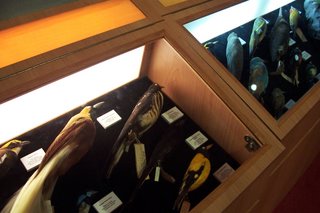 hey PY, for some reason the images aren't showing up on yesterday. know how to fix? =(

I notice the problem today.

I suspect that blogger's images don't show up well. I have previously attempted to upload photos up the Photo Gallery of Expression Engine....but it seems that my image sizes are too large for proper upload.

Is there anywhere else for me to upload photos?