Treasures of art hidden in a peaceful corner

The SB2006 site at Tangln Camp is tucked away from the hustle and bustle of city life. I felt I was being transported to a rural and peaceful environment, and I welcomed the respite that came along with it. Even though I had to take a slow 5 minutes walk from the designated bus-stop to the actual SB2006 site, I enjoyed every bit of the walk (except the part where I have to bear with the poor quality air from the recent haze). 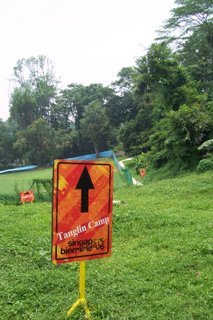 After getting down at the bus-stop, I followed the signs on the signboards to head for the SB2006 site. 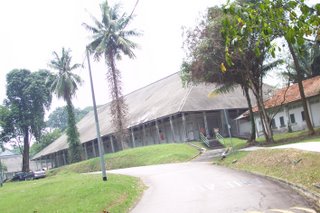 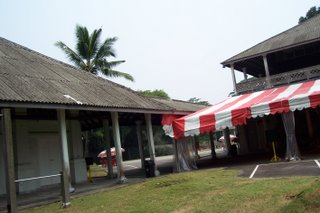 Away from the rest of the world.

I was treated to a pleasant surprise when the friendly personnel at the reception told me that admission to the site was free as it was a public holiday (Deepavali) that very day. This meant that I can save my already purchased SB2006 ticket to make yet another trip to Tanglin Camp again, if time were to permit.

I had wanted to join the guided tour but it would only start about 45 minutes later. I began to venture the various galleries on my own. 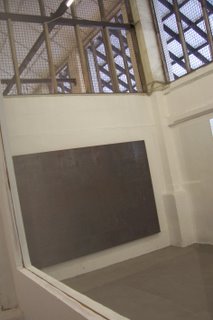 Prvacki's The Leap of Faith. Can you feel the forces that attract one to it?

The first work at Tanglin Camp that won my attention was The Leap of Faith, a mixed media installation by Prvacki. What attracted me was the concept behind the work. This artwork has the power to literally and physically attract viewers to it. How can this be possible? One part of the work comprised of a large black-coloured magnetic block held on the wall. When a viewer puts on a specially designed metallic vest, the magnetic forces literally attracts the viewer to the work. Somehow, I see parallel between the magnetic forces from the work and the gravitational pull from Earth. To some extent, gravity limits our movement but it also creates the familiar framework which we organise our movements around. But in this work, having a force that attracts the viewer from unfamiliar direction also seems to force the viewer to redefine the way he/ she moves. 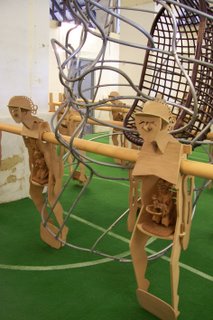 Escala
Juhasz-Alvarado's Escala (Stopover) also caught my eye. It was visually attractive to me. It is an installation that looks like a giant-sized table football game. The figurines (that seem to represent the toy "players") seem to bear images that look like African idols, while others seem to look like abstraction of Christian saints. 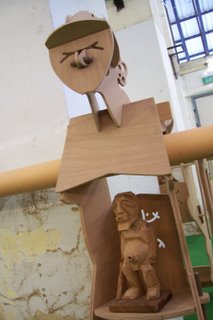 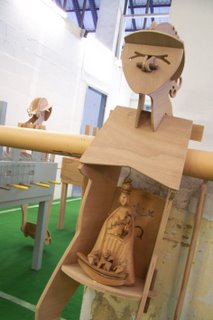 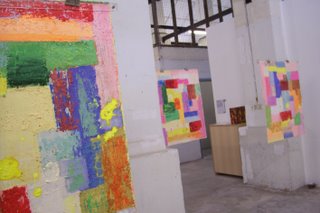 Phinthong's Dong Na Tham. This is one piece of art where the audience can contribute.

Phinthong's Dong Na Tham caught my attention as it "aims to test and raise the question of morality, spirit and social contribution" (from exhibition short guide) within the Singapore community. There is a box whereby one can make silent bids for the work. Funds raised from this method will go towards creating a small library at one of the primary schools in Southeast Thailand. How would the Singapore community respond to this work? 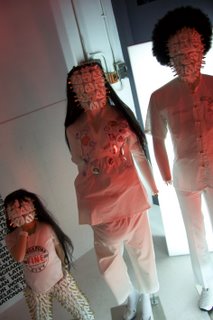 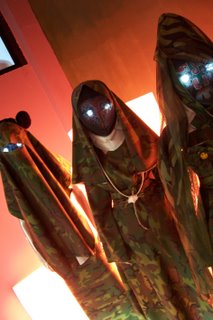 We live in a Dangerous World

I also went to check out Brian Gothong Tan's We live in a Dangerous World as I've read a positive review about it when I was reading a post by Emily regarding her visit to the Tanglin Camp. This installation by Brian Gothong Tan forced me to look at the objects that laid in front of me from perspectives that I normally don't take. This is one work that one should go and experience. It shakes one to experience things in ways different from one's norms.

When it was approaching 1.30 p.m., I headed for the meeting point to join the guided tour. My guide for that day was WH. I found some of the comments shared by the guide to be worth contemplating upon. I remember him saying that in looking at a work of art (especially a piece of contemporary art), it is helpful "to temporarily suspend one's disbelief". After thinking about it, I think the words do make sense. It does help in one's appreciation of the works if one can temporarily suspend one's disbelief when looking at works of art such as Brian Gothong Tan's We Live in a Dangerous World and many others.

Perhaps the value of art is that it seeks to present different ways of looking at life. There is no right or wrong. Art just presents the diversity of life. When one temporarily suspends one's disbelief, one can then learn to appreciate a perspective that may be an opposition to one's own. Art that challenges one to question one's very own perspective too. How intriguing, won't you think? 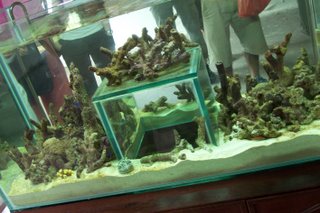 Aquarium: I feel like I am in a fishbowl.
In this work, the viewer can almost literally experience how it feels like to have his/her head in a fishtank. 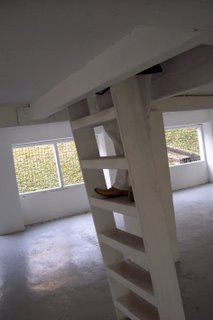 Do you know where this ladder leads one to? 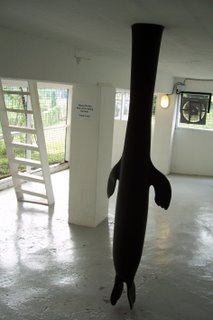 I heard that seals and penguins are the sources of inspirations for Takashi Kuribayashi's works. 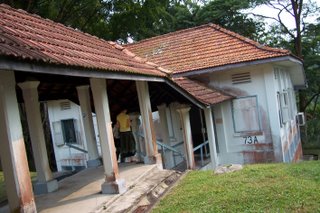 The very first stop of the guided tour was at Block 73A of Tanglin Camp. The guide shared that Block 73A housed one of his favourite works from the site. Housed at Block 73A is Takashi Kuribayashi's Aquarium: I feel like I am in a fishbowl. I marvelled when I experienced this installation. While it seemed to disorientate me to see things from an odd-perspective, it was fun and novel. This is one installation that one must check out. 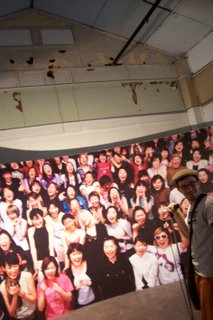 For the folks who would like to experience how it feels like to be a star on a stage, check the interactive installation STAR by Hiroyuki Matsukage. It is interesting to see how this work responds accordingly when a viewer shouts into the microphone provided. How fun!

Echo, also by Hiroyuki Matsukage is yet another thought-provoking work. According to the guide, this work seeks to portray the frustrations of being only able to echo another person's words. Imagine not being able to speak one's own voice and thoughts, and having to mirror another person's words all the time. I would think it is terribly frustrating. I was told by the guide that the title of this work is linked to a Greek mythology. 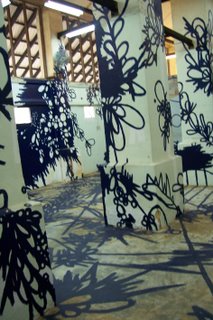 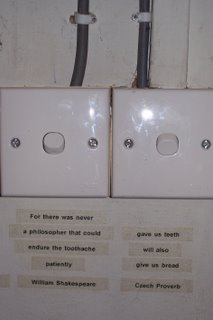 I like the concepts behind Ashok Sukumaran's Redoubt (The Old Therapeutic Institution). 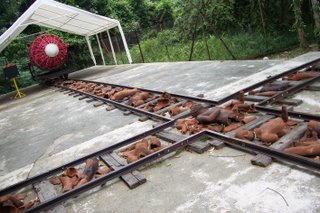 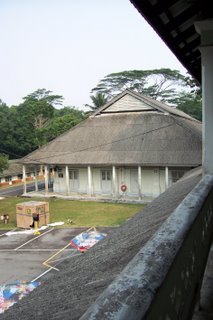 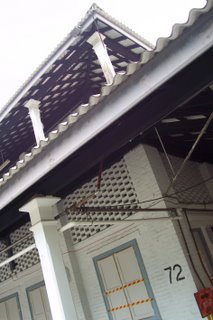 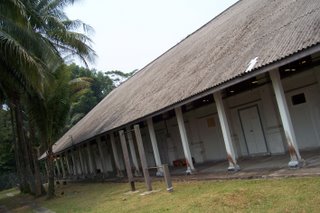 What you see and read here are just mere snippets of my experience. There are a lot more interesting works at the Tanglin Camp.

Please don't be put off by the location of this SB2006 site. The shuttle bus service can help making this site accessible. I can say that there are many treasures of art hidden in this peaceful corner of Singapore, the Tanglin Camp. Check it out. Till 12 Nov 2006.

Last but not the least, I thank my guide for his insightful accounts and sharings. I have enjoyed my trip at the SB2006 site at Tanglin Camp. It is definitely worth one's money and time to visit the Singapore Biennale.

What a delightful day. And you get to see it for free too. Looks cozy there. Did they just build this for the exhibition or does it exist before?

Tanglin Camp existed even before it was used as a Singapore Biennale site.

Hi Anonymous. Thank you for leaving your comments. Sounds like you have witnessed an interesting part of the history of Tanglin Camp.

You may find this blog, Good Morning Yesterday, worth a visit.

I think Blk 72 is where 18 year olds made their 1st stop in NS. We were stripped to our underwear for a physical inspection. Insightful write! Thanks. DTeo