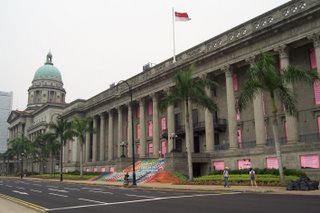 A weekend ago, I visited City Hall, Singapore, as it is one of the sites of the Singapore Biennale 2006 (SB2006). My intentions were to gain more exposure to contemporary art and to gain a better appreciation of it.

What first struck me about the SB2006 site at City Hall was that even the exterior of the City Hall building serves as an outdoor gallery for the display of the work Signs of Memory by Takafumi Hara. I was given notes about this work and I took time to read the notes to gain a better appreciation of the work. I felt that the pink panels look very effective against the neoclassical City Hall building. 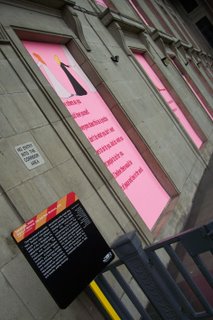 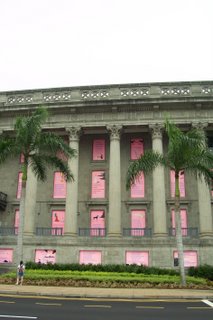 I consider myself having limited knowledge of contemporary art. As such, I decided that one of the ways to help me better appreciate the works at City Hall was to join the guided tour. The guided tour starts at the fourth level of the City Hall building. On that weekend, there was a fair number of people onboard the guided tour. As such, I did not have the luxury to have individual guided tour like Emily had. It was nevertheless a good thing, as I don't wish to be the sole focus of the guide's attention.

I particularly like a few of the site-specific works, especially those that were installed in the court rooms. It then struck me that having an appreciation of the historical background of the City Hall can help to enhance one's appreciation of some of the art works at City Hall. I have good vibes about transforming the City Hall building to a world-class gallery.

It appears most appropriate that the photographic installation titled Belief, and practices: Justice for Noorjahan, 2006 presented by Drik Pictures Library Ltd, was installed in one of the court rooms (Court Room 20). According to an article on AsiaViews, this work is a loud critique against violence against women occurring in rulings by the mullah. I felt the court room setting was appropriate as this installation made references to a landmark trial in Bangladesh.

Jakarta Post sums the story behind the trial fairly well:

Noorjahan who was abandoned by her husband, remarried after consultation with the mullah. But the mullah later changed his mind, and decreed that she be stoned. Accused of having brought shame to her family, she swallowed poison and died, infusing the historic campaign by the largest women's group in the country.

Another site-specific work that caught my attention was Verity, Faith and Justice, 2006 by Jane Alexander. I felt a sense of gloom and disgust when I set my feet into the court room that housed this work. The red-colour gloves that lay scattered on the floor appeared to represent blood being splashed in a hapzard fashion. In the article Uniquely Singapore by Walter Robinson, there is a well-taken photo of this work. However, I think the best way to appreciate this work is to go to the SB2006 exhibition at City Hall and experience it personally. The impact of this work can be lost when one merely views the photograph of it. Below is a photo that yours truly has taken of this work: 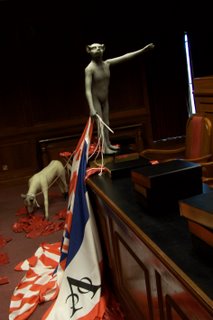 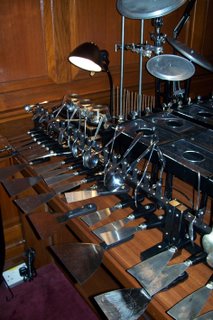 I was also intrigued by another of Donna Ong's works (see below), secret, interiors: chrysalis 20. For this work, one has to look underneath the table in order to find the crystal-like objects that emits light from time to time. Doesn't it make one feel as if one is in a crystal cave? 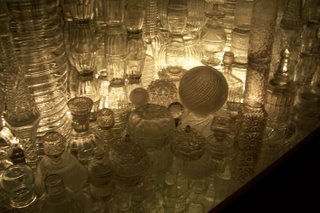 There are many more works worth viewing at the Singapore Biennale 2006 site at City Hall. Check it out. For only $5, one can get a ticket that allows one to gain one-time entry to each of the following sites: Singapore Art Museum, National Museum of Singapore, Tanglin Camp and of course, City Hall. More importantly, one gets to be treated to a number of thought-provoking, captivating contemporary works of art.

SB2006 opens to the public from 4 September to 12 November 2006. For more information about SB2006, check out: http://www.singaporebiennale.org

I liked it, you can find more Contemporary Art from spacify.