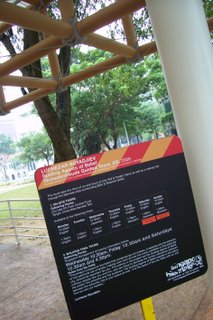 One fine Saturday morning, I headed for the Singapore Biennale 2006's (SB2006) information centre on the grounds of SMU to join one of the Walking Art Trail Tours: Stairway to Heaven.

The very first artwork that we were introduced to at the start of the walking trail was Paper House by Shigeru Ban. I have written a post on this artwork sometime ago. Check out: The paper-house at SMU.

**
The next artwork that we were introduced to came about from a collaboration between Drik Picture Library Ltd and a number of traditional artists who decorate rickshaws in Dhaka.

I did not have a good impression of this artwork when I first saw it. I found the colour-schemes to be too ill-coordinated for my liking. But I found myself beginning to appreciate this artwork after I hear from the guide that rickshaws are being phased out by the Bangladeshi government.

As best as I understand, Drik Picture Library Ltd comprises of photographers and activists. Instead of showcasing the photographs that Drik has taken, it commissioned traditional artists to decorate the rickshaws based on photographs taken by the Drik photographers.

Was it Drik's attempts to provide a chance for the rapidly disappearing traditional art form to showcase their works? Was it to increase people's awareness of the decline of the art of decorating rickshaws? Was it to remind us that without any intervention, the traditional art may soon be lost? I have no answer at all. I can only say that this artwork triggered me to ask many questions. Art often has the power to make one think of issues that one takes for granted.

Then instead of seeing the artwork as a vulgar-looking work with ill-coordinated colours, I began to see that it has a value. The pictures on the rickshaws depict scenes of everyday life. The decorations on the rickshaws also give one a glimpse to the cultural values and practices of the folks who have painted them. Beyond that, perhaps the decorations can be seen as the products of the artists' their skills and patience, the artists' sources of pride and joy. 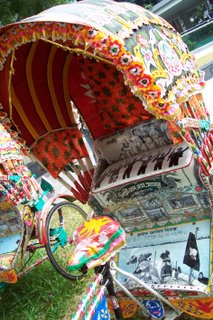 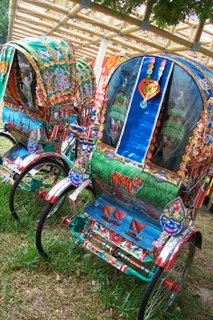 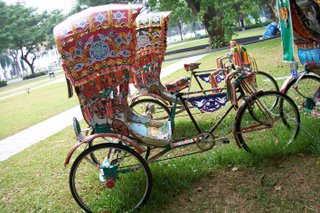 Afterwhich, we headed for the Maghain Aboth Synagogue along Waterloo Street. We were not able to view the exhibits there on that Saturday morning.

We were told that to view Jennifer Wen Ma's work that is installed there, we will have to visit the Maghain Aboth Synagogue from 2pm - 6pm, from Monday to Thursday. I also learnt that Jaume Plensa's Even Shetia is best viewed from 7.30pm - 9.30pm when the light projection is on. I heard that Plensa's work attempts to represent a connection with heaven. I wonder how it would look like to have light projected up to the skies. I shall visit the synagogue on another day then. 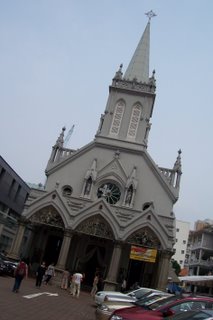 Next stop was the Church of Sts Peter & Paul. I went to take my second look at this artwork that was titled Emerging Angels. I found myself beginning to appreciate this artwork once I realised that there is actually a sculpture of an angel inside what appears to be a white block. The white block is made of a material that would slowly dissolve when it comes into contact with air. The material has a smell of mothballs. I didn't like the smell, but I was fascinated to see what looked like the wings of an angel revealing itself gradually from the white block. 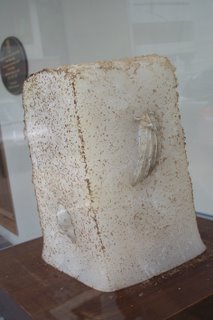 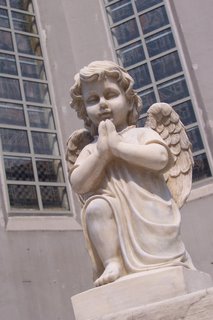 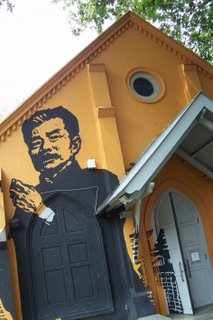 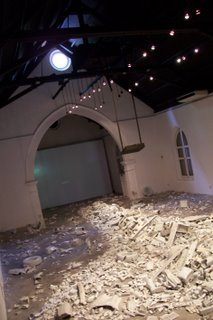 In the bright yellow colour of the building of Sculpture Square houses the next SB2006 exhibit that we were to see on the walking trail. Dream by Liu Jianhua is a mixed media installations. As I stepped into the gallery, I saw countless pieces of broken white-coloured ceramics that looked like common everyday objects. On the screen is a video about the accident of the space shuttle, Challenger.

The artwork seems to suggest that behind every endeavour, there is a possibility of failure. Yet, it is still meaningful to carry a glimpse of hope, as hope propels us forward to create the future.

***
The next part of the walking trail brought me to a place that I have never ventured to before. We were guided to take a lift to the 4th floor of a building that is part of the Sri Krishnan Temple.

I was reading the exhibition short guide after the walking trail, and I particularly like this quote that was printed together with the notes on this work:

All men whilst they are awake are in one common world: but each of them, when he is asleep, is in a world of his own

It just makes me think whether those figures in the painting installation were seeking refuge in their own world? 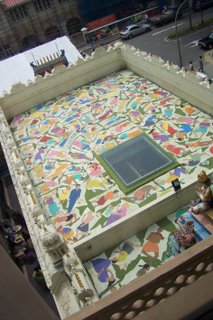 My favourite work on the walking trail was Yayoi Kusama's Ladder to Heaven. It comprises of a ladder-looking object. There are mirrors attached above and below this ladder-like object.

I think this work is ingenious. When I looked at the mirrors above and below the ladder-like object, I could see that the ladder leads to infinity. It felt as if the ladder might in fact provide the pathway to heaven and the underworld.

Yet the ladder does not actually lead us to either. It is just a matter of perception that we think that it may lead us to heaven. I thought to myself: perhaps if we were to alter our perceptions, we may find an opening that leads us to bliss, and the so-called heaven? 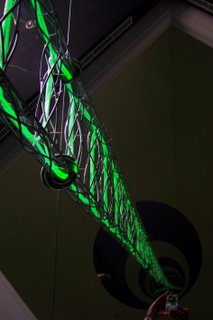 ***
The final stop of the walking trail is Kuan Im Temple. 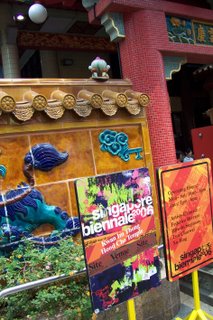 I was particularly intrigued by Xu Bing's Square Word Calligraphy. Using this style of calligraphy, Xu Bing transforms words written using the Roman alphabet into square, Chinese-like characters. On the carpet that the devotees of the Temple knelt on, Xu Bing wrote the words "Belief". It does look like a Chinese-like character, but this character did not make any sense to me if I were to look at it as a Chinese character.

I did not manage to get a picture of the Prayer Carpet, but I have got a blurred image of how Xu Bing's writing would look like on the carpet (see right below). Go and see the real thing and see if you can make the word out. 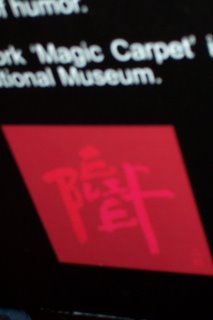 If you were to see a pot of lotus plant at the Kuan Im Temple, please take an extra look at it. It may be one of the SB2006 exhibits, Lotus Mantra. When I was there at the site, I could vaguely see writings on two of the lotus leaves. The leaves looked like they were gradually decaying, and it was difficult to make out many of the words on the leaves. 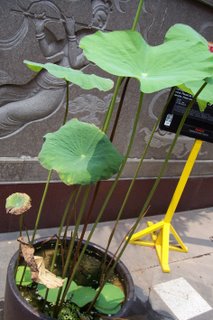 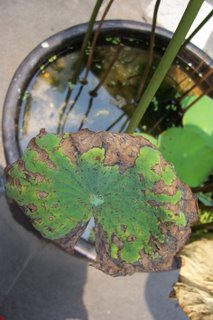 What does the artist hope to represent? If you would like to find out, please check out the Singapore Biennale 2006. I would also recommend that one gets a copy of the exhibition short guide to increase one's appreciation of the various works.

I ended the walking trail with Herrero's Painting. I have found that his painting on the walls of one part of the Temple to be pleasing for the eye. This might have been one of the most accessible works of the SB2006 considering that it is installed near one of the main exits of the Kuan Im Temple, and the Kuan Im Temple has a steady flow of devotees visiting it everyday. 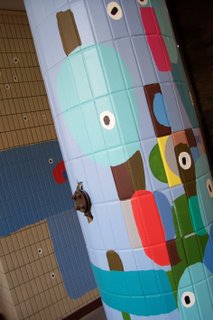 I have enjoyed this walking trail. Special thanks to my guide who has helped given me insights to the various works.

***
If you wish to experience the walking trail for yourself, please check out this URL for more information: http://www.singaporebiennale.org/programme-education-tours.html

If you prefer to view the exhibits at your own pace, you may visit the above-mentioned SB2006 sites on your own too. Check out this site for more information: http://www.singaporebiennale.org